Garage on Beck and Stoneground owner advocates for the community.
—by Sophie Silverstone

“Third space” is a term sometimes used to describe a place separate from our homes (considered our first space) and our workplaces (second space); it’s a place to socialize. According to Ray Oldenburg in The Great Good Place, a “third space” must be accessible, welcoming, free or inexpensive, involve diversity, regulars, and where food and drink is available. Third spaces are hubs of community life that foster creative interaction. This is the environment that Bob McCarthy, owner of Garage on Beck and Stoneground, aims to create.

Although he runs these for-profit businesses, Stoneground (a downtown restaurant) since 2000 and Garage on Beck (a roadhouse near the refineries) since 2008, his blood is of the non-profit kind. Growing up in Albany, NY, his dad, as well as his uncle, were the directors of their local Boys and Girls Clubs. Boys and Girls Clubs provide after-school programs for young people, often helping underprivileged kids. “It was not just a 9-to-5 job. It was his life, so it was our life,” says Bob. “We had kids staying at our house when it was needed. We were immersed.”

He brought that community awareness and connection to diversity with him to Salt Lake 21 years ago when he moved here to ski. Save Our Canyons, the Demo­cratic Party and KRCL are just a few organizations McCarthy has hosted events with over the years. This month, Garage on Beck hosts the Bunny Hop, a benefit for homeless youth on Sunday, April 20; and Denim Day, Wednesday, April 23, in support of sexual assault survivors and to raise awareness about misconceptions regarding sexual assault. 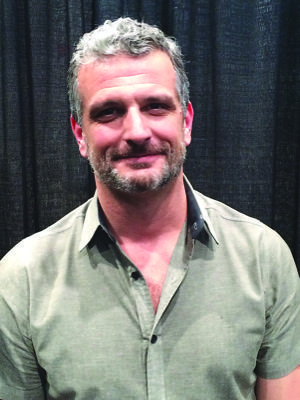 And on May 1, Joe McQueen Quartet’s performance will be held in conjunction with a fundraising event for the Forrest S. Crawford Distinguished Stewardship Award for graduate students involved in Weber State University’s Multicultural Student Center. Tenor saxophonist McQueen, who recently turned 95, has been playing at the Garage every month for over a year. He is a jazz music icon for Utah, having played with legends such as Charlie Parker, Louis Armstrong, Count Basie and Ray Charles. The event’s proceeds will be donated to the award fund to acknowledge Dr. Crawford’s energy and commitment to WSU and especially his leadership of the University’s Diversity Initiative.

Who says bars can’t do a lot for the community? Although we commonly don’t associate the image of a bar organizing events that benefit causes, McCarthy is changing that. He may not have a degree in social work, but he’s doing his own brand of social work. “Growing up as a Boys Club kid, it was in my nature. I wrote my business as a social work deal. You know, help the weak one. Even in the profit business.”