Today, I waited until noon before finally braving some steps out into our backyard. From inside, looking out through windows into the heavy sleet, the yard seemed less than inviting. But the ducks, geese and chickens didn’t seem to notice. They were going about their day as normal. Some stood eating from the food dispenser now sheltered under the covered chicken run. Some looked out on the world of the yard from behind the chicken fence.

Slipping on my garden shoes, I stepped out of the house. The ground was slick with mud and slush. I opened the gate to the chicken yard, propping it open to let the birds out. Now that our garden is put to bed for the year, we’ve been letting the birds pick the plot clean and turn and fertilize the soil.

Since our two female Cayuga ducks began laying, neither one has missed a day, and we are now going on three weeks – or is it four. The American Livestock Breeds Conservancy says they will lay 100 to 150 eggs annually. They’re on pace to beat those numbers by a wide margin.All our chickens were sopping wet. Poor Svetlana, the Polish hen, looked the worst, with her mop of wet head feathers fattened to her tiny chicken noggin. If I were a bird, I wouldn’t be laying today—too much effort in such dreary weather. But the ladies keep popping them out, and the ducks more reliably than the rest.

I can’t help but notice that the Cayugas are proving to be more protective mothers than the chickens who abandon their eggs without a care. The Cayuga ladies hang out with their eggs briefly after laying, nudging them around their “nests,” which are usually just pits dug into the dirt.

For a while there, each day was an Easter hunt, as the nervous mothers kept relocating their nest each time we robbed it. Since I started leaving one or two eggs in the nest, they have more or less settled in. The Cayugas now lay primarily in a tight corner between our property-line fence and the bird house, in a little nest on the ground they’ve gussied up with twigs and feathers. 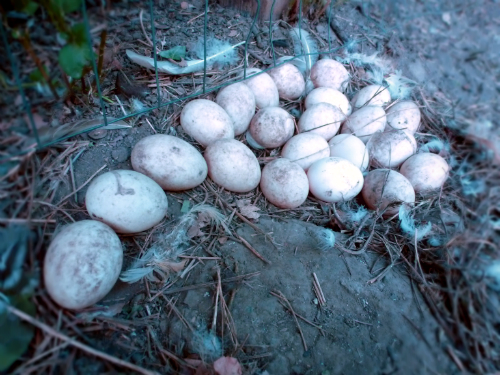 I heard from a friend recently that her young cousin got ducks this spring. They too started laying recently. But since they are not chicken eggs he didn’t know what to do with them and they ended up…in the trash! What a shame. We eat our duck eggs, proudly, and they are fantastic. I had one for breakfast just this morning, in fact. I cracked it into a cast iron skillet and cooked it over easy, leaving the yolk a little runny, just as I like it.

The differences between duck and chicken eggs are subtle. In size they are very comparable. Cracking the duck eggs takes a little more effort. The shells have a rubbery strength and break less cleanly than chicken eggs. It takes a little more tearing to get them open, and they usually end up dropping a piece of shell with the egg, which we just fish out.

The albumen or white of the duck egg are positively transparent, while the yolk is pretty normal. An old blog post on the New Agrarian confirms what I have heard about the nutritional content of duck eggs. Compared to those of chickens, the white of a duck’s egg has more protein and the yolk more fat. They can be interchanged in recipes with chicken eggs and are often preferred over chicken eggs when baking.

A few weeks ago, Ben and I took a Cayuga egg with us into the random-sports-gear-closet in our living room and closed the door. With lights off and a flame from a cigarette lighter, we tried to find signs of fertilization through the shell. We saw nothing. We do have a male Cayuga. I would hate to crack an egg and have an embryo fall out. (Sorry, was that too graphic?) However, it seems that our male isn’t fertilizing. Or, maybe we are getting the eggs early enough and intercepting the process by putting them in the fridge. 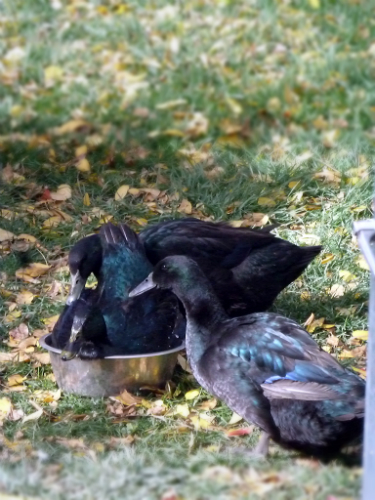 In just the last few days Ben and I have made, using our duck eggs of course, homemade ice cream, chocolate chip cookies, brownies and breakfast. And even with all that, eggs are one thing that we won’t run out of any time soon. Despite the rain, sleet, snow and mud, it took little effort to find today’s store of new eggs. The Cayuga orbs were dirt smudged and nestled down into the twigs. A quick rinse at the kitchen sink and into the fridge they went, where, together with a chicken egg, they brought us up to two shy of a dozen. ~ Katherine Pioli

This article was originally published on October 25, 2012.