Less than 15 feet from one of the busiest streets in the city, Pomona Produce thrives in stark contrast to the pavement and harried hustle of commuters. Just north of the 2100 South and 700 East intersection, this urban farm is densely planted and productive, a result of the Salt Lake City Sustainability Department’s outreach to connect aspiring urban farmers to unused parcels of land around the city—farmers like Molly Doktor, who jumped at the chance to lease this particular parcel due to the close proximity to her home less than one stoplight away.

She arrives early each morning while the air is still cool, to harvest and tend to her plants. While the sole worker each morning, she is rarely alone; as she bends to harvest summer squash, she has the extra demand of her toddler Ruben on her back.

“It’s a blessing and a challenge. I was managing another farm before, and as I looked ahead I knew I didn’t want to do daycare. I enjoy the time we get together but I’m always chasing him out of plants,” she said with a smile. 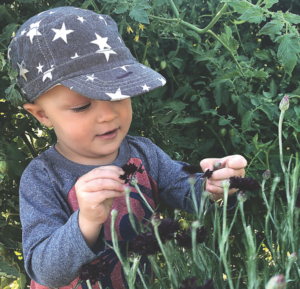 When she first broke ground with the help of her husband Tom, Ruben was only two months old. From day one, he was an integral part of this operation. When set down to stretch his legs while I visited, he promptly set to “harvesting” numerous weeds and flowers, all of which he brought to me, beaming and proud to share his farm’s bounty. It wasn’t until he started to harvest some unauthorized hot chile peppers that he was swiftly returned to his momma’s back.

When Molly first visited the site, it appeared to be mostly grass with weedy patches, but after removing the sod to begin forming the beds she soon realized what lay hidden underneath was a monstrous patch of bindweed.

“I went frantic at first pulling bind weed. I had to get it all out, all the time, but I have a slow and steady approach towards life now. I realize these things take time,” Molly reflected.

With a grant from Urban Food Connections (the organization that brings you the Downtown Farmers Market every Saturday morning and Tuesday afternoon in Pioneer Park), she was able to purchase 20-year Geotextile Underlayment, the king of all weed barriers. “I’m working to reduce the sunlight and energy for the bindweed to grow, while I patiently break down the stores of sugars it has in its roots,” she explained. “I pull it when I can. But look around—my plants are doing great and they’re outcompeting it.” And indeed, the farm looked great.

She’s also experimenting with occultation, which means “to keep in the dark.” When a crop has reached its useful end, it is chopped, dropped and covered—in her case with large, heavy-duty reclaimed billboard tarps. By eliminating sunlight, the plants are unable to grow back. By keeping it moist underneath, the microbes, insects and worms go absolutely bonkers devouring the crop residues and preparing the soil for the next planting. This results in a weed-free, friable bed of soil with the added bonus of evenly distributed worm castings.

Working a farm almost entirely covered with this heavy-duty weed fabric does pose some challenges. “Sometimes the heat on the black material is just too much for tender seedlings.  I find I need to transplant larger starts. But that’s a challenge because I only have small two-inch holes to work with in the fabric,” she told me. But she discovered that she could use a bulb planting tool to pull out a core of soil from that hole in the fabric, which left the perfect void for her larger transplants to fill.

Pomona Produce received another grant from Urban Food Connections, which Molly used to install the drip irrigation system that services the farm. “That was huge!” she exclaimed. “I knew I needed a really good watering system. I’ve dealt with crappy systems in the past.”

Next season, she is hoping to add hoops for row covers, and a shade house. “I’m intrigued by what you can do with shade. I’ve been experimenting a lot with trellises, to interplant large climbing crops like squash to create shade for more sensitive crops like lettuce.”

In addition to the 700 East site, Molly has another location where she grows microgreens indoors with the help of a part-time employee.  Se also uses this location to cool and store her produce. The microgreens side of her business allows her to stay connected to her clients year round.

She currently serves a number of restaurants, and a unique client she is proud to grow for is chef Mike Osten with local outdoor clothing company Kuhl. “They cook with fresh local food for their employees. Companies supporting healthy choices—I love it,” she said.

During my visit, I was struck numerous times by her peaceful demeanor and calm acceptance of the constant challenges small farmers face.  Like many of us in the Salt Lake Valley, her farm has faced a lot of pressure from squash bugs this year. She’s lost a number of plants, but this hasn’t phased her. “I plan ahead. I plant extra. I plan to lose some things. It’s fine,” Molly she says.

Her attitude of acceptance is impenetrable, even as morning rush hour traffic flows like a flash flood on the other side of the fence. “It’s great. People I know wave and honk. I just had some elderly folks on trikes cruise by and stopped to say hi,” she said. “It’s a very communal space.”

You can find Molly at the Pomona Produce booth every Saturday at the Downtown Farmers Market at Pioneer Park.

This article was originally published on August 30, 2019.