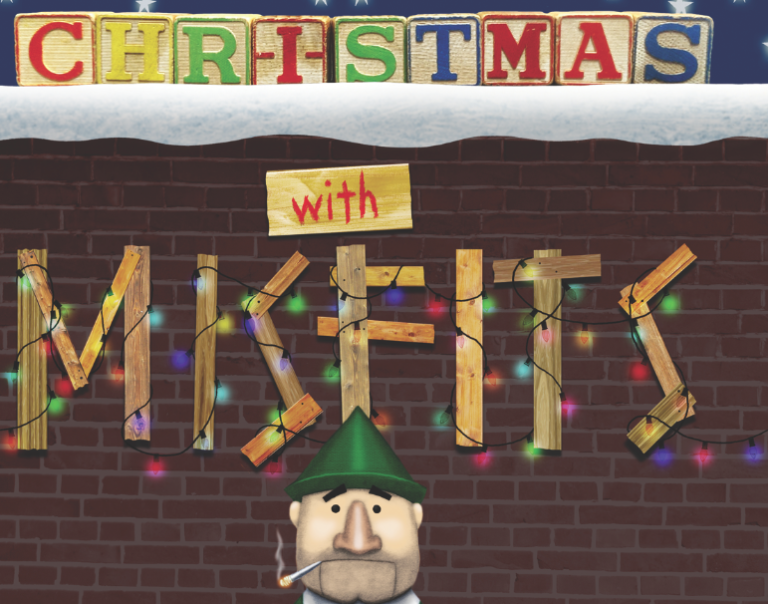 The world premieres of Christmas With Misfits, Julie Jensen’s darkly comic quartet of short plays, and Marry Christmas, Elaine Jarvik’s celebration of the first anniversary of marriage equality, may just be the region’s most unique stage offerings this holiday season.

For a long time I was a newspaper reporter, and then I was simultaneously a reporter and a playwright, and now I’m a playwright who sometimes misses daily journalism. So when Jerry Rapier at Plan-B asked me to write a play documenting the 17 days last winter when gay marriage was legal in Utah (before it again became illegal and then once again became legal), I said “yes!” Here was a chance to marry, as it were, reporting and playwriting to create a piece of theatre.

At its heart, Marry Christmas is a simple boy-meets-boy, girls-meets-girl story. You know the kind: two people fall in love and want to get married but then the Attorney General steps in. It’s a play that could have had a cast of, say, 1,300, but we settled on the stories of 14 couples, plus others—straight and gay—who were a part of those life-altering, state-altering days and their aftermath. The result, we hope, documents the jubilation and disappointment and confusion of that little piece of ongoing history.

I loved interviewing these couples about their romances and their weddings, the reception they received, both positive and negative, and their hopes for some sense of real closure in the future. “We got married and the sky didn’t fall,” Connie Anast-Inman wants to tell people. “Your marriage didn’t fall apart because of someone I love. I didn’t destroy your family because of who I am.”

There have been several drafts of Marry Christmas, as we’ve tried to keep abreast of legal developments. The Supreme Court’s decision to hear Utah’s case changed the script in October. The 6th U.S. Circuit Court of Appeals ruling in November that upheld anti-gay marriage laws in Ohio, Michigan, Kentucky and Tennessee changed the script again. By opening night there might be more news and more changes. Maybe even a Supreme Court decision to take up the matter once and for all.

I’ve been a playwright for a million years. I wrote Christmas With Misfits because I am a misfit, along with a lot of others. We do not fit in the Christmas designed by Walt Disney and Coca-Cola. That Christ­mas is really meant for children with bright eyes and parents with a lot of money. All of the rest of us are misfits.

So I’ve written four short plays about misfits on the holiday. This is one: A couple of adolescent nerds, a boy and a girl, both gay, give each other sex for Christmas. And no, they don’t like it very much.

There is also a Macy’s elf, two wheelchairs and 1,129 baby Jesuses.

Anyway, there are four of these plays, four sets of people, people I guarantee you haven’t imagined on Christmas. They’re funny, and they tell the truth, and none of the emotions are made of plastic by-products.

Finally, and ultimately, we get a chance to laugh at a holiday that has otherwise become entirely too serious and too much!

From writing this play, I learned that I can calm down a bit about this holiday. In the past, I’ve gone into fits of anger and depression at the onset of the Christmas season, which is earlier and earlier every year. But now I’m much more sanguine about it and its excesses. I feel less victimized. Instead, I think, “Oh never mind, whatever they do, however tasteless it is, I’m going to remember it and put it in a play.” It’s a nice feeling, kind of palliative revenge.

I hope those who see Christmas With Misfits will feel less victimized by the season, less tied to its expectations, more liberated to do something original with it. It’s the expectations that cause us pain, the originality might set us free. Here’s hoping…

Elaine Jarvik’s Marry Christmas, directed by Jason Bowcutt, runs December 20-23. All tickets are $20 and 100% of the proceeds benefit Restore Our Humanity as they continue to pay the bills of Kitchen v. Herbert. Visit planbtheatre.org for tickets and more information on both productions.