Permaculture Profile: Taking it to the Streets

Randy and Dea Ann Cate have a veritable food forest in the front yard of their Millcreek area home. 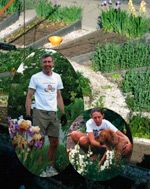 Dea Ann and Randy Cate and their two children, Nolan and Shelby, live on a corner lot with a big front yard in the foothills north of Millcreek Canyon. They bought their house in February1993 during the biggest snow year ever and had no idea what the landscaping was like.

Ann and Randy Cate and their two children, Nolan and Shelby, live on a corner lot with a big front yard in the foothills north of Millcreek Canyon. They bought their house in February1993 during the biggest snow year ever and had no idea what the landscaping was like.

Spring informed them that the front yard was overgrown juniper and grass; the backyard, steep-sloped and shady. For the first few years, like any good suburban home-owner-at least according to the historical definition-they watered, fertilized and mowed.

Then, inspired by the xeric garden of neighbor Franci DeLong, owner of Xeriscape Design, they ripped out half the lawn and planted drought-tolerant plants, including native sagebrush, rabbit brush and yarrow.

About seven years ago, Randy decided to convert the remaining streetside green expanse into vegetable garden.”This was pretty radical for our neighborhood,” says Dea Ann.

He designed 18 pie-shaped raised beds on two levels to follow the contour of the yard.

“I couldn’t envision what it would look like when he proposed the idea,” Dea Ann admits. “Then he did these beautiful drawings and I was convinced. He had no model to work from.”

They planted irises at the end of each bed so there would always be something tall, green and colorful in spring before any vegetables grew. At the center of the garden he built a sandstone patio. With a long brown pole serving as noman (the stick that casts the shadow) and brass house numbers mounted on the wooden beds at ground level, the garden also became a giant sundial.

In addition to a variety of vegetables, the Cates are cultivating a proper “food forest,” with trees, vines and bushes that provide edibles for them and for wildlife year after year.

Randy, a homebrewer, began growing hops last year, too, with plants he got from the Beer Nut. They have two beehives which they keep in the back yard, and are hoping Salt Lake County will decide soon to allow county residents in the unincorporated areas to keep chickens. “We didn’t know it when we started, but this is all part of the permaculture philosophy,” says Dea Ann.

Nolan sometimes pines for the days when they had grass to play on. Luckily, a kind neighbor across the street, Mrs. Nakamura, shares her very flat lawn with Nolan and his friends. Shelby says she thinks the garden make their house unique and identifiable-and, indeed, you can see it on Google Earth.

The Cates have learned as they’ve gone along, so have their neighbors. Dea Ann says for the first two years, passersby would look skeptical, occasionally asking a few questions. Then one day an older neighbor who was out walking stopped to say she thought the garden was good for the neighborhood. “I think perhaps she meant that people had accepted it and become more tolerant,” conjectures Dea Ann.

“Now I frequently see tomato and pepper plants in flower beds. A few weeks ago several families planted a huge garden together to share,” she says.

Dea Ann is currently working on breaking ground at their church for a community garden much like their front yard (with help from Wasatch Community Gardens). “Think about all the available space to plant food! Randy gets a dreamy look when I talk about it , as if he needs more space!”

Clearly more people these days are willing to expand their idea of what suburbia ought to look like, and with role models such as Dea Ann and Randy Cate leading the way, it’s looking pretty darn good.