Pay at the Pump: Uncovering the True Cost of Gasoline

Like it or not, the automobile is central to the American way of life, and so is the promise of inexpensive gas. But without government subsidies and other economic trickeries, the price at the pump is a pipe-dream. 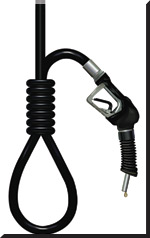 If you’re like most Ameri­cans, your visits to the gas station to fill your vehicle’s tank are workaday, and your behavior nearly robotic: Roll up, pop the gas cap, swipe your card, pull up on that black handle and watch the numbers on the pump tick away your hard-earned money. That is until the price per gallon starts climbing, as commonly happens every summer—then we really start paying attention.

If you’re like most Ameri­cans, your visits to the gas station to fill your vehicle’s tank are workaday, and your behavior nearly robotic: Roll up, pop the gas cap, swipe your card, pull up on that black handle and watch the numbers on the pump tick away your hard-earned money. That is until the price per gallon starts climbing, as commonly happens every summer—then we really start paying attention.

The high watermark is usually reached in midsummer, as happened in July of 2008 when the average price at the nation’s pumps hit an all-time high of $4.11. But soon enough, typically in Septem­ber, prices begin to ebb as does the communal furor over high gas prices.

Like it or not, the automobile is central to the American way of life, and so is the promise of inexpensive gas. For a good part of the year, prices are low enough that most of us drive around and fill our tanks without putting up much of a stink. In fact, gas in this country has averaged the relatively modest inflation-adjusted price of $2.37 a gallon for nearly a century. Last year’s average was $2.35.

But does $2.37 a gallon begin to cover the cost to locate, secure, extract, transport, refine, market and manage oil? If not, do we really want to see the “real” price on gas pumps across the country?

A primary factor in the cheap gas equation is government subsidization. {quotes}Government subsidies have kept the price of oil, and thus gas in America artificially low since the petroleum industry’s nascence in the early 19th century.{/quotes} But it is difficult to track all those government subsidies, add them up and then break them down into per gallon numbers. The largest petro subsidies bear some cumbersome names: the Expensing and Development Costs Credit, the Percentage Deple­tion Allowance, the Alternative Fuel Production Credit. All three of these (and other, even more arcane subsidies) are at least superficially intended to boost fossil fuel production on good old American soil.

The Texas Comptroller of Public Accounts did add up all the subsidies, royalties and tax credits and concluded the petro industry walked away with an estimated $3.5 billion in taxpayer money in 2006. Add that to the cost at the pump.

In the Netherlands, a gallon of gas at $7.82 includes $3.50 per gallon in taxes. The Dutch also tax new car sales at 25%, and in November, Dutch politicians passed a law compelling drivers to install GPS devices in their vehicles so they can be taxed seven cents USD (increasing to 16 cents by 2018) for every kilometer they drive.

In Utah, we pay a total of 42.9 cents per gallon on state and federal taxes, about five cents less than the national average.

After factoring in government subsidies and taxes into our gallon of gas equation, we’re still a ways from understanding the real cost of gas. To get a better idea, we have to factor in a host of externalities—the side effects, both monetary and otherwise, of producing and consuming gasoline. Externalities, or spillover costs, impact parties not directly involved in a transaction.

Say you buy a cup of coffee at a café. Your purchase directly affects you and the coffee shop, but the impacts of your purchase can also be felt in Panama by employees of the coffee plantation who grew and harvested the beans.

In the case of oil—a truly global industry if ever there was one—the list of externalities is long and smudgy. What do we count as an externality related to oil? Some people argue access to oil in the Middle East was the main impetus behind the U.S.’s invasion of Iraq in 2001. Do we count the entire cost of that war as an externality? What about the far-reaching effects of America’s vast auto-driven urban sprawl?

They also cause air pollution—which may result in the need for more of those ambulances.

Calculating for externalities is tricky work, but back in 1998, the Inter­na­tional Center of Technology Assessment (ICTA) compiled a comprehensive report that factored in just about every cost they could think of that’s associated with gasoline production and distribution. According to the ICTA’s findings, the total external and social costs of gasoline were valued at $1.32 trillion more than a decade ago: $1.7 trillion in inflation-adjusted USD. (The ICTA report valued government subsidies at $9.1 billion on the low end and $17.8 billion on the high end. That should give you an idea how theoretical these calculations are.)

In 2007, the Earth Policy Institute took the ICTA numbers, added in the cost of oil and gas consumption, figured in inflation and calculated that the average real cost of a gallon of gasoline in this country should have been $11.92 in 2006. Adjusting for inflation, we’d be paying $12.75 at the pump on average if we were shelling out the real price of gas.

But do we want to? “The practice and promise of cheap gas underlies all of our businesses, development and personal patterns,” says “Oil on the Brain” author Lisa Margon­el­li in an email. She seriously doubts the economy could survive at real gas prices, or that Americans would be willing to pay the real price of gas. Even, says Margonelli, if some would theoretically would like to see them rise, they won’t be happy when $6 gas hits the rest of the economy and everything grinds to a halt. She also notes that high gas prices would particularly endanger normal life in rural states like Wyoming and Mon­tana, where public transit is still a fairytale.

Do we allow low gas prices to continue to incentivize the slow destruction of the climate and potentially life as we know it? Or do we advocate for the real cost of gas? Margonelli’s advice is to reveal the external costs of gasoline at the pump—but not charge for them. She says it would be “interesting and helpful to require gas stations to print the ‘uncounted’ costs of gasoline on gas receipts so that people see, hey, I just paid $12 in tax subsidies for oil drilling when I filled my tank.” Not a bad idea. Perhaps we’d start watching our gas consumption the same way we watch our waistlines.

What’s more likely to happen is that the status quo will be maintained until it is no longer possible to do so. Till then, it’s like the ebb and flow of gas in our tanks. Every summer, we’ll watch prices at the pump rise. We’ll make some hubbub, channel some collective fury towards the black-blooded oil companies that gouge us year after year. And then when prices begin to drop, we’ll turn our attention back to whatever it was we were distracted by before we were distracted by the price of gas.