Smart design is nothing new. For Millennia, before our fancy furnaces and air-conditioners, people stayed comfortable by using the principles of passive solar heating and cooling.

The Anasazi village at Mesa Verde National Park, made famous by the photography of Ansel Adams, is placed within a cliff not only to avoid intruders but to avoid the heat of direct sunlight in summer and absorb heat from the low sun in the winter. 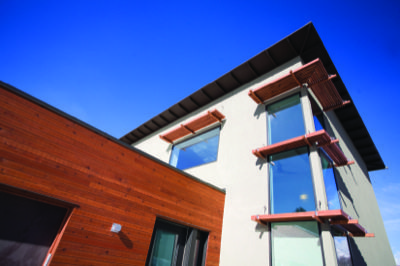 The first certified passive solar house built in the western United States, the Breezeway House, was built right here in Salt Lake County’s Millcreek Township in 2010, incorporating passive elements such as southern-facing windows, insulation and sun blades. “It was the first time I integrated energy modeling software technology with architectural design,” says Breezeway architect Dave Brach of Brach Design Architecture. “Summertime cooling is a big issue in Utah,” says Brach. “Correct orientation of windows and proper shading is the biggest challenge.” At the Breezeway House, a maple tree helps shade two west-facing windows, while canopies on the south side shade windows from the sun.

Architects in the Persian Empire created an ingenious form of passive air-conditioning called Badgir, or wind towers. Still used today, these brick towers extend above the rooflines where vents capture wind, filtering it through wet screens. The cooled air then falls down the tower into rooms below. In the absence of wind the flow reverses, pulling hot air upwards and out of the building.

At the Massachusetts Institute of Technology, a 1930s project called Solar 1 began an influential modern investigation into passive designs. Solar 1 was the first house in the U.S. to be heated by the sun’s energy using solar radiation during winter as well as to experiment with solar power generation.

Today, increasingly more people are rediscovering and reapplying passive solar designs and techniques to modern buildings and homes. Here in Utah, Zion National Park’s visitor center, built in 2000, incorporates all of the most important aspects of passive design: good insulation, natural ventilation, heat capture with a Trombe wall, and down-draft cooltowers. In an age when inefficiently designed buildings account for 65% of total energy consumption in the United States, the passive designs used in Zion’s visitor center have slashed energy use across the board. Energy used for heating is down 64%, for cooling 95%, and for lights 73%, over all saving the Park $14,000 annually.

What is passive design?

Passive solar starts with the sun. Imagine where the sun rises in the winter, low and to the south. Now think of where the sun will rise tomorrow, just weeks after the summer solstice. It will be high, almost directly overhead. Being able to heat and cool passively involves knowing when and how to avoid this sun when you want to cool, and conversely to utilize the sun when you want to heat. It can be as complicated as designing your home to be south facing with large windows and dark heat-absorbent floors, or as simple as knowing when to open and close the windows in your house. By learning these techniques and making even slight modifications, you can potentially meet 60% of your heating and cooling needs simply through use of passive solar principles.

In 2010, Jorg Rugemer, an associate professor at the University of Utah’s School of Architecture, set out to build a zero-energy home for his family using the principles of passive solar. Two and a half years after moving into 125 Haus, a beautifully aesthetic expression of modern architecture nestled at 7,000 feet into a forest of pine trees, the experiment has proved a success with the family’s annual heating and cooling costs averaging $21 a month. 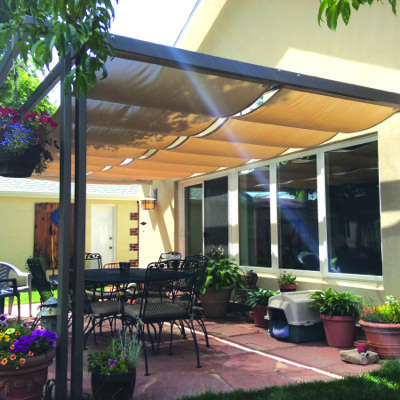 Another Brach design, the YW House is a retrofit of an old 1940s brick home. The collapsable awning over the windows and patio also blocks sunlight during summer and can be removed during winter to allow sun in.

Obviously, when it comes to summer cooling, the Rugemer family has it easy. It doesn’t take a genius to realize that cooling a house at 7,000 feet requires little more than opening windows at night to let incool air. But Rugemer has not always had a home in the mountains.

“We lived in a two-story brick house in Salt Lake,” recalls Rugemer, “and very rarely used our air conditioning.” While all around him, neighbors cranked the A/C to cool their homes, Rugemer used the same trick he uses at 7,000 feet, one vaguely similar to the idea practiced by the Persians, opening windows as night and closing them during the day. While north and east-facing openings lose as much heat as they gain, and thus are not useful for capturing or reducing solar heating, they are perfect for cross ventilation. Channeling wind through a house can draw in cooler air and push out the warm stale air.

While techniques like strategic opening and closing of windows don’t require any remodeling, some minor structural changes, suggests Rugemer, will make passive heating and cooling more efficient and effective.

Sealing windows, doors, attics and other gaps in a home is the first place to start. “Every gap lets energy out,” says Rugemer. “An airtight environment allows heating and cooling to be more easily regulated through a heat recovery system ideally with a high performance filter.”

Finally, Rugemer likes to focus on window shades in his passive design. “I will never understand why Americans put their blinds on the inside of the window,” says Rugemer who, having grown up in Germany, far prefers the European design with external shutters. “Placing blinds inside the glass actually captures heat,” he explains. “With internal blinds, about 80% of the energy that enters the window becomes trapped and disseminated into the building.”

Instead of using blinds to block sun and heat during the summer, passive designs often use an extended, overhanging roofline, easily one of the most recognizable aesthetic elements of passive designs. The famous architect Frank Lloyd Wright used this technique in his Prairie School design, creating an extended roof that blocked the high summer sun from shining directly into window and allowed low winter sun to enter.

Rather than changing an entire roofline, blocking sun from entering windows can be as simple as planting a tree on the south side of a house allowing the summer foliage to block sunlight. (Get advice on the proper tree to plant for your conditions.) Or it can happen by adding sunblades—aluminum or wooden extensions placed over the top of windows, an excellent solution not yet common in the U.S.

“Often,” says Rugemer, “passive techniques are just a matter of changing habits.” Or, one could say, of going back to ancient ones. 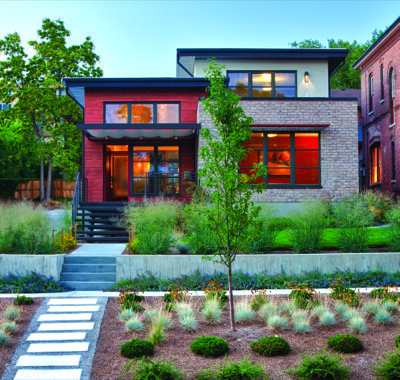 With the Ruby House, the first certified passive solar house in Salt Lake City, completed in 2011, part of the challenge for Brach Design Architecture was keeping the remodeled home in harmony aesthetically with its neighbors in the Avenues historic district. Using materials like wood, brick and stucco to retain an early 20th century quality, the remodel incorporated low solar gain windows with shade canopies and a seasonally adjustable roof over the porch that could be removed during the winter.

This article was originally published on July 1, 2014.