The Wasatch Front supports a growing legion of foodies and environmentalists interested in sources for fresh, organic, locally-grown—and, of course, delicious—fruits and vegetables. But would-be locavores may be unsure where to turn for produce beyond a weekly visit to their local farmers market, and would-be urban homesteaders long for more information than the seed racks at big-box home and garden stores can supply. While institutions like the Downtown Farmers Market are vital for the role they play in supporting small-scale, organic agriculture, the concept of community is key for many consumers and gardeners.

Luckily, finding sustenance from the local community is possible even in the heart of the Salt Lake sprawl: Whether you prefer your dishes salted with the sweat of your own brow, or you find that the fruits of someone else’s labor taste the sweetest, up-and-coming urban farmers Carolyn Kenyon of Kenyon Organics and Sharon Leopardi of B.U.G. (Backyard Urban Garden) Farms are bringing the products of their passion for sustainable, healthy and local food to your table—and if they aren’t literally in your backyard yet, well—the growing season is just getting underway. 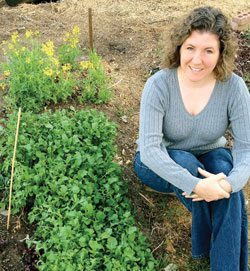 Carolyn Kenyon focuses on providing heirloom seeds or plant starts for the home gardener. With a degree in interior design, it seems that Kenyon wasn’t always destined for the physically demanding, dirt-under-the-nails life of a farmer, even one located in the urbane environment of a major city. And happenstance rather than fate played a role in setting Kenyon on her current path. Kenyon says that she just wasn’t that in to tomatoes—until a friend turned her on to heirloom varieties. And Kenyon remembers thinking, “if heirloom tomatoes were so much better, maybe heirloom peppers were better, too…” a train of thought that grew organically until she became fully invested in the idea of healthy and sustainable local food.

During this time, Kenyon noticed a disconnect between food and health, even among her own friends and family, and she considered starting a business that would let her share the benefits—to human health, to the environment, as well as to the taste buds—to sustainable and healthy food. However, she had another roadblock to overcome: As a resident of Sugar House without land of her own, she lacked the means to put her plan into action. In 2008, a neighbor granted Kenyon the use of a backyard plot, and that season, she started her operation by planting 300 tomatoes and selling the produce at the Downtown Farmers Market.

She has since backed off on produce—planning to provide only that which she can sell at her own produce stand—but Kenyon has expanded her commitment to helping others in the community enjoy heirloom varieties in their own gardens, through seeds and starts. Kenyon Organics offers over 500 varieties of heirloom veggies, with over 150 varieties of tomato alone. Since 2010, Kenyon has been developing her own lines of non-hybridized heirloom plant varieties. And while her operation has expanded to include four plots in Sugar House, two in Holladay, and a couple of employees, Kenyon does all of the selecting for her lines herself, breeding for flavor and nutrition, as well as incorporating the feedback of her customers in creating the next generation of plants.

Sharon Leopardi started B.U.G. with a model based on the SPIN (Small Plot INtensive) agricultural model: “SPIN provides a helpful framework with which to manage a highly productive, small scale, urban, sustainable farm.” Some of the tenants of this model focus on plots less than an acre in size—a perfect fit for an urban farmer—and high-intensity planting regimes for many different crops. Leopardi sells her produce to a variety of local restaurants (you’ll encounter her produce at Copper Onion, Pago, Forage and Caffe Niche, to name a few,) but most of her effort is put into running a CSA (community supported agriculture), another tenet of the SPIN model. Members buy a weekly subscription to in-season produce—a model Leopardi prefers to that of the farmer’s market. Knowing the numbers ahead of time, Leopardi can tailor her efforts to the output needed to feed her members: “I know that the food will be used, that no food with go to waste.” 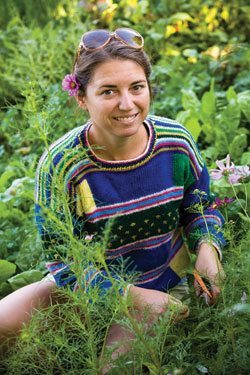 Leopardi’s route to urban farmer wasn’t a given—Leopardi’s parents weren’t gardeners, and she admits to sharing the near-universal hate that most children have for yardwork—but for Sharon Leopardi, it grew organically out of her interest in the natural world, and especially, her love of Utah’s deserts. While pursuing degrees in geography and environmental studies at the University of Utah, Leopardi took every class that would let her get out of doors, preferring to feel a connection with a place, rather than to the idea of it. One spring, she took a class about global environmental issues with Fred Montague, a local leader on the Utah sustainability and urban homesteading scene, and the author of Gardening: An Ecological Approach. Fired by the idea that growing one’s own food was one of the most radical things a would-be environmentalist can do, Leopardi got her first plot that summer at a community garden.

Leopardi gained more experience by WWOOFing—the World Wide Opportunities on ORganic Farms (http://wwoof.org) pairs volunteers up with organic farms, allowing experienced farmers share their knowledge with newcomers. She worked for Wasatch Community Gardens. In 2009 Leopardi launched B.U.G. Her goal was to provide food to the local community using local resources. Her primary plot is located near Wasatch Commons co-housing, but she maintains several plots located near the homes of her employees.

For Sharon Leopardi the relationship between consumers and the people growing your food isn’t limited by a single transaction. B.U.G. Farms sends out weekly emails that share updates about what’s happening in the garden and suggested recipes that help members figure out what to do with their assortment of veggies. Leopardi also plans more social events based on last year’s end-of-season potluck—another way for her community of locavores to stay connected with the land and with the people growing their food, even when the demands of family and work. And while she doesn’t require CSA members to pitch in, those interested in learning more can speak with Leopardi about volunteering or other ways of supporting or being involved with B.U.G.

Carolyn Kenyon likewise sees her commitment as extending beyond the simple act of handing over seeds to would-be gardeners: “I want people to start up urban farms: I don’t consider it competition, I see it as working towards something together.” In the winter months, before the demanding labor of prepping beds and tending plants becomes too onerous, she hosts “Seed Saturdays,” weekly open-house events that allow visitors to peruse her seed selection, but also to ask questions and seek advice one-on-one about their gardening trials and dilemmas.

Although Carolyn Kenyon’s and Sharon Leopardi’s farming operations differ in their methods and goals, both ultimately focus on seeing that the local community is fed sustainably, at least in part, from its own land-base. And for both, the commitment to community goes beyond the commercial aspects of selling produce, plants, or seeds, to the kind of education and community connections that are truly nourishing.

Sign-up for new or returning CSA members is ongoing for the 2012 season. http://backyardurbangardens.com

Focusing on heirloom plants for the home gardener. Visit the website for more information, or visit the Etsy shop for seeds:

This article was originally published on March 30, 2012.