Outside the Box: What’s in a Diagnosis?

Knowing the name of the demon can make all the difference in recovery.

The summer I was eight, I experienced one of the most frightening things that has ever happened to me. I woke up one morning with a slightly sore throat and begged off school, but by midmorning, as I sat on my bed, the right side of my face began to feel a little strange—I was losing the ability to move my facial muscles. The paralysis came on like a thunderclap; within half a minute of the first tingling sensation, I was utterly unable to move any part of my face that lay to the right of the midline. I couldn’t even blink my eye.

I was terrified. I ran to find my mother, crying hysterically. So began an odyssey into various doctors’ offices, of being shuffled around and poked and prodded and having lights shone in my eyes and ears and down my throat. A specialist finally put a name to my syndrome: Bell’s Palsy.

The problem was, nobody could say why I’d been struck down. Bell’s is not a disease like chickenpox—it’s a name for a constellation of symptoms, but it doesn’t describe a pathogen or give an ultimate reason for why those symptoms are occurring. The facial nerves on the right side of my head had become inflamed, the doctors said, and they had swollen up until they were too large for the foramen, which is the hole in the skull they run through to reach the brain. The pinch point had caused the signals in the nerve to be cut off, and the result was paralysis. But why had the nerve become inflamed? Nobody knew. The best theory at the time held that sleeping under a fan was somehow the culprit. I wasn’t convinced, even at eight. A bit of circulating air in the room seemed to be a poor reason for a facial nerve to go so horribly wrong. It was, I thought, a pretty weak diagnosis. 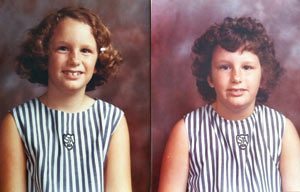 The word diagnosis is the application of a Greek word meaning “a discerning, distinguishing,” from two roots, dia meaning “apart,” and gignoskein, “to learn.” To provide a diagnosis is an act of separation—by corralling someone’s symptoms and drawing a line around them, we hope to find the ultimate cause of the suffering. A diagnosis defines our disease as something that is other from us, something that we can understand conceptually and hope to rid ourselves of. A satisfactory diagnosis provides us with the comfort of understanding what’s happening. Even though there still isn’t a cure for the common cold, knowing that we’re suffering from a simple virus that will run its course in a few days allows us to relax into our short-term misery.

The doctors treated the inflammation with corticosteroids and I did regain the use of that half of my face, but nobody could tell me how to avoid getting Bell’s Palsy in the future. I had a second round with it, on the left side this time, when I was 11—and a third occurrence, on the right again, when I was 12.

Worry is one key to illness; the mind and the body are a single contiguous system. Stress wears us down, and stress while we are sick will wear us down even faster. I never shook the worry that Bell’s Palsy placed upon me, in part because I didn’t get a proper diagnosis. Though it was apparently gone from my body, I sensed its lingering. Often fatigued and always afraid the paralysis would come back, at 16 I suffered with a cranial neuralgia that still affects me today, and in my 30s developed pain­ful ulcers in my mouth, sinuses. I knew something was wrong. I needed a diagnosis, so I started pursuing one.

Five years of testing later, I had my answer: cold sore virus. This very common disease (worldwide HSV infection rates are 65% to 90% of the human population) never caused sores on my lips, but made a bee-line directly for the cranial nerves where it has been causing painful mischief ever since. Antivirals help with the outbreaks, but more than that, the diagnosis gives me a sense of understanding about the disease. I have a relationship with the “other entity” that shares my body—and I’m not so afraid of it now. With a formal name and a conceptual separation from my understanding of my self, this demon is far less fearsome.

Having had such spectacular symptoms and nothing concrete to blame them on, through the years I had come to sense that my body had arbitrarily betrayed me. Finally seeing my tormentor face-to-face (so to speak) was a great relief. He even began to take on a kind of personality: grouchy, headstrong, but with a catlike side that occasionally just wants a little attention.

These days when I feel the neuralgia starting to work itself up, I can turn my attention to this “being” I’ve defined and ask him, “Hey, what’s going on? What do you need?” This calms me down, and in that calm state I can take actions that will speed my healing. 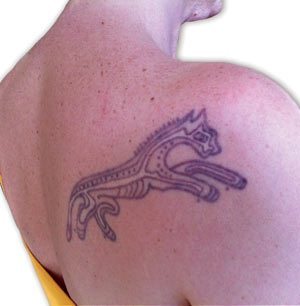 The sense of living with more than one agenda being played out in my body predated my diagnosis by several years. I even had a cat-eared leaping “animus” figure tattooed on my right shoulder when I was 27—something that has probably influenced my idea of what this herpetic demon should look like. My choice of the right side was intuitive, but it is perfectly representative; the nerve involvement stretches down into my shoulder and collarbone on that side.

Seeing the demon and knowing its name is so important, even if the patient himself can’t understand what’s happening. A recent article for the LA Times details the case of Stu Bryant, a victim of frontotem­poral dementia. Stu himself has lost the capacity for understanding his disease, along with the mass of his deteriorated frontotemporal brain lobes—but having a diagnosis has allowed his family to react to his disease and the bad behavior it causes with sorrow and empathy rather than anger and distance. Without an understanding of what’s going on, the family of someone with dementia can feel deeply betrayed by them. What’s wrong with Dad? Why is he suddenly so argumentative and uncaring all the time?

The mental deterioration of a parent can cause a great amount of confusion and anxiety inside the “body” of the family. Caring for a person stricken with dementia is incredibly difficult, but having the comprehension of the disease that comes with diagnosis can at least provide carers with some context. There is comfort in understanding, and it can expand our ability to love, even in the most difficult circumstances.

This article was originally published on February 29, 2012.