Outside the Box: Thoughts on Steven Pinker’s The Better Angels of Our Nature 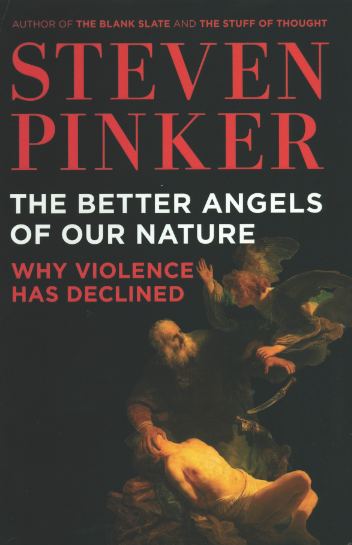 When I started writing “Outside of the Box” for CATALYST a few years ago, I had a particular goal in mind: The world seemed like it was wearing a fright-mask, and I wanted to get a look behind it to see what was really going on. We have an awful lot of media trying to keep us scared and angry. What are the actual facts of the matter? Is the human race really as badly off as all that? Are we really going to hell in a handbasket—or even a stolen Walmart shopping cart?

Since then, I’ve read everything I could get my hands on that might give me some insight into the human condition. I’ve absorbed dozens of articles from diverse websites, from PubMed and the Scientific American and the Economist to Cracked and io9.com. I’ve looked at human physiology, neurology, psychology, nutrition, culture and socioeconomic trends. I have read stacks of books, and spent hours watching scores of history, science and art documentaries on YouTube and Netflix. I have rummaged through the bowels of the Internet on reddit.com, reading about what matters to people, and watching how they cope with the challenges of their lives.

Within this colossal morass of media, one single book stands out: Steven Pinker’s The Better Angels of Our Nature: Why Violence Has Declined. Read this book. It is an astounding achievement.

Published in 2011, it runs to 700 pages excluding notes and references. It is a meticulous exploration of the human propensity for violence, and a well-crafted and exhaustive argument for the reality of its decline. Reviewer David Runciman from The Guardian calls the book “mind-altering,” and he is not exaggerating.

In spite of Pinker’s clear, warm, and engaging writing style, it is a difficult book to read—it is challenging to come face to face with just how bad things used to be. The first six chapters, over 500 pages, are dedicated to demonstrating with excruciating thoroughness exactly how demon-ridden our behavior has historically been. I am a quick reader, and it took me months to work my way through the accounts of torture, genocide, infanticide and casual murder over thousands of years of recorded history. It’s strong stuff, and it takes a while to digest. When I use these words, “torture, genocide, infanticide, murder,” I’m wrapping a nice comfortable ab­strac­tion around the concepts. Pinker strips away abstraction, providing multiple examples to go along with his claims, and graphs of data to back it all up. I had heard about “breaking on the wheel” before, but I never understood what it actually entailed until I read Better Angels. It’s awful stuff, and I’ll never look at Monty Python and the Holy Grail quite the same way ever again.

But like a bitter medicine, the payoff is immense.

Are you anxious about the future? Do you believe the talking heads when they tell you that humans are inherently evil, stupid, and destined to commit species-wide suicide? The very idea that people are somehow devolving has become laughable in the light of Pinker’s leviathan of a work. Between reading chapters of it, I spent most of my time watching history documentary after history documentary, and I have come out of this experience with an unparalleled gratitude to be living in the present day and age. I look around me and I see a swelling throng of people who are caring, compassionate, and self-aware, and who largely reject the option of violence.

I see people who endured paren­tal beatings when they were children, now raising their own kids without spanking—taking the time to un­der­stand the child’s mind and guiding them gently but firmly towards adulthood without teaching them that it’s okay to hit in anger. I see women bringing their voices to­gether in rejection of rape culture, and I see men supporting their women. I see people reaching out beyond the barriers of race and class.

The headlines tell us only the bad news. Take a second for yourself and for your sanity, and dig a little deeper. There are real reasons for optimism.

This is not to say that humanity is a sure thing. I’d give us a B+ for our progress to our present state as an intelligent, technology-using species, but there is still plenty of room for us to precipitate more mass tragedy and trauma upon our own heads in the future. Pinker acknowledges this, many times, in Better Angels. But your future relies in such a huge way on your present state of mind—if we are to use our agency to improve our lot still further, we are going to need to engage some optimism and some little bit of faith that things will work out in the end.