On the Path of the Middle Way

A Salt Lake restaurateur goes to Dharamsala to help determine the future of a culture and a nation. 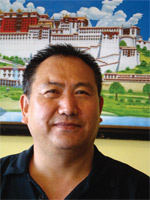 When you walk into the Café Shambala in Salt Lake City’s lower Avenues, Tswang Rinzin is there to greet you-and his smile fills the room. You just can’t help but feel good along with him. He and his wife Tsring Lhamo run the café which offers traditional Tibetan fare including butter tea and momos.

When you walk into the Café Shambala in Salt Lake City’s lower Avenues, Tswang Rinzin is there to greet you-and his smile fills the room. You just can’t help but feel good along with him. He and his wife Tsring Lhamo run the café which offers traditional Tibetan fare including butter tea and momos. A large portrait of a smiling Dalai Lama welcomes customers as they enter, and traditional music, incense and trinkets from India for sale make you want to linger.

In addition to running a restaurant, Tswang is also president of the Utah Tibetan Association. In that capacity he recently attended a meeting in Dharamsala, India, home to the Dalai Lama and the Tibetan government-in-exile. He spent six days with 560 other representatives of Tibetan communities-in-exile from around the world. The group gathered in November at the request of their spiritual and political leader, the Dalai Lama, now 73 years old, to have a conversation about the true feelings of Tibetans inside Tibet as well as those living in exile.

The Dalai Lama has spent his life working on behalf of the Tibetan people using the path of the Middle Way, -no fighting back, no violence. But recently, he publicly stated that he has failed in his efforts with the Chinese officials and that the Tibetans living in exile now must decide how they want to move forward. Although he called the meeting (and lives in Dharam­sala), he did not attend. He did not want to influence the outcome.

According to news reports, the last time a meeting of this type was held was in 1997 when four options were discussed: passive resistance, independence, the Middle Way, and self-determination. At that time, it was left to the Dalai Lama to decide and he chose the Middle Way. Since 2002, he has met with officials of the Chinese government eight times-all with no success.

“The Chinese constitution provides certain rights for other minorities within China,” explains Tswang, “rights to language and religion. [Tibetans] want those freedoms, too.”

The all-day meetings in Dharam­sala were held in the Upper Tibetan Children’s Village. Many issues were discussed-how to improve Tibetan schools and settlements in India, how to improve the general resources for Tibetans living in India, but mostly, the discussion focused on how to improve relations between the Chinese and Tibetan people. They talked about reaching out and befriending the Chinese-how this would be a way to engage directly with the Chinese people (rather than the government), whether in Canada, Belgium, Holland, Germany or the U.S.-all countries with Tibetan communities.

“The issues of Tibet are not about retaining our land or our nation,” says Tswang with concern. “It’s about preserving our identity -our culture and religion. That’s our top priority. Our second priority is basic human rights for Tibetans living in Tibet. People are suffering violence and inhumane treatment and are not able to practice their religion. There’s no freedom at all inside Tibet.”

Although Tswang was born in Tibet, he walked over the mountains to India as a boy and has no memory of his life in Tibet; Tsring was born in India and has never been to Tibet -so they represent the first generation of Tibetans to grow up outside their homeland while still living the strong traditions of their lineage through language, religion, family and culture.

By the end of the week, the group came to an agreement that they would continue their struggle for autonomy by following the lead of the Dalai Lama and the path of the Middle Way. After the meetings end­ed and before leaving Dharam­sala, they had the opportunity to meet with the Dalai Lama, who gave each of them a blessing.

Back in Salt Lake City, sitting at a table at Café Shambala, Tswang reflects on his experience. “If we can keep our culture, we can help to spread harmony, peace and freedom in the world. This will help the whole world. We are not thinking about ourselves, we are thinking about everybody in the world.”

Ann Floor has been following the Tibetan cause for over 15 years.