Notes from the Trail: Sociopathogens and the Body Politic

When you meet the vampire on the road, tell him to suck off!
by Steve Bhaerman 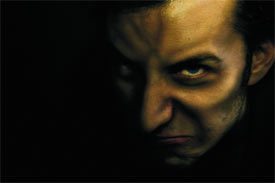 Thanks to my friend Bill Kauth who sent me back from Ashland last month with an armful of books, I've had a chance to explore the puzzling question of how bad things get sanctioned by good people. Here's the short form: Those who have studied sociopaths, psychopaths and "vampires" conclude that from 4% to 6% of human populations everywhere are incorrigible predators without conscience. These pathological individuals exert undue influence in two main ways:

1. Since they lack the restrictions of conscience, they are able to function strictly by their own rules. They are willing to do anything to anyone and hardly break a sweat about it. Because we imagine these people are "like us," it takes a long time and a long list of perpetrations before we begin to consider that maybe they're not like us. By then, the damage is done. Anyone who has ever had dealings with a sociopath or psychic vampire and ended up having their soul or their checkbook depleted understands what I mean.

2. Thanks to thousands of years of programming and the fears and anxieties of so-called "normal" life, every one of us is susceptible to getting "low-jacked" by vampires who sink their teeth into our own latent vampiric tendencies. Dr. Barbara Hort, Jungian therapist and author of "Unholy Hungers: Encountering the Psychic Vampire in Ourselves and Others" says, "In most people the vampire archetype operates as a mild or moderate infection," that can be activated by conditions in our lives. She quotes Jean Shimoda Bolen: "I am convinced we enter the world seeking love, and when we don't find love, we settle for power."

Because we are generally unconscious about how we all seek power in the absence of love, we are susceptible to the motivations of fear, selfishness, greed, envy and so on. Once we forsake the truth in our own hearts for the short-term benefits of domination, we've been bitten by the vampire. We can then "infect" others.

When you watch the movie about Enron, "The Smartest Guys in the Room," and see how gleefully young brokers gloat about some grandma losing her life savings, you have to wonder, how many of these people are natural-born sociopaths, and how many have simply been "infected" by an organization's vampiric culture?

Consider that after 9/11, the "fear gnomes" that were released into the body politic causing fear, suspicion, anger and a desire for revenge, helped create more vampires or at least kept us from noticing the vampirization going on in the name of "protection." That brings us to another thing that activates our vampiric infection-our failure to recognize our own shadow. As author Leonard Wolf has said, "We cannot see vampires because… we choose not to see aspects of ourselves that are most like those of the vampire."

Thus it becomes possible for proponents of Christianity to support preemptive warfare, and for "peace activists" to have vicious shouting matches with one another. It also becomes possible for a nation like America to excuse torture, assassination, the killing of civilian populations and the lies of its leaders because "we're the good guys."

Thus, bad things are sanctioned by good people, and the sick values of a small percentage of "man-unkind" dominate the other 95% of us, despite what our spiritual teachers have taught us and despite what we know in our heart of hearts is true.

So, what do we do about it?

and feed the soul

As Barbara Hort writes, the vampire can only exist by exploiting others, and is a "parasite that dies in isolation." Consequently, we can begin to consciously "starve the beast" in ourselves and others. How often do we give in to a fear that life really is about exploiting others, and do something against our higher judgment because someone insists it's "just the way things are"? How many times do we let a dominator's statement or attitude go unchallenged? How often do we fail to acknowledge the darkness in ourselves-and thus put ourselves at its disposal?

The currency of the sociopathogen is lies, and yet how often do we "let sleeping lies lie?" Think about it. We have been programmed to accept lies -even as we know we are being lied to. We can immediately help take these lies "out of circulation" by calling them what they are, and speaking our understanding of the truth calmly (and with humor, if possible) even to those we imagine disagree with us. Disagreeing agreeably is fine, and "cognitive dissonance" is an important stage between self-deception and illumination.

We can remember that evolution is an ever-expanding spiral of awareness and everything we've done and every place we've been up until now has brought us … here. Blame is useless and pointless, provided we accept responsibility-so we have the ability to respond differently. Shame is a weapon we have used against ourselves that gives us an excuse to remain powerless. In releasing ourselves and others from shame and blame, we unleash all of the power that has been holding those useless beliefs in place-and liberate that energy to do something more constructive.

In understanding simultaneously our susceptibility to evil and yet rejecting the notion of "original sin," we empower ourselves to choose love. While it may be that 5% or so of human beings are incorrigible vampires-put in our midst, perhaps, to strengthen our spiritual immune system-many of those who have been bitten are indeed reachable. Barbara Hort points out the poignant moment in the Star Wars series where Luke Skywalker finds out that the machinelike villain Darth Vader is his own father, Anakin Skywalker, who had gone to "the dark side." The turning point comes when Luke says, "There is goodness in you, father-I can feel it."

At that point, Darth Vader's vampire heart is pierced by the stake of loving truth, and he becomes once again Anakin Skywalker before he dies. Later, we see the transparent images of not two, but three of Luke's teachers – Yoda, Obi Wan Kinobe and his father, Anakin Skywalker-watching over him.

The good news is, we have begun to break the spell. It may not seem that way, considering the intransigence of the current administration and the continuing danger of starting another preemptive war. Nonetheless, the truth is marching on-not some ideological truth of one side or another, but the truth of what we know is true: Love is the prime force, and everything else is derivative. Consider this. Even if we've never "seen" God or any other Designated Deity, we've all experienced love. We all know how love feels, we all know how it ripples out, and we know how it creates coherence and leaves functionality in its wake.

As we hold love as our natural condition, let's look unblinkingly at the manifestations of "un-love" we have allowed to take hold in our world. Not only have we held these toxic manifestations in place through our acquiescence to the "dominate or be dominated" credo, and by cynicism and apathy, but we have held them in place by shouting, screaming, protesting-yet underneath it all being hopeless about anything ever changing.

That is the biggest area of breakthrough in the coming months-in imagining vividly and in detail how we could be doing something other than what we are doing, and what that will look like, sound like, feel like and taste like. If we are unable to do that, nothing will change. But if we can "taste" the world that our hearts ache to create, then when the wall of lies crumbles-and it will-the seeds of functionality will have already sprouted.

Parts of this piece have been excerpted from the upcoming book with Bruce Lipton, "Spontaneous Evolution: Our Positive Future and How to Get There From Here," scheduled for publication in the fall of 2007. If you'd like to find out how you can participate in this book's success, visit info@wakeuplaughing.com and put "Lipton book" in the subject line.