No Small Talk: RBG at Sundance

Nothing that Justice Ruth Bader Ginsburg says is unimportant. Scholars, lawyer and politicians study her words and will continue to study them for generations. It would make sense then that she is not a fan of chatter, this was a theme expressed many times in her new biodoc RBG that premiered in Sundance Film Festival 2018. RBG was a traditional biodoc (by Directors Julie Cohen and Betsy West) in that it spanned the long and eventful life of the 107th Supreme Court Justice, and focused on her substantial contributions to law and society. The film was a little less traditional in its overall tone, instead of presenting the good, bad and controversial, this film seemed more like a family photo album. At times, it seemed like a love note from the women of America too Justice Ginsburg. A fact I found endearing as an already devoted fan of the legal giant and feminist icon.

The film succeed in breathing some personality into the quiet and often timid-seeming Ginsburg. Some scenes gave the viewer true gems into the Justice’s personal life. Ruth frolicked on the beach with her young husband in Brooklyn, raptly watched Operas and showed off her impressive collection of signature lacey collars. All of these scenes fit well into a historical narrative that started with a youthful Ginsburg fighting for her place on the law review at Harvard, which she did–becoming the only woman to win a place. The plot then followed Ginsburg to her position as a prominent woman’s rights attorney who worked first for a New York firm and then as an attorney for the ACLU. Her job was to ferret out test cases that would set legal precedent for woman’s rights in the law. 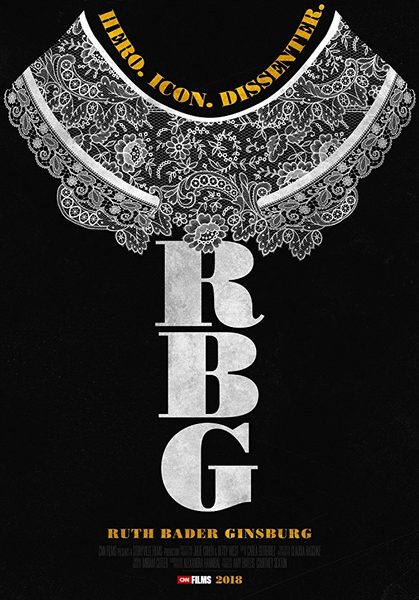 Tapes taken from Ginsburg’s oral arguments in the Supreme Court were played, emphasizing the words and turns of phrase that the then attorney would use. Her brilliance was easy to see when her clear and calm arguments were laid out on screen with none of the usual visual accoutrement. Her impressive and influential legal career was highlighted in an interesting, if very abridged manner.

RBG covers the Justice’s appointment to the Supreme Court by then President Bill Clinton. The movie focused on how hard her husband Marty campaigned for her appointment, emphasizing his charm in contrast to her shyness. Refreshingly, the movie did not shy away from their sweet love story which was obviously a huge part of Justice Ginsburg’s life. There was an underlying theme to the film that the question of “having it all” had never occurred to RBG. She both had a family and a career and didn’t consider either an impediment to the other, but rather that each was necessary to her success in the other. This theme fit well with the Justice’s story and easily highlighted the limiting and false dichotomy that woman are often asked to face.

Staying up until 4am reading legal briefs, and taking care of her cancer-stricken husband as she attended law school (and took care of a newborn baby), were just two of the many instances used to highlight Justice Ginsburg’s fortitude and grit. Not only is she currently the longest serving justice on the court but she shows no signs of slowing down, having already selected her next two terms of clerks. Justice Ginsburg also trains at the gym every day. It was more than a little amusing to watch the very petite 84-year-old pumping iron at the gym. At another moment during an interview with her adult children her daughter offhandedly remarked that her mother had also weathered two different types of cancer during her career, without missing a single day on the bench.

RBG’s new status as a pop culture icon is discussed in the context of her recent rash of dissents. The filmmakers highlighted some of the more impressive swag and even found a few folks with tattoos of the small Brooklynite on their arms. Music throughout paid homage to the Justices recent naming as the “notorious RBG” as well as her own love of classical music. The soaring classical pieces contrasted with intense rap beats perfectly convey the power and popularity of a woman who society has only recently caught up to.

The biodoc was touching and impressive. With a wonderful message of female empowerment, an all-female production staff and woman serving as both director and producer this was a hopeful and timely film. RBG is a detailed tribute, beautifully done with wonderful music throughout–and a few adorable windows into the life of a living legend.

RGB was picked up for distribution by Magnolia Pictures and Participant Media, and could be coming to theaters, home video and streaming platforms worldwide.

This article was originally published on February 7, 2018.