Kate Wheadon’s love affair with flea markets began with a pair of old leather English riding boots from a market where she lived in southern California.

The relationship developed over the next 10 years with the help of Mexican feather craft art and cowboy shirts. It ripened when she stumbled across an old gun belt, vintage towels and hand-crocheted doilies.

Returning home to Salt Lake, Wheadon wondered if a flea market of the type she’d grown accustomed to could work in the crossroads of the West. She found a business partner in Michael Sanders, a former New York City club and restaurant promoter turned downtown Salt Lake shop owner. The city and Downtown Alliance, eager to revitalize downtown, threw their support behind the idea.

Last summer, the first Salt Lake Urban Flea Market opened. Word spread quickly, among vendors and shoppers. By the end of the year, Wheadon and Sanders planned to not only continue the market in 2012, but expand.

The people of Paris, France may have inspired the modern American flea market. Around the 1860s, Parisians shopped at the “marche aux puces,” literally translated as “flea market.” The name, concludes author Albert LaFarge, paid homage to the parasites that infested the upholstery of old furniture at the second-hand sales.

These days, Americans keep the tradition of second-hand outdoor markets alive and strong. Last year, Salt Lake’s Urban Flea Market joined over 1,100 other such markets, according to the National Flea Market Association, operating in the United States. Counting all of the swap meets, open-air, antique and farmers markets, there may be as many as 5,000 such venues. Millions of people sell their merchandise at flea markets. And each year over $30 billion changes hands across the temporary counters and booth tables.

There is no end to the variety of these markets and their wares. Wheadon and Sanders wanted to avoid the hodgepodge of merchandise that can accumulate at such events, so they designed the Urban Market as a curated event, leaning towards a distinctly retro feeling. “There are parameters,” says Sanders. “We sell items that are antique, vintage or retro.” They also welcome items that are handmade and local. Committed to helping strengthen the local economy, they love providing a home for the city’s small-time, independent artists, jewelers and clothing designers.

For Sanders and Wheadon the aesthetic of the Urban Market is also a philosophy. Trash becomes treasure, and oddities like vinyl, vintage lamps and old Utah postcards swap hands instead of ending in a landfill.

For those who went to the market last year, expect some changes. The market has moved to the parking lot on the corner of State Street and 4th South (just north of the City and County Building). There will be more vendors and larger, more organized vending spaces. There will still be a handful of unreserved, first-come-first-serve spaces for vendors, but no space for food booths. Brad Wheeler of KRCL will be on hand spinning the market’s soundtrack. 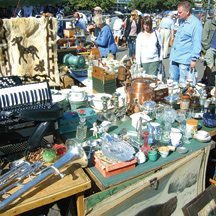 Wheadon and Sanders hope that the market puts some spice into downtown Salt Lake’s normally sleepy Sundays. Around these parts, the last day of the week is for rest and worship, whether in a church or in the mountains. But Sanders thinks that is changing. “The city is maturing,” he says, ” but businesses still don’t operate seven days a week. We need a reason for people to come here on Sunday, encourage restaurants and other places to stay open.”

Wheadon agrees that having a quirky little market to shop at on Sundays will be a good thing for the city. But, she insists, it won’t be too different from what locals are already used to. “It’s a very Utah thing,” says Wheadon, who, like many of us, grew up combing through the racks of second-hand treasures at the local Deseret Industries. Now, people can satisfy their treasure-hunting lust even when DI is closed, downtown at a flea market. fleamarketslc.com