Natural in the Valley

When CATALYST magazine began, publishing in 1982, “natural” and “organic” were still considered hippy words—like peace, love, environment and all that other kooky stuff. In Utah, the going was easier: The predominent religion encouraged a healthy lifestyle; a 1932 church publication even taught that refined flour was contrary to church doctrine.

Ed.’s note: This story is based primarily on information gathered from 30 years of CATALYST magazine, recent conversations, personal recollections, online records and interviews. History benefits from the input of many: If you have information, clarifications or stories pertaining to the early years of natural foods stores in Salt Lake, let us know. We will create an archive and keep it on our website.

When CATALYST magazine began, publishing in 1982, “natural” and “organic” were still considered hippy words—like peace, love, environment and all that other kooky stuff. In Utah, the going was easier: The predominent religion encouraged a healthy lifestyle; a 1932 church publication even taught that refined flour was contrary to church doctrine. A tradition of folk healing, with a respect for the healing powers of food and herbs, already existed. Dr. John Christopher, a Springville-based naturopath, author, herbalist and founder of the well-established (1953) School of Natural Healing was gaining national respect and notoriety.

Many Salt Lakers who marched to this interesting drumbeat shopped at Nature’s Way Natural Foods at 9th & 9th (where the Children’s Hour is currently), owned by Michael Circuit; or at a little grocery in the Avenues, Whole Earth Natural Foods.

Whole Earth was located at 1026 Second Avenue (now the home Dean Pierose’s cafe and deli, Cucina). It was started by David Ronniger, an energetic 26-year-old who had grown up in the Federal Heights neighborhood and moved to Colorado.When his father, OB/GBN Paul Ronniger, was diagnosed with cancer, David came home to help. He believed in the healing power of food. While it was too late to help his dad, Ronniger pursued the heart of his intention and opened Whole Earth Natural Foods in 1971. 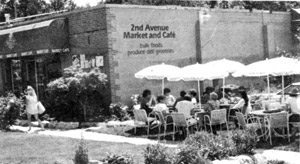 It was not the first natural foods market in the Avenues. Another had existed at 476 Third Avenue. We have several names of owners and managers, but have not been able to contact them or learn the name of the store. In the 1980s that site became the first home for Wild Rose Moun­tain Sports and apparently for a brief time shared space with the Salt Lake Food Co-Op [Watch for a story on food co-ops in and upcoming issue]. Later Wild Rose moved to its current location, also on Third Avenue.

Meanwhile in Ogden, Elizabeth (Bessie) Wight Shafer had managed the Nutrition Center Co-op since 1962. In 1970 she purchased it from the members and renamed it Bright Day Health Foods/Nutrition Center. According to her 2005 obituary, she was a well-known activist and lobbyist in the health food movement. She retired in 1995, selling the business to a granddaughter. The store closed in 2007.

David Ronniger and his younger siblings Merrily (Molly) and Stephen ran Whole Earth until 1985, when the Ronnigers sold their grocery to a spiritual community that came to town from Santa Barbara, called The Builders. 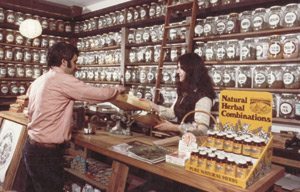 The community was led by Norman Paulsen, a direct disciple of Paramhansa Yogananda. They were a down-to-earth, hard-working people (they also owned a demolition company—they famously imploded the massive Newhouse Hotel on downtown’s Main St.), active in the community, with a lifestyle based on daily meditation practice. Due to descriptions of alien encounters in their teacher’s autobiography, they were referred to by some as the UFO people. They lived in a mansion near their grocery (on the northeast corner of I St. and Second Avenue). The Builders bought the struggling business for $20,000. They changed the name to the Second Avenue Market and Café. Brothers Ernie and Jim Shelton, longtime members of the Builders, were the friendly faces of the new store.

Soon after, Nature’s Way Natural Foods at 9th and 9th, occupying a space more than double the size of the Avenues’ store, also sold to The Builders. It became the 9th and 9th Market, with an elegant, upscale cafe. In 1987 both stores were renamed New Frontiers.

In 1988, Kathy Bauman (now Melby) opened Kathy’s Natural Foods Ranch Market and Deli in Holladay. In covering the opening of the new store, CATALYST’s Genevieve Rowles said Kathy’s was the first of the natural food stores to look and feel like a supermarket.

A year later, Rowles wrote another story describing the enormous growth of natural foods stores over the previous four years. She said they were becoming less exotic, more like supermarkets, and diversifying their offerings.

In addition to Kathy’s, Bright Day and New Frontiers, Rowles explored Kenneth Howard’s new Good Earth Natural Foods in the south of the valley and Shirlyn’s Natural Foods in Sandy, which Pam Mahstrom and Carolee Darger had just opened. Six whole stores! CATALYST was elated at such rapid expansion and eager for more.

In 1995 The Builders, aka New Frontiers, bought Kathy’s. Through the years New Frontiers upsized several times. It occupied 24th South at 7th East, where the Salt Lake Running Co. now resides, simultaneous to a Second South Eighth East market, previously a meat market, where Dollar Tree now resides. In 1996 the organization sold its Utah stores to Wild Oats, a rapidly expanding chain out of Boulder, Colorado. Wild Oats closed Kathy’s and opened and closed other locations. They maintained its holdings for 10 years. After a long legal struggle, Texas-based Whole Foods consumed those stores. 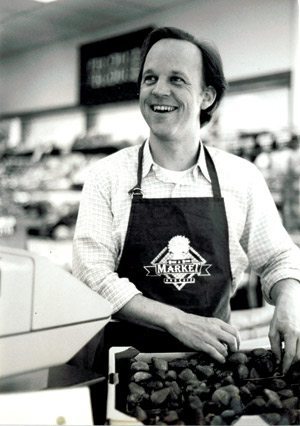 Of the six stores celebrated in Rowles’ 1989 article, two remain. Good Earth has expanded to five locations and Shirlyn’s has three. (The New Frontiers chain still operates in Arizona and California.)

In 1993, Steve Rosenberg’s Liberty Heights Fresh (11th East at 13th South) had come into the picture. Draper-based Pirate O’s also opened. In 2009, restaurateaur Ian Brandt started Cali’s Market (just north of the 18th South CostCo). These markets continue to provide organic, natural and local where possible, in the midst of major expansion from the chains.

By 2011, Whole Foods and Sun­flower Markets (which entered the Utah market in 2007) each had three locations and were expanding their operations to larger stores. Whole Foods replaced its 400 South location with its grand Trolley Square store; Sunflower Markets opened a new location at 700 East 2nd South.

National organics purveyor Trader Joe’s is slated to open its first Utah store in Salt Lake within the year in the former Old Navy location on Fourth South near the downtown Whole Foods and Sunflower Markets. Trader Joe’s positions itself as a more affordable alternative to the market that some have nicknamed Whole Paycheck.

A significant player in the local healthy food consumption scene, not present when CATALYST began in 1982, is the Downtown Alliance Farmers Market. It has grown larger and more popular since its birth in 1992. Similar markets have sprung up across the valley. In addition, food co-ops (buyers’ groups) that focus on organics have come, gone and come again.

We also have Fairweather Natural Foods in Park City; and Harmon’s, a family-owned, locally based chain. All 16 Harmon’s stores carry organic produce.

You can find organic/local/natural options at most major supermarkets nowadays. Dan’s Foods has begun exploring the realm of gluten-free living, as well, and devotes a small section of its Foothill store to celiac-friendly flours and snacks.

Holistically oriented physician Todd Mangum, M.D., is a fierce promoter of organic. He is a big supporter of the farmers market in season, and hopeful about the trend toward organic in mainstream markets, finding them more ethical than markets that pass themselves off as organic and yet stock their shelves with conventional foods.

“Sunflower Market’s signage says ‘natural meat’ when in fact the vast majority of their meats and many of the products in their store are loaded with artificial flavor, colors, preservatives,” he points out. The solution, he says, is to “read labels religiously. Keep asking for organic wherever you go. Avoid stores that are purposefully misleading, that claim they are natural foods stores but that carry significant amounts of adulterated foods. If you shop at conventional markets that carry some organic products, buy them to encourage the trend. But always read labels.”

Today’s Salt Lake City natural foods markets hardly resemble their ancestors. Natural foods are undeniably swimming in the mainstream. Nationally, sales of organic foods and beverages grew from $1 billion in 1990 to $26.7 billion in 2010, according to the Organic Trade Association (OCA).

Smaller, locally owned natural retailers now account for only 39% of organic food sales, with mass-market retailers accounting for over half. The rest of organic food sales are covered by “export, the Internet, farmers’ markets/Com­mu­nity Sup­ported Agriculture, mail order, and boutique and specialty stores,” according to OCA.

For small retailers who love what they do, the danger of being “bought up” is no doubt a mixture of blessing and threat; a retirement check is a nice consolation prize—possibly even the pinnacle of success—for a hard-working entrepreneur.

The real threat to a small, local endeavor lies in lack of support from its community; if it is taken for granted, the entity fails to thrive. Competition is still the American way in the world of business, and the game rules are not always fair. Utah’s Local First, a nonprofit founded in 2005, promotes support for locally owned businesses. Apprecia­tion for the value of local, natural and organic foods continues to rise. How this plays out in your shopping choices remains to be seen.

Former Salt Lakers Jim and Ernie Shelton eventually left The Builders. In 1990 they started their own natural foods markets in California, according to an online interview with business writer James Dunn; in 2000 they sold to Whole Foods—making them both multi-millionaires by age 50. In 2008, with a third brother, they opened another market in a northern California town of 11,000 people. They are, once again, small and local.

Greta Belanger deJong has been editing and publishing CATALYST since 1982. Hannah Korevaar is CATALYST’s summer intern; she is exactly as old as the downtown farmers market.

This article was originally published on July 31, 2012.