Tree biologist Nalini Nadkarni moves easily across her University of Utah lab on this cold, early winter morning, showing no signs of the trauma her body sustained in July, when she fell 50 feet from a big leaf maple, fracturing her ribs, pelvis and spine. She is a slight woman with calm eyes. Her speech is quick, clear and concise.

An accomplished scientist, Nadkarni’s contribution to scientific journals is extensive. Yet, reading closely, her work starts to look a little different than your average ecologist. Alongside articles she’s authored such as The use of pasture trees by birds in a tropical montane landscape in Monteverde, Costa Rica, you’ll also see, Into the light: bringing science education to the incarcerated.

Nadkarni is well known outside her field for engaging the public with science education in unexpected ways. Twenty years ago, Nadkarni realized that human activity was irreversibly changing tropical rainforest habitat. She decided to make a switch from focusing on publishing papers to spending some of her time awakening awareness in non-scientists. “Instead of presuming that everyone just loves trees and cares about them as much as I do because of their ecological values, I tried to figure out why the public values them,” Nadkarni said. 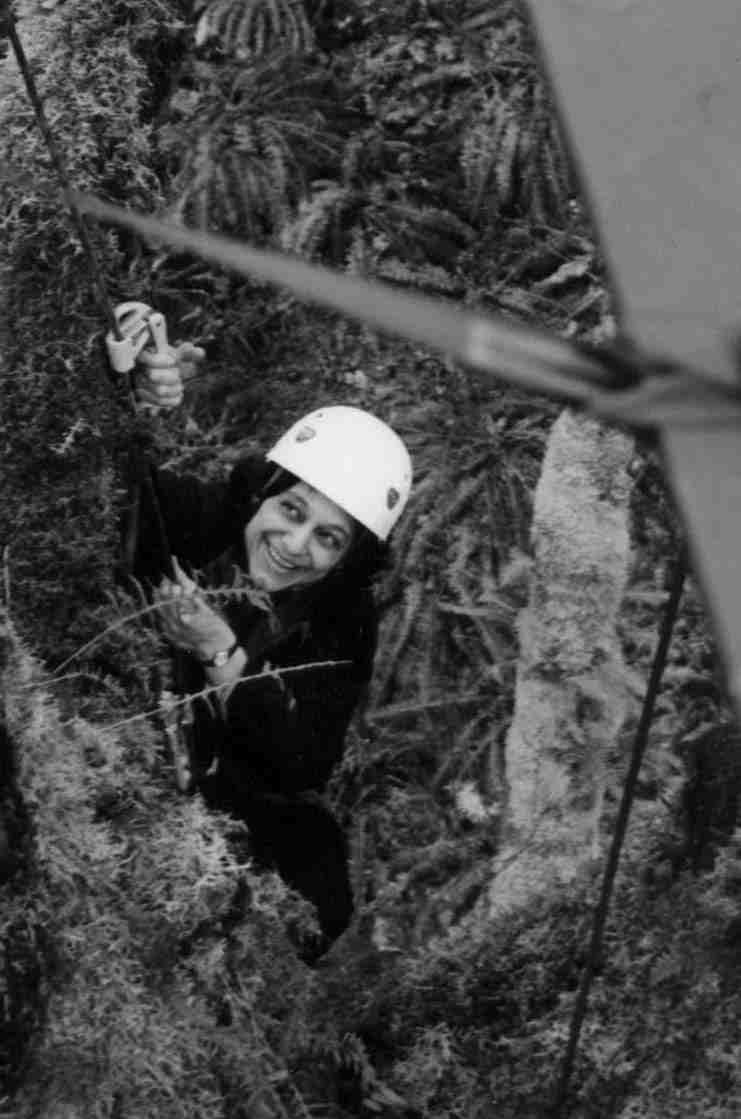 Over the past decade, this new focus has directed Nadkarni to reshape her role as a scientist through what she calls “tapestry thinking”.

“With tapestry thinking, we are weaving together threads of disciplines, ways of knowing, ways of thinking, and ways of behaving to create something that is new and different. Something that adds to how we come to understand the world,” Nadkarni says.

This thinking led her to the pulpit of a Unitarian church to give sermons, inside prisons to raise spotted frogs, and into a tailor shop to design a new Barbie doll outfit.

When Nadkarni’s daughter was six years old, she wanted a Barbie doll. Instead of denying her daughter the doll on principle, she thought, “How can I shift this iconic female image?” Nadkarni decided to interweave the image of Barbie with values of science.

“I walked into a tailor shop and asked, ‘Can you make this?’ pointing to her own field pants, khaki vest and boots. The result, Treetop Barbie, outfitted with tiny field boots, climbing pants, a rope and harness, a field vest, helmet, binoculars and a field guide, became Nadkarni’s companion to several science meetings.

A science reporter from the New York Times who attended one of these meetings liked the idea and wrote an article about it.

“After that we got tons of orders for the Barbie, all made by volunteer seamstresses.” Nadkarni says. Until one day Mattel, the doll company that makes Barbie, called up. They told Nadkarni she couldn’t keep making the dolls. Nadkarni argued that the dolls were purely educational—Nadkarni was making no profit off the dolls. She even said they could have the idea. But Mattel said no thanks.

“When Mattel said they would shut me down, I told them my journalist friends might really find this story interesting: ‘Mattel shuts down a colored woman’s efforts to inspire young girls, especially girls of color, to identify with or become scientists.’” She chuckles. Mattel gave Nadkarni a verbal okay to continue circulating the Treetop Barbie.

“This was when I started to see the possibility of potential partnerships. It became a model for other kinds of projects,” Nadkarni said.

Since Treetop Barbie, Nadkarni has explored the values of trees in a diverse cross-section of public groups. She attributes her ability to engage across the divides of discipline and doctrine to her studies in modern dance, teaching at an interdisciplinary liberal arts college and her cultural background.

“My dad was a Hindu from India and my mother was an Orthodox Jew from Brooklyn. They created a very collaborative household where we saw no difference between Judaism and Hinduism. There was an openness to ‘other’ that I grew-up with from a very early age,” says Nadkarni.

When Nadkarni decided she wanted to work with religious groups, she studied the Old Testament and found 328 references to trees and forests. She wrote a sermon and knocked on doors.

“I was up on the pulpit, not shoving science down their throats, but saying, here I am, a scientist, a Hindu Jew, and I’m here at the courtesy of your minister. I’m taking this very powerful place behind the pulpit, and I just want to tell you what I found from your holy scriptures,” Nadkarni says.

Nadkarni seems to take up these projects as they come, threading the challenges that society faces with her knowledge as a scientist. Through this, she creates new ways for the public to interact with trees and the environment.

This article was originally published on December 2, 2015.