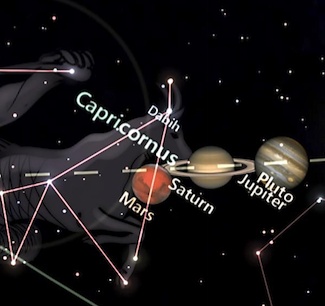 As with all things in this world at this time, major changes are afloat. This issue of CATALYST covers portions of both October and November. The next issue will be the 400th CATALYST and its last, at least in this format, for the foreseeable future.

To navigate the coming November intensity I’ve combined information from before and after the election. Please bear with me as I do my best to objectively look at the patterns unfolding over the next two months. I am removing the people and the personal from this reading; we will look at the patterns only.

No one expects the 2020 presidential election to be decided by the morning of November 4. Instead, look to mid-December, possibly December 21, after two big, bad planets move into Aquarius: Jupiter on December 15 and Saturn on December 17.

That sets the stage for a massive global shift into the progressive ideas and intentions of Aquarius. That pattern will set the stage for the upcoming year.

Because so many big planets are at their endpoints in Capricorn, the energy of big, slow-moving planets at the end degrees muddies the clarity and makes us have to really look at the unfinished issues. Clearly our world and our country are struggling to find any sort of resolution that everyone will agree with. This election will not clarify that in a way anyone wants.

In March of 2023, Pluto will go into Aquarius. This big shift marks an end of this disturbing backward motion from totalitarian leaders around the globe.

I don’t think we’ll have resolution about the past, nor will we have taken steps towards reparations. But I do believe there is a turning of the tide of consciousness.

So while this last quarter of 2020 is a mess monster of astronomical proportions, it does herald a shift of sorts. Much will still need to be done. It will take decades (yes, I said decades) to pull us out of the hole we have put ourselves in. But I have hope that at the end of this cycle, a constructive shift will begin to unfold.

In a nutshell, October is a time when the exhaustion of all this conflict really begins to take a toll on our hearts. Finding understanding and connection will be next to impossible except within our most intimate group. Family, however you define it, is everything. Stay close, stay open and available.

There is a feeling of death in the air. But from death comes rebirth. It’s the way of things in this reality. None of us can escape it. And the cards reflect that in many ways.

People are fired up, wanting answers. But answers will be intentionally withheld. When those in power are threatened, the choices and actions of those they control can be extremely dangerous.The stage is set for a dark and difficult experience.

But the card Cimi reminds us to not give up. Cimi indicates that there will be a New Way forward. The old has died.

What is clear is that we are moving into a progressive time of massive change starting in December 2020.

The actions of the last four years will take decades to correct and reconstruct. The next three years will be particularly challenging.

We will all have to discover what it will take for our country to decide to heal and come back together.

NOTE: Suzanne’s Utah visits to Salt Lake City have been canceled till further notice.. Connect with her via www.SuzanneWagner.com/