Last year I wrote about dust that often blows in from the southwest, plaguing areas of the Wasatch Front (see CATALYST, July 2018). I wanted to take a closer look specifically at the dust that comes from the Great Salt Lake. The lake remains near historic low levels, with over 500 square miles of its lakebed exposed. This is due to many factors, including low snowfall years, continued drought, and water diversions for agriculture. Perhaps one of the harshest consequences of the low lake level is for air quality: The exposed lakebed has become, in several areas, a significant source of dust that gets blown up into the atmosphere, and into our lungs.

During a Legislative Bipartisan Clean Air Caucus meeting last summer, I got to meet the perfect person for my quest.

Meet Dr. Kevin Perry, Ph.D, Department of Atmospheric Sciences at the University of Utah. Dr. Perry was chair of the department for seven years, and he is passionate about studying dust. Perry is originally from Kansas City, and like many others who end up calling Utah home, he was drawn to the west and happy to land in Salt Lake City to work for the University. “For studying air quality, this place is one of the best places to be,” he enthused. “We have really good air and really bad air. In a bad way, it’s a great laboratory experiment we are performing on ourselves, living here.” 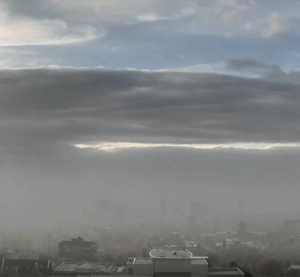 Perry has been interested in dust transport (blowing dust from one spot to another) for a long time. He published his first paper on dust in 1997. He was working for the National Park Service at that time, and found it fascinating that there was Saharan dust blowing into the southeastern United States from Africa. Seeing this foreign dust during the summer at national parks piqued his interest to identify how the dust was chemically different from the native dust, and trace it back to its source. “There is more dust in Texas in July from the Saharan Desert in Africa than from North America,” he explains.

Fast forward to June 2016. When the state was looking at purchasing the land for the prison relocation, Perry was approached to study the dust from the Great Salt Lake bed to determine whether or not there were dangerous levels of heavy metals that would pose health risks for the people living and working at the prison. The Utah Division of Facilities, Construction and Management, and the Utah Department of Natural Resources, Fire, Forestry and State Lands provided the initial funding for the study. The state needed the analysis done as quickly as possible, so Perry began to study just the areas around the new prison site.

Dr. Perry’s initial findings resulted in the state purchasing the land for the prison site in October 2016. He found no significant immediate health concerns pertaining to heavy metals.  Perry emphasized in our interview that the study was funded to look specifically at heavy metals, and not the other health effects that could result from exposure to particulate pollution in general.

After the initial study for the prison land purchase was finished, Perry continued to study the rest of the exposed lakebed to identify the portions that are active dust sources and determine if the PM10 mineral dust contains elevated concentrations of potentially dangerous heavy metals. He also worked with the University’s geography department to determine the elevation of each identified dust hot spot, providing the Utah Department of Natural Resources with information on how fluctuating lake levels may impact future dust episodes. 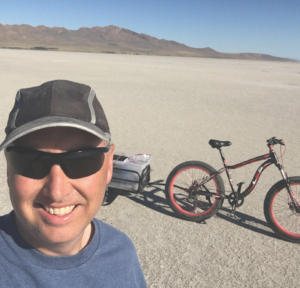 And how he did it is pretty cool. From the very beginning, Perry knew that the “crust” of the dry lakebed is crucial to keeping the dust down. In other words, he carefully chose his methods of collecting dust samples. He knew that he had to tread lightly on this fragile surface. So he rigged up a bike instead of using an ATV to minimize the damage. He calls his bike rig the “Ute Dust Devil.” To minimize bias, he decided that he would collect all of the samples himself. He took 122 trips out to the lake, and biked over 2,300 miles during his two-year study, which ended on August 8, 2018.

To collect the samples, Perry skimmed the dust off the top centimeter of the lakebed— “this is the stuff that has the potential to blow,” he explained. “I then bring the sample back to the lab and dry it out, because it’s usually pretty wet. After it’s dry, I put it into a sifter to break it up into different sizes. I’m interested in the really small stuff, the stuff that we have the potential to breathe. Then I put it into a chamber and puff air through it, sucking it through a filter, collecting the particles that are PM10 and smaller.” 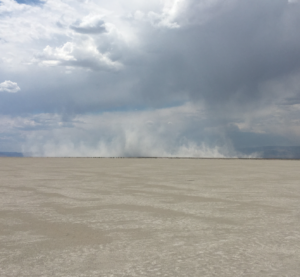 Perry focuses on PM10 and smaller because it is the dust that, once up in the air, is easily inhaled. He collects the particles and analyzes them using two different techniques. He was able to identify 53 elements that were above the detection limits.

What’s in the dust?

The highest concentration was salt, which isn’t all that surprising considering we’re talking about the Great Salt Lake. But there are other elements in the dust. “Sodium, magnesium, chlorine, calcium and sulfur, for the most part. Aluminum, iron, silicon, titanium—typical elements found in soil.” And what about the heavy metals? “Arsenic and lithium.” Perry’s study essentially ruled out any significant immediate problems with heavy metals.

I asked Dr. Perry about mercury, because a lot of people have asked me if there is a lot of mercury in the dust. He explained that mercury is more of a problem in water, and not necessarily the atmosphere. “Particulate mercury is never really abundant in the atmosphere, more like parts per quadrillion.”

Where is the dust coming from?

Perry identified three major sources of dust out on the lake. The largest source is Farmington Bay. It’s also the source closest to the largest population centers. Bear River Bay is another significant source, as well as the area in the northwest corner of the lake. Nine percent of the exposed lakebed produces dust plumes under certain conditions. This is a significant number, in that 91% of the exposed lakebed has a “crust” or vegetation that keeps the dust down during wind events. The part that produces dust plumes has no crust, or the crust is disintegrating and disturbed enough that when the wind blows, it can actually lift it up into the air.

What do we do?

It is so important to keep the water rising in the Great Salt Lake, rather than continue to let it drop. Increasing the lake level will reduce the plumes, and this is the good news.

Farmington Bay has the most potential for improving conditions and reducing dust. If the lake came up just about five feet in the Farmington Bay area, 50% of the dust hot spots in that zone would be covered. Roughly a seven-foot increase would cover up about 80% of the dust spots.

The great winter we had this year is expected to bring the lake up about three feet. Unfortunately, that isn’t quite good enough to make a difference for dust production. But, Dr. Perry says, “Two or three  years like this one and we’re looking good; well, better.”

Diversions will make all of the difference. “We are already diverting more water than what the lake can sustainably handle being removed,” Dr. Perry said. “They pull out the same amount of water, regardless of what type of winter we have had. So during a drought, the same amount is being diverted, even though there is, in some cases, much less going in.”

Diverting more water would be even worse for the lakebed. To maintain long-term health of the lake we need to decrease our consumption by about 29% or we will continue down the 150-year trend of decreasing the lake level by half a foot each year.

I asked Dr. Perry what was the most concerning thing for air quality that he learned from his study. “It’s the fragile nature of the crust that’s out on the lake. Nine percent of the lakebed is blowing, and if that crust is disturbed, that will increase to 22%. It’s so important to protect that crust.” And what’s the most problematic activity? ATV use. “ATV use is just not compatible, it is really a problem.”

Dr. Perry continued with a positive lesson learned. The Farmington Bay dust problem can be mitigated. “It doesn’t take a lot of [lake level] elevation increase to cover up the worst dust source out there. It is a problem that we can really deal with. Mother nature can help us out, but we can certainly tackle the problem with diversions. But the further it decreases, the harder it will be, because it will require even more water.

“Bear River Bay isn’t as easy. To mitigate Bear River Bay dust, you really don’t start to see improvements until the lake comes up about seven feet. And a seven-foot increase at Farmington Bay, rather, has an 80% reduction in dust.”

At least Dr. Perry’s study shows us that the largest source of dust coming from the Great Salt Lake can be mitigated.

This legislative session, a resolution sponsored by Representative Timothy Hawkes brought attention to the issue of addressing the declining lake level. House Concurrent Resolution 10 recognized the importance of continued water flows to the Great Salt Lake and its wetlands, and the need to take a hard look now at solutions to address declining water levels, while appropriately balancing the current and growing need for the water being diverted.

It is imperative that the state gets a handle on how to maintain and protect flows into the lake before we hit a point of no return, like the situation with Southern California’s Owens Lake: The water was diverted for use in nearby Los Angeles, and the resulting dry lake is the world’s largest source of dust. Severe dust storms at Owens made even the nearby highway impassable.

We don’t want to be faced with a situation where millions, and even billions of dollars are spent trying to mitigate dust that simply doesn’t work.

Ashley Miller, J.D., is the policy director for Breathe Utah. She is the vice-chair of Utah’s Air Quality Policy Advisory Board and on the Salt Lake County Health Department Environmental Quality Advisory Commission.