I saw MC YOGI’s face and book everywhere leading up to the event. Spiritual Graffiti? I would think, who is this whack? And his wife? What person calls themselves 10,000 Buddhas? I was highly skeptical. There are all kinds of yogis on tour these days, and while I love experiencing new teachers, sometimes you just have to show up to find out why so many people would pay $75 for a yoga class and a talk by this guy and his wife. So, I went to 21st Yoga with my notebook, camera, and my doubts (as we probably should carry with any kind of self-proclaimed spiritual teacher). Two hours later, I can say I left the event without my doubts, and had made up my mind that these two had something important to share.

We started practice in savasana, not only to relax into the earth but also to feel the full presence of our bodies in the room. MC YOGI turned one of his playlists on spotify. It includes his own music, with the likes of Trevor Hall, Thievery Corporation and Bonobo. We slowly moved into cat/cow and began a gradual, easy vinyasa flow. I was surprised that he didn’t do much introduction on himself. He didn’t share much about himself at all. It was clear that he was here to teach yoga, and that his stories could come at a later time.

This was the first yoga class I’ve ever been in where I’m asked to clap and snap to the beat. Standing in warrior one, we wave our hands from side to side and tap our toes, seriously advancing the workout. He cracked a lot of jokes as most yoga teachers tend to do these days. I always appreciate when a teacher can sincerely make me laugh and let got of that seriousness that can come with asana practice. It also wasn’t a typical Ashtanga Sun A flow, it was unique in that it included Pranayama (breathing exercises) and ancient exercises that help bring the right and left brain together to work as one.

Something he said that really stuck with me were his instructions to “Steam clean your body through your breathing.” I felt my ujjayi breath cleansing every cell and vertebrae in my body, because the practice was focused on more than just the vinyasa flow, but on all the other aspects of yoga that don’t only include the body. MC Yogi would ask, “What does it feel like to have both the right and left side of the brain working as one?” or “What does it feel like to be happy and content in this very moment?” 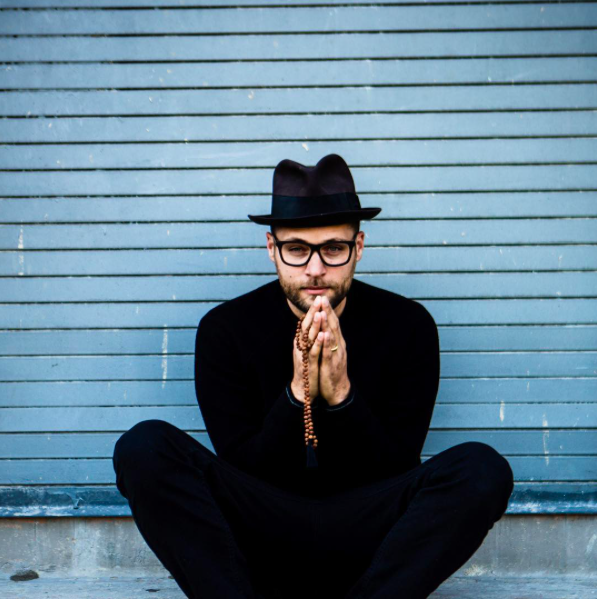 He checked in with us multiple times to instill a sense of mindfulness and contentment in our practice. It felt less about being able to masterfully hold a pose, it was more of an exploration of awareness, of body mind and spirit. He helped me to really focus on what is feels like to practice, how my emotions move with my body and how I can find a peaceful clarity through asana practice. There is so much to be said about taking opportunities to learn from traveling yogis. Experiencing new language around yoga, fresh ways to practice and most importantly, a reminder that yoga is for everybody.

“While I’ve been a practitioner of yoga for years now, I’ve become really inspired by this unique intersection of yoga, music, art and activism. I feel that MC Yogi really embodies what that has the potential to look like.”

After a long meditation, we met again in savasana and MC Yogi read for a us a chapter from his book. He shared with us that he lived in a group home in high school, and that it was the most stable home-like place he had found yet. It was only when there was a mass-expulsion due to drug trafficking and testing, that he learned what it meant to go and make something happen for himself. He was expelled for not passing the drug test and heartbroken that he no longer could live in the home that had brought him so much stability and warmth. So, for the first time, he sincerely began to pray. He remembered his mother’s words, “God helps those who help themselves,” and he took action, he called and wrote to every person at the group home until they agreed to take him back. This is where MC Yogi’s world views began to seriously change because not long after, he tried yoga for the first time.

Before the yoga practice even started, we gathered close and listened to a story from 10,000 Buddhas about her art. Known for her massive murals of multiple buddhas in one piece, she made a goal to paint ten-thousand Buddhas and eventually acquired the nickname to match her goals. She is not self-named 10,000 Buddhas, but she shared that people started identifying her with her work, giving her that name. So she went with it. Inspired by the Ajanta Caves of India, where hundreds of buddhas were carved into the cave walls, she began painting buddhas with those images in mind. After setting her goal to paint 10,000 buddhas, she needed to look for ways to produce more buddhas faster, in hopes of seeing her goal finished in her lifetime. Her husband, MC Yogi, who happened to have a history in street art, taught her some graffiti techniques that helped her eventually reach her goal of painting 10,000 Buddhas by using tools like stencils, spray paint and screen printing. Today she says she is at around 11,800 Buddhas. 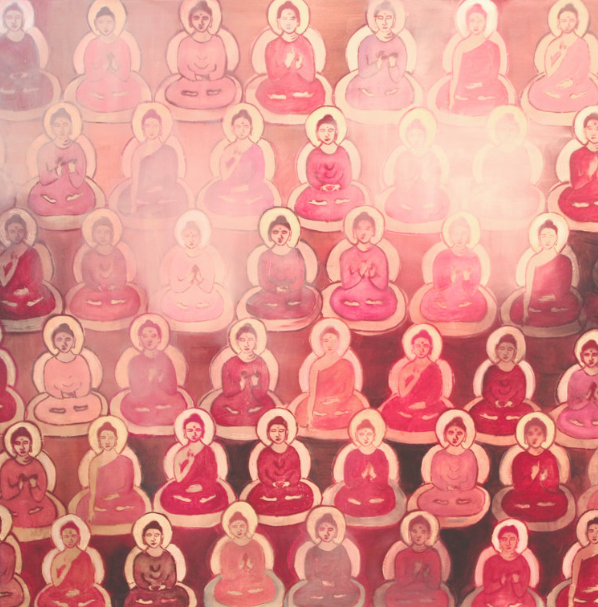 She shared with us that her first painting of multiple buddhas took her an entire year to finish. That piece made more of an impact on her than anything else she had ever painted. She talked about how while painting these buddhas, she would find herself in a one-pointed meditation- a common form of buddhist meditation where you rest your mind on an object like a burning candle until you are in a state of calm peacefulness. “These pieces take consistent effort over a period of time, just like the yoga practice,” she says to the class, comparing the importance of consistent asana practice to her buddha paintings, reminding us that you’ve got to practice your asanas every few days consistently to reap the life-changing benefits of yoga. 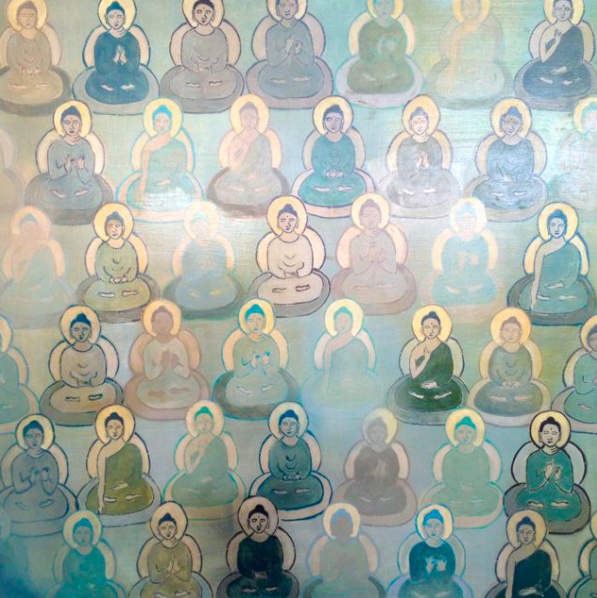 There’s something else very interesting about these paintings- it seems that they protect places from natural disasters. The California wildfires recently spared a home where one of 10,000 Buddhas’ paintings was on display. The flames came right up to the property line, and miraculously stopped. What’s more, a giant Redwood nearly fell on a house, but instead landed in a ten degree span between the home and a big wooden wall that was specifically built to display her Buddhas.  The homeowner insisted that the presence of the Buddhas kept the 60,000 pound tree from falling on his home. More good news- Amanda is scheduled to paint one of her murals in Salt Lake City some day in the future. — I’ve asked 21st yoga for more details on the mural project.

I ended the night feeling blissed out and inspired by MC YOGI and Amanda (10,000 Buddhas). They are a powerhouse of spiritual creativity and light, a pair of cultural creatives on a mission to empower others to also find their own paths.

To learn more about Amanda Giocomini and her 10,000 Buddhas, click here.

To see what else is going on at 21st Yoga, click here.

If you liked this story and would like to see more like this, please make a donation to CATALYST Magazine here.

This article was originally published on October 25, 2017.