On May 31, 1999, my loving friend Brian Wright and I did something completely unconventional. We married each other. Brian was one of the most extraordinary, funny, loving, talented, literate, athletic, musically inclined, intelligent, strong, sensitive, communicative, sarcastic, live-in-the-moment and wise human beings that has walked upon this planet. Brian was also a super gay man.

I am a super straight woman, though I do love breasts. Brian, who had been HIV-positive since 1986, was also in year four of what would be his eight-year-long battle with full-blown AIDS.

It all started in 1998. I had entered a brief moment of darkness. I called Brian and bitched and moaned. He, of course, consoled me, made me laugh, saw me through it. After the conversation, I said to myself, “Self, Brian faces so much more than you and yet he is there at every second to help you see the light.” Brian possessed more altruistic qualities in his wee finger than I did in my entire body.

So, I penned him a love letter. I told him all these things and asked him to marry me. He, in Brian-like fashion, penned a long love letter back and said, “Of course I will marry you sweetie. You possess many qualities that I don’t have and I want to marry them into me.”

That year, I moved into a new home, my wee Magic Cottage in downtown Salt Lake. Lost, scared, wondering what had become of my life and feeling a tiny bit desperate, I invited Brian to stay. Two weeks turned into eight. 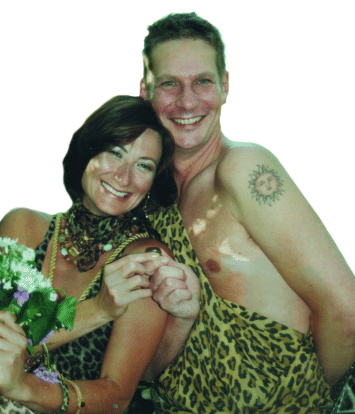 On Christmas Eve, Brian and I walked down to the neighborhood church, light snow falling, midnight mass choir singing Christmas hymns. He got on one knee, in his fur-lined hat and massive fur gloves, and asked me to marry him. Of course, I said yes.

As the weather warmed, plans for our wedding came together quickly. It was easy to know whom to invite and we knew we wanted to wear leopard print. I already had the dress and a leopard print sheet to make him a wedding toga. Plus, who doesn’t look good in leopard print and faux fur!

The night before the wedding, we spent hours writing on fluorescent note paper words that exemplified a lasting relationship: laughter, communication, freedom, joy, growth, love, heart, understanding, spirit, compassion. We hung these words from every tree in the garden. Except for one. On that tree, for balance, we hung words that described all that could possibly go wrong: deception, cowardice, lies, trapped, hidden agenda, cheating, miscommunication, sorrow, bitterness. We called it the “Tree of Ill Regret.”

On the morning of May 30, we wrote down the qualities and characteristics that we found so uplifting, inspiring, endearing and amazing in each other. Then we donned our leopard print and had ourselves a wedding. The guests arrived in leopard print or fur creations. My mom and my niece and two nephews were there. Lily Puss the cat, the neighbors, and old friends attended. High Priestess of Honor was Eddie Gor­nik, fully gorgeous in leopard print drag.

By the waterfall in back of the garden, we read the list of characteristics we wanted to marry into ourselves. I married into me such characteristics that Brain so easily displayed—his humor, his sense of being present and patient in the moment, his faith in life opposing his incredible fear of dying. He told me that in his darkest hours at the hospital he cherished marrying into him my laughter and my undying sense of optimism, my unconditional love for him and my conviction to the absurd.

That day changed me. It changed him, too. Something about the declaration. The proclamation. The written word. The affirmation. The witnesses. The “I do’s.” The cake! I felt —I was—different after that day. I felt Brian within me. And he felt me in him.

A few weeks later, he was in Seattle for yet another round of tests and treatments. Over the phone, we discussed how much “more” we felt. From that point forward, whenever we saw each other we would very loudly say, “Wife! [Husband]! What are you doing?” It was so silly. Yet so fantastic. I know I married for all the “Wright” reasons. Though Brian passed away in 2003, I still feel him within me all the time.

Brian’s star cast a broad light. He had choreographed for many famous figure skaters including Kristi Yamaguchi and Michelle Kwan. He danced on Broadway. He was an outspoken advocate for safe sex. His obituary appeared in the sports section of the New York Times. At Brian’s wake, I asked those gathered if they, too, would like to marry the characteristics of Brian into themselves as I had done. I read my original vows and asked them, “Do you take these glorious characteristics of Brian and hold them in your heart for the rest of your life?” They all said, “I do.”

Sixteen years ago, I engaged in one of the sanest, most meaningful, inspiring and loving unions that I have ever known. And thus, I say a toast in honor and remembrance to my amazing, fantastic friend Brian Wright, who changed the spiritual chemistry of who I am today. Who helped me to see the light and beauty in life, even in the darkest hours, who made me laugh so hard, mostly at myself, that I knew all would be well. I toast to this courageous husband who, without question, having tangoed with death, thus danced so profoundly with life.

This article was originally published on April 30, 2015.