Early Wednesday morning, the post office calls to tell me that our box of goslings and ducklings chicks has arrived, but I don’t know this at the time because that information is contained in a voicemail because I didn’t answer my phone while I was out walking Ben to work.

When I get home, I don’t check my phone, but instead grab a raincoat and leave the house once again to share a rhubarb custard pie with my sister and father. By 10 o’clock, I’m back at home and finally check my cell phone—two messages. I listen to them. The second one is from the woman at the post office. They have a box waiting for me that’s full of some chirping and peeping things. I grab my keys and run out the door.

The post office worker can’t help smiling as he hands the peeping box to me across the counter. A father with his young daughter waiting in line behind me hears the peeping and asks, “Did you have to get a special permit to have birds in the city?” I tell him that the city allows up to 25 backyard birds without any special permits. He seems pleasantly surprised. I am pleased to already be teaching people about raising backyard flocks. 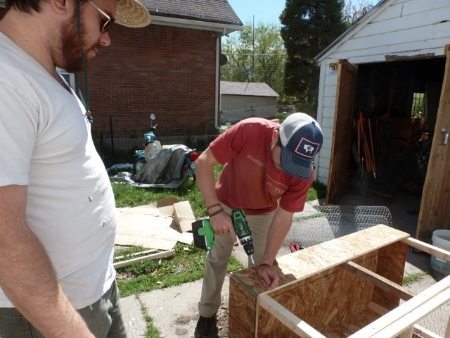 Home again, I look at the brooding box Ben and I built with the help, yet again, of CATALYST managing editor Pax Rasmussen. It’s a simple enough structure, mostly 2x2s, plywood and chicken wire, assembled in short order and at little cost. After we finished building it last weekend, Ben and Pax insisted I test its dimensions and provide them amusement by clambering into the brooder enough for them to close the lid. We’d not touched the brooder box since placing it in a corner of our kitchen three days ago. It still needs bedding, water, food, a heat lamp. While the goslings and ducklings continue their racket from the box I run around preparing their nursery, covering the floor of the brooder with a plush layer of wood shavings, hanging the heat lamp from a corner of the box, and filling a long tin feeder with organic, antibiotic-free chickie mash (Do not feed goslings or ducklings medicated starter food. The medicine, Amprolium, most sources agree, while necessary for raising healthy hen chicks, is toxic to ducks and geese. I triple checked the ingredients label on our bag of Nature’s Best Organic broiler chick feed, recommended by the helpful man at IFA, to make sure that Amprolium didn’t make the ingredients list. It was safe.)

Finally opening the almost one-square-foot cardboard box, I am shocked by how tightly the birds are packed, and how big the geese are already. We were told they hatched just two days ago, but they’re already larger than a man’s fist. The American Buff goslings are pale yellow, with peach-colored beaks. The little Cayuga ducklings look like fuzzy little soft balls of soot—even their feet are black. Bands are wrapped around one leg on each of the birds to help us determine their sex. (When ordering ducks and geese from eFowl.com, one has no choice but to order gendered pairs or a straight run, unsexed.) Then, I notice that one of the goslings lying down at the bottom under the webbed feet of all the others. It isn’t stumbling around, trying to climb out of the box like all the other baby birds. It’s dead, and later I determine that it is one of our females. 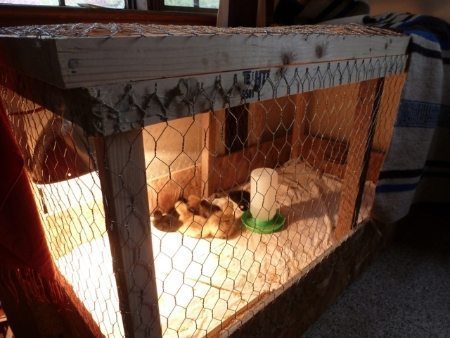 With their brooder all set, I release the birds into the cozy confines of their new home. As they clamber through the feeder and gulp greedily at their water dish, I urgently try to make sure that our existing birds are healthy with the guide of a waterfowl chick instruction pamphlet sent that came packaged with the birds.

Are our birds weak or lethargic, the pamphlet asks. If so, they may need some sugar mixed in with their water. Our little peepers are anything but lethargic. They run back and forth and through each other with the same start-stop-and-go again cadence that Ben claims he had as a hyperactive pipsqueak. They cheep nearly their little-beaked heads off and fall over each other as well as over their over own two webbed feet. They seem to have only the slightest grasp of what it means to be a bipedal animal—they fumble and bob and totter even when they’re standing still. Like drunkards, they nearly trip and more often actually do when they try to break into a run. Ben likes to imagine what it’d look like if you could somehow stick a duckling-sized bottle of booze under their itty little wings, then he kind of repels inside at all the cutsie words he uses when he talks about what he’s taken to call “the little peepers.” Nevertheless, he can’t help but admit it: these little guys are seriously, almost heart-searingly cute.

More pamphlet instructions: “Give them water ASAP. But, take the water away after 15 minutes, replacing it after a 15-minute break. The goslings and ducklings must become acclimated to hydration.”

We’re paraphrasing here: “Resist the almost narcotic urge to constantly touch and hold the little guys: it can be stressful and harmful for them on their first day.”

“If your birds are eating the bedding”—ours started chowing down on wood shavings first thing, ignoring their food trough entirely—”put a stop to it. Put down a layer of cloth or burlap, but not a slick surface like newspaper.” Apparently the shavings can stop up their tiny bowels, and that ain’t good. Even with the tatters of Ben’s ivory white and recently retired Pottery Barn sheets covering the bed of wood shavings, the quackerinis and honkerinis still try their damnedest to eat those wood shavings. I’m learning there’s little reasoning with three-day-old waterfowl.

“Make sure that their food has a high protein content (20%+) for the first three weeks, lowering it to 14-15% for 3-5 weeks and to 11-13% for 5-16 weeks.” Excessively high protein diets can lead to a condition in waterfowl called Angel Wing, which sounds nice, but it retards the development of the wrist joints, creating wings that point laterally out from the body instead of lying flat against it, a grotesque and probably unhealthy development we want to avoid. The condition is only found in fowl fed by humans and one theory attributes it to diets too high in protein and sugars. Because of this, waterfowl, especially as babies, should not be fed bread, popcorn or other human foods, so we’ll never be able to tell whether they like rhubarb custard pie or pasta as much as Ben and I do.

We gotta hand it to eFowl.com. After some haggling on the phone, they stepped up to the plate and agreed to send us a replacement female gosling, and they’re throwing a sex-unknown Cayuga duck in for free. So the seven very alert baby fowl that survived their cross-country journey with the USPS are now lords and ladies of their own expansive (expansive for a creature only three inches tall) boxed kingdom, venturing from one far corner of the box to the other, over where the feeder/playground is. After about an hour or so of running around and preening and cleaning themselves and trying to eat everything within beak’s reach, including a camera lens, they slowly agglomerate, contorting themselves and clambering over each other until they’re cuddled up into a puddle of yellow and black fluff on the outer edge of the heat lamp’s warm radiation, ready for a light nap. That’s how it usually happens, but for the times that the gosling we lovingly call “The Protestor” or “Tim DeChristopher” marches back and forth along the chicken wire looking out into the kitchen peeping incessantly, agitating for who knows what. 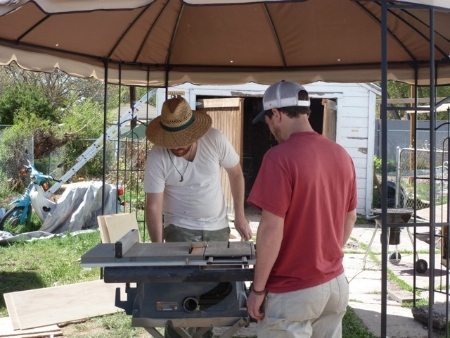 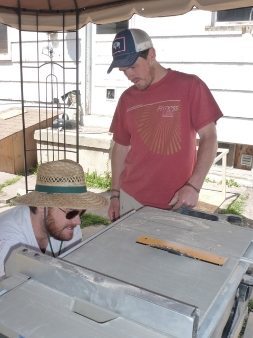 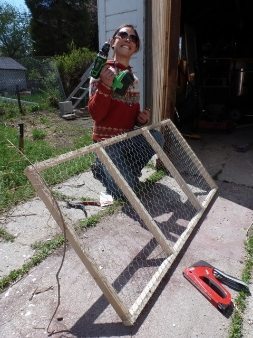 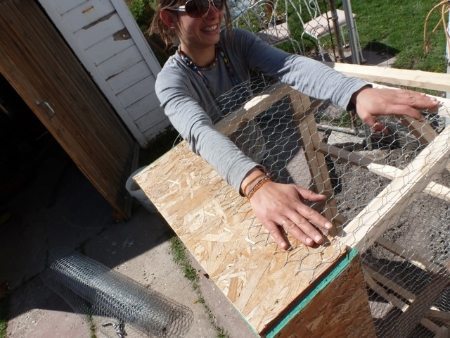 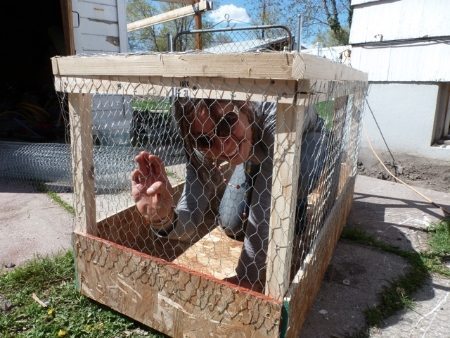 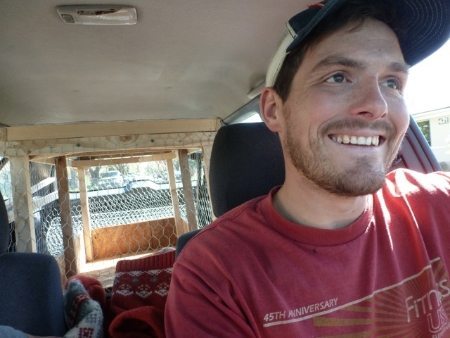 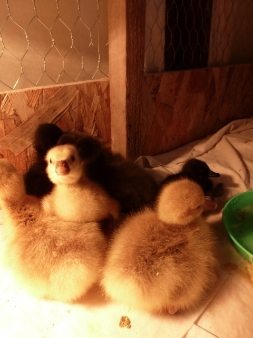 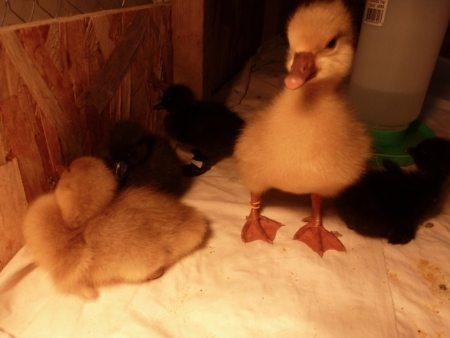 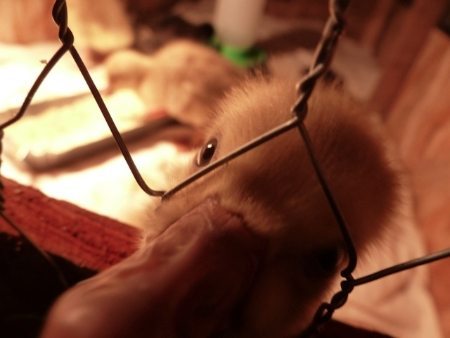 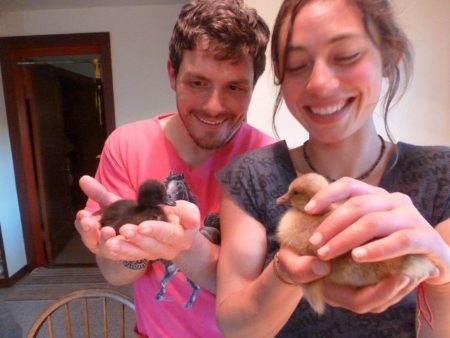 This article was originally published on April 20, 2012.