Unearthing the story of psilocybin.

In July 2006, the journal “Psychopharmacology” published a major research study about the ability of psilocybin—found in hallucinogenic mushrooms—to intensify religious feelings.

A high-power team at Johns Hopkins University compared a group of people taking psilocybin with a similar group taking a placebo, to see if the psilocybin group was more likely to have a mystical or religious experience.

This reminds me of a social science professor who was awarded $300,000 to find out why men visited prostitutes. His earthshaking discovery? That the men wanted to have sex. An even sillier study took place right here in Salt Lake City a few years ago when the City Council hired a Vancouver consulting firm to study how to get people to hang out downtown. Their recommendation: Get rid of the liquor laws. Duh! We paid a quarter mil to find this out? Anyone at a pub would have given the same answer, for free 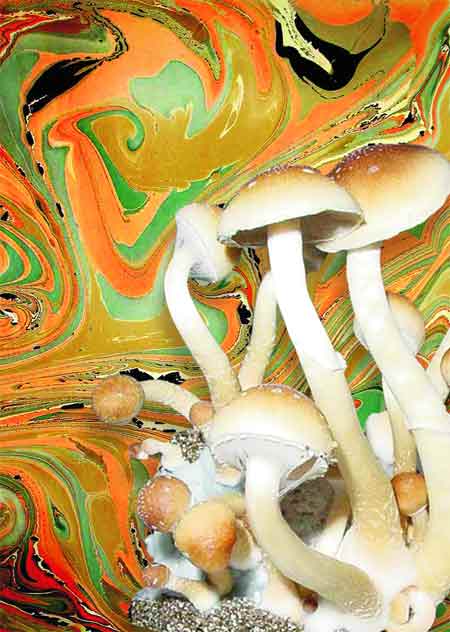 Nonetheless, the psilocybin study was reported in just about every newspaper and online news. Even the Wall Street Journal had a front-page article about it. What I find truly interesting about this is not the obvious study conclusion, but that the study took place at all. Psilocybin is illegal under the Controlled Substances Act. It is listed in Schedule I, a category of substances that have high abuse potential and no medical use. Medical doctors may administer cocaine or morphine, but they are not permitted to possess or prescribe Schedule I substances, and it is almost impossible to get permission to conduct research on them. Other Schedule I drugs include LSD, marijuana, MDMA (Ecstasy), and a whole stash of drugs popular in the 1960s. Research on all of these is forbidden

Although over 5,000 research articles on LSD were published before 1966—many of them reporting evidence that LSD can provide relief from severe pain—not a single study has been done since. Likewise, permission to do research on a possible medical benefit of marijuana, no matter how carefully done, is routinely denied. (Toxicity studies are sometimes approved, however.) So why was the psilocybin study given the green light? And what does this mean?

For the answer, we need to go back about 50 years. It all began with a young woman from Russia, Valentina Pavlovna Guercken. Valentina knew she was fortunate to marry wealthy New York banker Richard Gordon Wasson. She had no idea, however, that this marriage would have a gigantic influence on American history, right up to the present.

One thing a perceptive traveler to Russia will discover is that Russians are absolutely crazy about mushrooms. An uneducated Boris 6-pack can identify dozens of different species, what each tastes like, how to cook it, and its preferred vodka accompaniment. I speak Russian and once spent a week with a family in a wilderness cabin somewhere north of St. Petersburg. Naturally, they were all obsessed with the griby, as they fondly call mushrooms. Every morning, each of them disappeared into the spruce forest, always to return with a weird assortment of fungi. After sorting and comparing and arguing, the whole lot was fried in butter and eaten for breakfast. For a doctor whose specialty includes toxicology, that required trust.

Back to the happy couple. Richard— not your stereotypical banker—took Valentina camping on their honeymoon. He was soon astounded by her knowledge of mushrooms, and her infatuation with them. And then he too got the bug. He became an obsessive amateur mycologist, eventually doing groundbreaking research and making major discoveries. With his almost limitless money and his wife’s encyclopedic knowledge, the couple traveled the world seeking out exotic species. On a trip to Mexico, he was determined to chase down a mystical mushroom described in Mazatec legends and the journals of the Spanish conquistadors. After exhausting ordeals, he finally met the equally legendary curandera who was reputed to be the last remaining person who knew about the mushroom. He begged her to tell him about it. In short order, she helped him find some, he ate it, had a profound mystical experience, and then presented his discovery at Harvard University.

The press went wild about it. LIFE magazine did a cover story on his find, with the catchy title: “Magic Mushrooms.” This heavily publicized event happened to coincide with the beginning of the hippie movement. Mushrooms are the stock of countless fairy tales and “Alice in Wonderland” —and now the flower children had truly “magic” mushrooms to enter the fantasy!

So began the era of recreational hallucinogens in America. LSD had been discovered in 1943 but was not yet popular or widely available. Peyote and mescaline were known mainly to a few beatnik poets and avant-garde writers and artists. Psilocybin mushrooms, on the other hand, didn’t make you sick and could be found in just about every cow pasture from northern Canada to Mexico. Most importantly, they could easily be grown, therefore cutting out the heavy-duty drug trade. Hallucinogens, whether used for a spiritual quest or just plain fun, went mainstream largely because of the generous supply of psilocybin.

By 1963, young Americans were drifting away from the stodgy churches of their parents to connect directly with God through the sacred mushroom. A renowned philosopher of religion, Huston Smith, wanted to see if the chemical psilocybin by itself, taken as a pill, could produce a genuine religious experience. He joined a few others at Harvard who were interested in the experiment — among them a junior lecturer (not professor) named Timothy Leary. Divinity students who had no previous drug use were recruited as volunteers. Randomly, each was given either psilocybin or nicotinic acid (which makes you feel tingly), in identical pills whose content was known only by those who later analyzed the data. The experiment took place on Good Friday, two days before Easter, in the basement of the Marsh Chapel, where the group could listen to the great evangelical service being held above.

The results of this study immediately became famous, referred to by drug researchers as “The Good Friday Experiment” and by others as “The Miracle of Marsh Chapel.” Smith and Leary both published detailed recollections of the event. Oddly enough, the two narratives are entirely different (with Leary as the “hero” in his account). Both agreed, however, that those who were given the nicotinic acid had a somewhat boring time, while those given psilocybin reported the most profoundly religious experience of their lives. And they continued to say this even when they were interviewed again, 25 years later.

Leary became a huge fan of psilocybin, then LSD, and then just about every drug he could get his hands on, including heroin and cocaine. During the next few years, the U.S. sank deeper into a pointless and devastating war. Racial tension boiled over into riots protesting the disparity in civil rights, Robert Kennedy and Martin Luther King were assassinated, and four students were murdered by the National Guard at Kent State University. Meanwhile, Leary raved about LSD, and broadcasted slogans like “To shoot…a policeman…is a sacred act,” and “Total war is upon us.” The trends of political discontent and drug use became inseparable. They looked one and the same to the government and most of society, and frankly, it terrified them.

{quotes}In 1967, hallucinogenic drugs were made illegal, with harsh sentences specifically for LSD, psilocybin, mescaline and marijuana.{/quotes} Penalties for simple possession were higher than the penalties for rape, child molestation, armed robbery or murder. Further research on hallucinogens was banned, and the government tried in every way to demonize the drugs. Nixon considered LSD a greater threat to America than the Soviet empire. Nancy Reagan claimed that marijuana use was equivalent to murder.

It took the country decades to settle down from the ’60s hysteria. Right up until the 2000 election, every president conducted an increasingly costly and absurd “War on Drugs”—the major result of which was the devastation of South American economies, the rise of drug lords and an enormous proliferation of organized crime. Meanwhile, quietly and discreetly, religious drug use prospered. The Native American Church, which uses peyote as a sacrament, grew quickly to some 300,000 members at the present— almost all of whose tribal ancestry has nothing whatsoever to do with peyote. The peyote cactus grows in northern Mexico and along the Texas border and was historically used in the US only by the Mescalero Apache. It was virtually unheard of in Utah until the last century. Nonetheless, there are now seven branches of the Native American Church in Utah—all claiming sacramental use in their traditional religion. Although peyote is a Schedule I drug, it has the unique exception of being allowed in an “authentic” Indian ceremony.

Ayahuasca is a hallucinogenic tea made from Amazonian vines and leaves. Long used in religious ceremonies and spiritual quests in South America, it has also become popular for this use in the U.S. While trying to stay under the radar of drug enforcement, ayahuasca users have recently tried to get a similar religious exemption as peyote. The issue is now in the Supreme Court. Although the law remains unclear, there is a general feeling that hallucinogens are not as harmful as meth, heroin or cocaine, and that religious use should be permitted. Utahns, in particular, are a bit testy about government interference in religious practice.

Overall, there is a sentiment that well-controlled use of hallucinogens is basically harmless and protected by the First Amendment. It is as if the country has grown up, as indeed it has. The baby boomer rebels of the ’60s are now of retirement age, and hallucinogens no longer seem to be common or much of a threat. As the director of the DEA told me in a meeting at the Washington, DC headquarters, “Hallucinogens are not really our concern … it’s not a problem, and just interferes with our work on narcotics, meth and crack.”

Cultural and archeological investigations have convincingly shown that hallucinogens were used as religious sacraments around the world, going back as far as 10,000 years and perhaps much earlier. Indeed, many scholars believe that the fundamental ideation of religious transcendence is based on experiences of hallucinogenic drugs.

So what are we to make of news headlines that psilocybin can enhance religious feelings? The Johns Hopkins study is essentially a repeat of the Good Friday Experiment, with a similar result. Why repeat this experiment? The authors claim their research was done rigorously. In fact, the control substance used, Ritalin, is more obviously different from psilocybin than nicotinic acid and most of the subjects quickly figured out which drug they got. As for the extensive statistical analysis? It is bogus. (Note to math-phobes, please skip the following: The study used metric techniques such as the t-test and analysis of variance on ordinal data—a big mistake. Then the parameters of such things as spirituality are created by factor analysis, which is the statistical equivalent of spoon bending.) In my opinion, the study is junk. The important thing is that it was approved in the first place.

Another study has been approved to assess a possible benefit of MDMA in posttraumatic stress disorder, and many states allow the medical use of marijuana. This shows a newer, more open and tolerant approach to these drugs. Soon doctors may once again study marijuana and LSD for possible health effects, and perhaps—if we are lucky—governmental common sense will prevail.

This article was originally published on November 10, 2006.