Magic in the Grit

When John Ripley Corkery, aka JR, was a sophomore in college, he got an idea for a little festival in the desert. Eight years later, Desert Rocks has blossomed from 150 original attendees to over 1700 last year, has outgrown its original venue, and has evolved from a simple weekender music fest into a four-day multidisciplinary inspirational extravaganza.

This year sees its migration from Moab to the town of Green River, Utah, and its development, with new partners Ron Johnson and Brandie Hardman, as a focus of new cultural dynamism in the region.

JR put the first Desert Rocks Festival together in 2005. “I was managing a small band called Wise Birds,” he says, “and we got booked at Uncle Uncanny’s Music and Art Festival in Heber City in 2004. We had so much fun, and I realized that we could do this same type of small festival for Wise Birds and help us have a following in the region. I knew some people in Moab from living there for four or five years when I was younger, and they’d just bought a piece of property that they planned to use for jeep rallies. I asked them, and we put it together, and Desert Rocks was born.”

That first year the single stage used by the 12 booked bands was a flatbed trailer with popup tents erected on it for shelter; tickets to the event cost $20. Even though JR was only 22 at the time, he was a natural organizer, and knew he had the moxie to pull off Desert Rocks.

Born and raised in Salt Lake City, he was an ice hockey player as a kid and eventually won a half scholarship from the University of Connec­ticut to play hockey there. “I started to organize hockey camps,” he says. From managing hockey players and negotiating gigs for Wise Birds, making the leap to festival organizer was only a little audacious.

Desert Rocks pushed him to develop himself further as an event and campaign organizer in other areas even while he was still in college. “I was taking a degree in biophysics with a minor in human rights at the time, and the Human Rights program was struggling. I asked my professor if I could do a human rights festival to raise aware­ness, and because I’d already organized Desert Rocks I was sure I could pull it off. The college gave me money to put on this event, and it eventually turned into the Human Rights Tour, which visited 20 different universities over thee years and went to the United Nations for the 60th anniversary of the Universal Declaration of Human Rights. 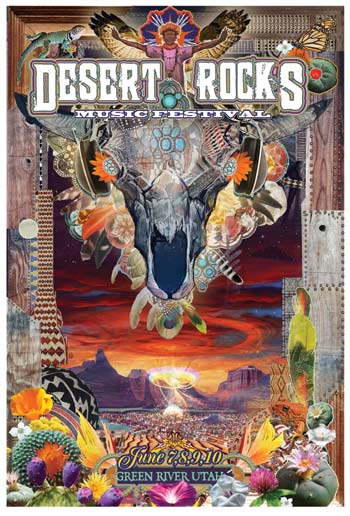 JR continued to produce Desert Rocks in the years after graduation, and the event grew in reach and attendance until, last year, it finally became too large for its venue in the red rock country south of Moab. Clearly if the festival was going to continue, it needed a new home…but where?

Serendipity came calling. JR attended a retreat at the Boulder Mountain Guest Ranch in Boulder, Utah, hosted by ranch owners Ron Johnson and Brandie Hardman, and he was so inspired by the event that he stuck around for 10 days afterward, helping with various projects on the property. JR, Ron, Brandie, and Scotty Whitaker of Solar Saucer and Building Man fame all sat down to talk, and the future of Desert Rocks became clear. It would move to Whitaker’s land in Green River, and Ron and Brandie would join JR as co-producers of the event under their Conscientia production company.

Working with Whitaker and Conscientia meant that Desert Rocks was going to change more than just its venue. Brandie Hardman has a 20-year history of event production and had been organizing progressive and visionary events under the Conscientia banner for several years, and she and Ron wanted to see that same sensibility incorporated into Desert Rocks. Scotty Whitaker, aka Scotty Soltronic, has been running the eco-conscious Building Man Festival on his land for two years now and also had a vested interest in seeing Desert Rocks evolve to a higher level if he was going to play host. This was all music to JR’s ears. “Desert Rocks has always been a Leave No Trace event, but I was never before able to incorporate my inspiration for what it could be into the grander scheme of it. Ron and Brandie are doing some really amazing things with Conscientia, and it’s a great partnership because it’s allowed me to work on that vision I had. Ron knows so many great presenters and artists, and he has provided us with the contacts and the financial backing to make this a reality.”

Ron is equally enthusiastic. “Any­thing that Brandie and I are involved with really has to hold space for content that creates change individually; within groups that are there, and within the reach that that group has.” Conscientia has arranged retreats featuring visionary artists like Alex Grey and Android Jones, and writers like Graham Hancock and Daniel Pinchbeck. The company is also affiliated with Pinchbeck’s Reality Sand­wich network and the Salt Lake City Evolver Spore, which brings progressive films and presenters to Salt Lake in an effort to inspire cultural transformation. “We said we’d like to see not just the music—rock, live bands, bluegrass, electronica, indigenous music, spiritual music, sound healing and so on—but let’s bring in other content as well. So we have a movie festival actually going on within the Desert Rocks festival, and the Evolver Spore will be showing movies such as Daniel Pinch­beck’s Time For Change and the recent remix of DMT: The Spirit Molecule. That visual remix was done with state-of-the-art graph­ics by a group out of Germany and it’s phenomenal. We will be showing it on a projectable art dome—the dome will house an art gallery inside it, but the movie projected on the skin of the dome will be visible from miles away.”

For her part, Brandie is also happy to be helping Desert Rocks in its becoming. “There’s a shift that’s been happening with these festivals, where people are beginning to want to see a more conscious approach to how they’re produced,” she says. “Ron and I wanted to get involved because we’re interested in helping create a sense of community, not just creating a party where people come to listen to music. This is creating in a really fun way. We were selective about who we signed up for music, and we carried that attention to detail right down to the food that’s being served to attendees. Our vendors are using sustainable practices and serving healthy food, and we’ve signed on independent companies that carry a good message to their patrons. We really want to encourage a healthy lifestyle and healthy living, not booze and fast food! I’ve been to several festivals, and to Burning Man, and there’s this sense of community that people can experience with even thousands of people around, and that’s what we’re trying to achieve from beginning to end. Right at the gate, we’re asking each person to participate in three random acts of kindness. We want to set the tone so that it will be a really amazing experience for everybody. There will be a gifting tent and a hospitality tent, and plenty of shade and a chill lounge as well.”

“Scotty had been coming out to Desert Rocks and bringing more and more production every year,” JR notes, “and so now he’s not going to have to tear down his equipment after Building Man to move it and he and the Cosmonauts can use all of that extra energy to just build and build. I was really excited about this, because he and his crew are such an amazing source when it comes to building metal artworks and big sculptures and structures that are really cool and unique. All that energy is being put toward just developing the venue.”

The festival is also providing a platform for the producers to bring in presenters to address the future of the Green River itself. “I feel like there was some higher purpose for us to move to Green River,” JR continues. “It’s the third most important tributary river on the planet, and as a major part of the Colorado River it did most of the carving out of the Grand Canyon, yet it’s under threat by various interests including a tar sands project and a nuclear power plant.” JR and his co-producers are hoping that when attendees get to experience the beauty of the area and understand the issues at stake, they will also understand what Utah and the whole region will stand to lose. The Water Keepers Alliance will be in attendance, and Rocky Anderson will also be speaking.

Desert Rocks is on target to fulfill its producers’ aspirations of putting on a lush, conscious, and fully catered event in a dry desert. Food vendors include Simply Kurry, McDevitt Taco Supply, Zach’s Poppin Johnny Ice Cream, Java Go Go, Ice-Aholics organic shaved ice, The Pita Break, Sweetwater Grill, Omar’s Raw Foods, Pat’s BBQ, the Sustainable Living Roadshow’s Tea Hut, and Sushi Groove. Attendees will have access to potable water for their camps, can purchase hot showers for $5, and are being actively encouraged to take care of their bodies in the harsh desert environment. As part of the vanguard of new conscious events, Desert Rocks plans to establish itself and its unique Green River venue as an unmissable part of the festival season. There’s a lot more going on in the desert than people think, and music lovers, visionary art aficionados, and people interested in positive social change alike will enjoy the journey to go find out what’s out there. Visit the website for detailed information regarding performers, presenters, participation opporunities and more.

“There’s a lot more going on in the desert than people think.”
—Ron Johnson

If you go (what you should know):

Desert Rocks will feature three stages—two at either end of a horseshoe-shaped “esplanade,” and one in the center. The Planet Stage where acts like Beats Antique will be performing will be rigged for silk and aerial performances, and will face the Cosmic Stage at the other end of the horseshoe. Gates open at the Jenk Star Ranch at noon on Thursday, June 7, and the music starts at 3pm that day. The event runs through dawn on Monday, and the camping area closes and everyone must be moved out by 2pm. The festival runs rain or shine. Tickets are $140 online as CATALYST goes to press, and price tiers will increase as the event approaches. Camping passes range from $15 for a tent through $55 for a large RV, and there are several VIP packages available. Dogs are welcome for a $40 fee online or $50 at the gate, and shuttle buses will be available between the Jenk Star and Green River for those staying at hotels in town. People camping at the event should be prepared to follow sensible desert camping guidelines, and everyone should be prepared to follow the rules of the festival. Treat people and your environment with respect. Look out for your fellow music-loving campers. No mean people. Further information including performance lineup and movie festival details available at www.desertrocks.org.