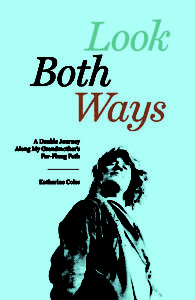 A daring life. What may come of the diaries in the attic?

Katharine Coles, University of Utah English professor and Utah’s former poet laureate, has been delving into family history with a nonfiction biography/ memoir, Look Both Ways, about her grandmother, Miriam Wollaeger Link. In Chapter 2 we find Coles’ mother Joan helping an elderly Miriam clear out a lifetime of accumulation from her house. Joan is ruthless. Miriam was an inveterate writer who saved everything, but her journals, poems, letters and photos have all gone into the trash. The next morning Miriam rescues her life history and hands it over to her poet-granddaughter.

Sixty years earlier Miriam had written, There is always a chance that a diary might fall into hostile hands, before one’s death. Might not children or family be disillusioned if they read some of its pages? But now she feels a bond with the granddaughter who has inherited her own intense gaze and a small enough frame to wear her wedding dress. She gives Katharine permission to take the papers but cautions her own daughter Joan, “I fell in love a few times, you know?”

Miriam lived an adventurous life, but one restricted by gender roles. Unusual for a woman of her time, she earned a degree in geology. When she was just 20 years old she married a fellow geologist, Walter Link (nicknamed Brutus). In the days before air travel and tourist infrastructure, they traveled the world by ship. Miriam lived abroad—in Columbia, Sumatra, Java, Costa Rica and Cuba, but she never worked as a geologist.

While Brutus was in the field searching for oil, Miriam inhabited a world of colonialist white privilege. Native housekeepers handled the chores while she wrapped herself in silk shawls and Chanel No. 5 and swirled through an expat life of dance floors, card tables, golf courses, yacht clubs, polo fields and flirtation, a whirl of old-fashioned gaiety with a dark side of loneliness. She writes giddy letters home to Mom about her latest love affairs. O Mommy, I do have fun living— and I’m riding high again now — pray a bit for me, no? Something is almost sure to spoil it.

The limitations on women of Miriam’s time seem intolerable to Coles. She finds Miriam frustratingly passive. Throughout the book, Coles never does forgive Brutus for his male privilege and the Indiana Jones-style adventures his sex afforded him.

Yet she writes that her grandmother’s voice is like a glove on her own hand. She tries on Miriam’s clothes and jewelry, and embarks on a journey in Miriam’s footsteps, following clues in the letters and diaries to locate the houses where Miriam lived and the hotels where she vacationed. Much of the past has decayed into post-colonial ruin, the glamour long gone, the surrounding environment decimated by the resource curse. Coles can’t speak the local languages as Miriam could. She feels conspicuous and vulnerable traveling alone.

Coles is a dazzling writer who weaves the threads of her own story and Miriam’s together so that they unfold simultaneously in the past and present. The two voices, Miriam heedless and charming, Katharine solitary and stubborn, become a meditation on the kinds of hard choices and lost opportunities that come with even the most elegant-looking female life.

Amy Brunvand is a University of Utah librarian and an award-winning poet.