The writer Craig Childs has been traversing the American Southwest since childhood, always drawn off trail to the ledges, rivers and expanses where others did not travel, a vagabond in the wilderness. His writing is always deeply personal. It also touches upon themes and subjects important to those of us in Utah—of water, wildlife, first peoples, wilderness and desert, especially the desert of the greater Canyonlands area, one of Childs’ most sacred places.

Childs has published 12 books. He is contributing editor at Adventure Journal Quarterly and his writing has appeared in the New York Times, Los Angeles Times, Men’s Journal, High Country News and Outside. He teaches writing at the University of Alaska and at Southern New Hampshire University. 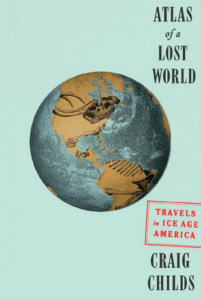 His new book, Atlas of a Lost World: Travels in Ice Age America (2018), tracks the path of America’s first people, thousands of miles from Alaska to Florida, as they entered the American continent during the last Ice Age. An exploration of early human history and Ice Age landscape tied together through the writer’s own first person story, the book is, for Childs, an attempt to reintroduce readers to the intimate connection that humans once had to the natural world, a connection he fears we are at risk of losing completely.

Excerpt from Atlas of a Lost World:

Day five, we were running low on food. The moms were the first to notice. Dads did the food-buy in Anchorage, and we’d gone light on snacks, which cut into the staple supplies. We were eating rehydrated hummus and cheese too fast. If we were real Alaskans, we’d be eating salmon, but we didn’t know these waters. We dropped a crab pot, checking it a few times a day, mostly catching starfish. Over the next few days, we had to ration and dig deeper into wild foods. Steamed clams for breakfast, lingcod caught on a line and sizzled in a pan for dinner. We had a biologist on the trip, Irvin Fernandez, who specialized in eating from the land in unfamiliar places—spiders in Cameroon, and tree-beetle grubs in Central America. He was just the man a tribe like ours needed.

I’d traveled with Irvin for decades, eating bugs and seeds in the desert with him. We killed a jackrabbit in Arizona with a slingshot, gutted, skinned, cooked it on a palo verde fire. Traveling the Mexican coast of Sonora by food, we ate almost every living thing we could find along those parched desert beaches, emptying slugs and silver-dollar crabs onto a tarp to decide what was viable and what wasn’t. Irvin had an admirable way of experimenting with his mouth, taking in unfamiliar foods, usually faunal, and chewing them to pieces with a quizzical expression on his face, asking questions of every taste and texture. He believes it is a coastal way of eating, something that comes naturally to families of the Pacific Rim. It is also something you learn while foraging in unfamiliar foodscapes. What he didn’t want he spat out: shells, bones, exoskeletons, acidic excretory sacs, the head-caps of grubs.

The kids watched, captivated. It was like science class, studying antenna sprouts and knobby eyeballs of prawns we caught in the pot as Irvin showed them how to eat heads whole. He said yes to one thing, no to another. Yes to the many mollusks we dug up in our low-tide clamming industry. No to a twisting, two-foot-long annelid worm that a farm kid from western Colorado wanted to put down his sister’s shirt.

The younger kids, including Irvin’s four-year-old son, proffered seaweed to the group, collecting different species based on the biologist’s instructions. They toasted Palmaria hecatensis, a red-ribbon seaweed, with olive oil and salt. They called it sea bacon to entice us. We ate until we couldn’t take anymore.

I believe that’s why coastal travel would have always been preferable to the interior: free food. Use of marine resources was common in the Ice Age. Isotopic measurements of bone collagen from 12,000-year-old human remains in a cave in North Wales, United Kingdom, indicate that 30% of their dietary protein came from marine sources. Technically, Ice Age people weren’t hunters or gatherers. They were like us in our kayaks: foragers, searching widely for food and provisions. In the interior it was eat or be eaten, while here there was food in the water and on land. It was hard to go hungry. You could dig in the wet tidal zone for mollusks, gather seaweed, fish, prawns, berries, deer, moose. At Ice Age coastal sites in California, Peru, and Chile, people ate mastodon, salmon, seaweed, deer, and sea lion. They weren’t maritime specialists, unlike most coastal dwellers from the last several thousand years. They inhaled the coast as they went, whatever land or sea offered. Every degree down the face of the globe brought something new.

Children, we discovered, were a great bear deterrent. Adults scouting other islands found fresh bear sign all over the place, tracks and scat everywhere. With kids, however, our camp felt off-limits, the closest fresh bear scat about a half a mile inland. Once we took over a cove with tarps and squealing, running little monsters, the bears cleared out. I pictured them huddled at the opposite end of the island, waiting for all the yelling and stomping to cease.

I studied each of our children, wondering who they’d be in a tribe on the far side of the world. Any tribe would need hunters and healers, people who knew the plants, what was edible and what wasn’t, the bark of mountain alder good for arthritis, and willow for head­aches. How to eat, and how not to get eaten. Someone would have to have an eye for sickly mammoths in the hunt, another would need to be good at starting fire with a hand drill, catching kindling under a crisscross of greasy megafauna bones on a wild Pleistocene coast.

What would my own boys have done in this ancient tribe? They stuck their noses into bear prints, at leaves, and held up driftwood, aligning themselves with horizons. In a half-hearted rain, my younger boy, Jado, was down by the water talking to animals. Six years ago, he stood at the edge of the tide in black rubber boots, holding a barnacle-encrusted rock. He cupped it near his mouth in both hands and hummed to it.

I approached the boy like a modern father; I flipped on my camera and asked what he was doing.

Jado looked up, distracted, dots of mist caught in his eyelashes. Glancing at the camera, he said, “I’m humming to make them come out.”

“To make what come out?”

He tipped the rock toward me, showing a couple small, black periwinkles.

“So you hum, and the snails come out of their shells?”

“Yeah, but it takes an hour to get them to come out.”

He turned and scurried away.

He Who Talks to Snails. You would have needed one of these in the Ice Age at the edge of the known world. The spirit of an animal can kill you. It is not human. It is not concerned with our enterprises, so we must be concerned with its. When you are pure in wild places, you understand what is not just us,  what is beyond our self-admiring sphere. The   first people would have hedged every bet. Somebody needed to talk to the animals, calling them in for the hunt, fending off the most fearsome and dangerous with a prayer, an offering, a word of thanks to land and sea. Whatever it took. Shamans were needed.

The earliest known shaman comes from 12,000 years ago, well within the brackets of the Ice Age. The remains are from a late-Pleistocene excavation in the Galilee region of Israel. A roughly 45-year-old female was buried with 50 complete tortoise shells, the legs of a wild boar, an eagle wing, cow tail, a leopard, two marten skulls, a complete horn core from a male gazelle, and a single human foot. The unusual accompaniment of parts suggests to researchers that she held a position of spiritual import between worlds.

In North America, the oldest suggestion of shamanism—not counting the simple presence of ochre—comes from the last few thousand years: ritualized twig figurines of animals in the caves of the Grand Canyon, or wildly pecked and painted canyon walls in Utah and California, people turning into birds and animals, liminal creatures between one world and the next. You see faces coming out of the caves of Jamaica, their rounded features like ghosts not quite in the light, but not in darkness, as if peeking out at the created world.

Shamans are the ones who went into the shadows and did whatever could be done to ensure the survival of the people. You would have needed them to get you through

This essay is an excerpt from Atlas of a Lost World: Travels in Ice Age America, reprinted with permission courtesy of the author, Craig Childs, and by arrangement with Pantheon Books, an imprint of The Knopf Doubleday Publishing Group, a division of Penguin Random House LLC. Craig Childs will share his work at this year’s Utah Humanities Book Festival (along with Nevada poet Gailmarie Pahmeier) on Tuesday, October 6, 7pm, at the Escalante High School in Escalante, Utah.

This article was originally published on September 30, 2018.