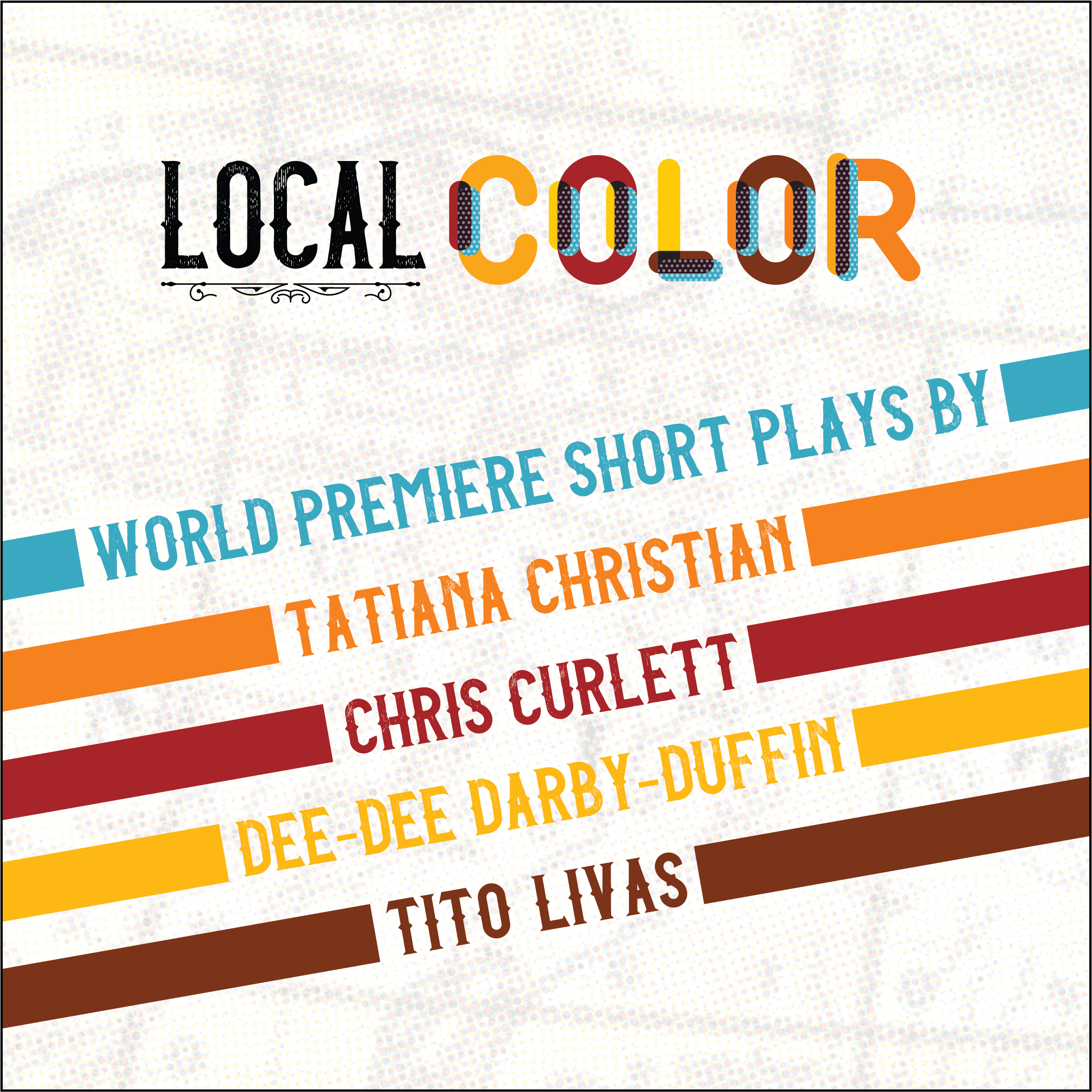 LOCAL COLOR is comprised of four short plays by members of Plan-B’s Theatre Artists of Color Writing Workshop: DoLs by Dee-Dee Darby-Duffin (a comedy about becoming friends in the most awkward situation imaginable); GUISE by Chris Curlett (a dramedy about [re]defining masculinity); ORGANIC by Tito Livas (a dark comedy about love, perception and Grindr); and SUCIDE BOX by Tatiana Christian (an even darker comedy about the deadly side of customer service).

Chris, what inspired you to try your hand at playwriting?

I was inspired to get into playwriting due to being so upset and infuriated with the stories I was only casted to perform centering around Black trauma and pain. That gets old real quick and it was time to wield the pen so I could, eventually, tell stories of Black joy.

Tatiana, what inspired you?

Several years ago, a woman I followed online (an astrologer) talked about a one-woman play she had written; and it just got me thinking if I should give writing plays a shot.

I didn’t grow up a theatre nerd. The first musical I ever saw was “Thoroughly Modern Millie” as a teenager, and nothing clicked. I even went into NYC in college to see “Hairspray” (which I loved) but I just never considered theatre as something I could or should do professionally (or even casually).

It wasn’t until I moved to Salt Lake City, where I began to see plays quasi-regularly, and learned about Plan-B’s workshop for playwrights of color. But it would take maybe another year before I finally asked about being in the workshop.

Chris, how did you determine that “Guise” would be your first play?

I drew from recent experiences, that way I could get something down on paper to show the group. I wanted to do things more cerebral and intricate; however, gotta crawl before you walk or run!

Tatiana, how about you and “Suicide Box?”

I really don’t know. I procrastinated for awhile, although I had been circling the suicide box idea for awhile – I just didn’t know how to write it or what I wanted it to look like. It kind of came together without much planning on my part – which was serendipitous really.

Chris, how is the world of “Guise” informed by your real life?

This play is pulled from my experiences moving from Los Angeles to Utah. I have lived all over the globe and have had tough environments to acclimate to. This was, by far, the most difficult. “Guise” gives you a snapshot into interactions I had moving to Utah and, also, facing masculinity and mental health during a time that so many social, political and economic things were shifting.

Tatiana, how is “Suicide Box” informed by your real life?

Well, the character works in a call center that is directly based on my life and the calls she answers are actual calls I’ve taken – so THAT part is super real. I also wanted to talk about mental illness and suicidal ideation. I can’t really remember my thought process on it now, and COVID has slowly been turning my mind into mush (very little stimuli over the past year + technology fatigue) but I just felt like this wasn’t something I had seen yet.

Working customer service is awful and can lead to mental distress because customers are allowed to abuse you and it can be difficult to deal with angry people for 8 hours a day, 5 days a week, and get paid poverty level wages while doing so.

Chris, how does being a Black artist inform your writing?

Society constantly reminds me and taunts me about my Blackness. So, I do have many play ideas in my mind about these experiences, but I also feel a certain duty and pressure to make sure I tell stories of hope, joy, success, magic, and all the other awesome things that my non-BIPOC peers get to experience. Additionally, I hope to use my social work training/experiences to tell stories that uplift other communities.

Tatiana, how does being a Black artist inform your writing?

I don’t really know if the act of being Black informs anything; it’s living in an anti-Black world that has gradually shaped my perspective. The question of what is Blackness, what does it mean to be Black can only be answered by individual Black people.

The fact that I’m Black is enough, and I don’t think my play (or any kind of creative writing I do) needs to “prove” its Blackness, even to other Black people. We should always be challenging what we think of when we think of Black people, and not allow our imaginations to be siphoned through the white gaze. (Though, there is something really delicious about coming to a Black person’s work, and feeling really attuned to it because it’s so uniquely Black – and I think in that way, art by us and for us is always desirable).

But like I said – living in an anti-Black world means living in a world where people who aren’t Black get to use our bodies for their own messaging or purposes. We don’t exist as real to them, only as caricatures to talk about racism or we are tokenized. It’s really frustrating to come to a play, see a Black actress, and never being sure if the portrayal will be racist, and then not understanding why this non-Black playwright wrote a play starring a Black person.

I just feel like – why can’t we be left alone? Why do so many people want to keep talking about us without us? Why can’t we be prioritized in ways that are actually validating and liberating?

So, I guess that’s the main way being a Black artist informs my work – I want to write plays that have Black people in them. I want to be a Black playwright who writes stories starring Black people.

If Toni Morrison can win a Nobel for writing about the internal lives of Black women; I really don’t see why I shouldn’t do the same.

The audio stream of LOCAL COLOR premieres June 3-13 during Pride Month as part of the National New Play Network’s Bridge Program and the State of Utah’s Thrive 125 Statehood Celebration. Pay What You Can tickets ($0 – ?) are available here.

This article was originally published on May 7, 2021.