I first became aware of these guys in December when Utah’s ban on marriage for same-sex couples was ruled unconstitutional. Kitchen and Sbeity are one of the three couples who filed the lawsuit in March 2013 challenging Utah’s discriminatory marriage laws.

On a Saturday visit to the Down­town Winter Market, my husband and I sought out the Laziz booth. Kitchen and Sbeity’s warm smiles and welcoming demeanor drew us in first, and then they offered a taste of their creamy garbanzo bean dip. We became immediate fans.

Kitchen and Sbeity met five years ago through a social networking site while both were at college in different Utah cities. They began dating and eventually Sbeity moved to Salt Lake where Kitchen lived and they began cooking together. “I guess we bonded over food more than anything,” says Kitchen.

They began making weekly pre-cooked meals for friends to take home and reheat. Soon they were getting requests for the hummus they occasionally included in the meals. Even random strangers got hooked on the delicious spread, adapted from an old Sbeity family recipe. “We figured we were on to something,” says Kitchen. 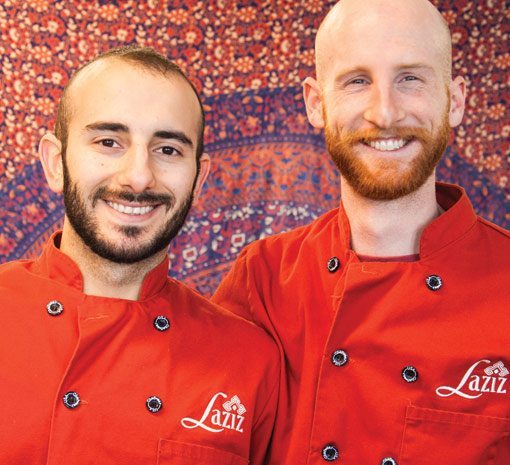 They applied to the Downtown Farmers Market in 2012 and were accepted on a part-time basis. Soon they started seeing encouraging enthusiasm for their product. Kitchen says it’s the creaminess of Laziz hummus that sets it apart. Pressure-cooking the dried garbanzo beans (aka chickpeas) and removing the skins is the secret, I’m told.

With such a positive reception, Kitchen and Sbeity added two more products to the Laziz line: muhammara, a delicious blend of roasted red peppers, pomegranate molasses and walnuts; and toum, a strong garlic spread, with olive oil and fresh squeezed lemon juice.

A main tenet of their business is a commitment to healthy food systems, says Sbeity. They source locally where they can, but lemons, sesame seeds and garbanzo beans just don’t grow in Utah. They are currently looking for a farmer to grow onions for them. Olive oil and tahini they import from Lebanon, as well as spices.

They tell me that local “is key, but quality is key as well.” They squeeze fresh lemons and use fresh roasted red peppers, which they source from Murray-based Firebird Chile Company.

Laziz is working on getting non-GMO certification for their products, which are already GMO-free. At their solar-powered Artspace kitchen, Sbeity and Kitchen compost their green waste through Momentum Recycling and recycle all their glass and plastic. Their deliveries are made in person, to local stores, in a Prius and they hope to further increase their company’s sustainability as time goes on.

While the two men hold court in the kitchen, Sbeity and Kitchen are also in and out of court. After giving oral arguments at Denver’s 10th circuit court on April 10, they are waiting to hear if their case will make it to the U.S. Supreme Court. “This lawsuit is a passion of ours,” says Kitchen, “but it’s become somewhat of a second job.”

Once Kitchen and Sbeity are able to turn their full attention back to Laziz, they want to resume their popular cooking classes. They also plan on expanding, with new products such as frozen falafel and maybe even opening their own deli.

This summer, Laziz will be a new sponsor of the Downtown Farmers Market where Laziz so recently got its start.

As for wedding plans, Kitchen and Sbeity are waiting for the outcome of their case. When it does happen, you can bet Laziz foods will be served at the reception.

You can find Laziz spreads at the Downtown Farmers Market (opening this month at Pioneer Park) and at various local grocery stores. See their website at www.laziz-foods.com