Life on the Tavaputs Plateau

M y handcuffs tightened with every bump and jolt as the van barreled down the 85-mile road to Vernal, Utah, the heart of oil and gas country. The workers’ cries of alarm still rang in my ears. Like scared insects they’d fled from their bulldozers and belly-graders the moment we swarmed over the tar sands processing facility, clad in chipmunk masks. The sight of a truck spraying ancient aquifer water for dust control had filled me with rage. Adrenaline still flooded my veins. The police had protected the real criminals – the corporations destroying this place, home and hunting ground to indigenous people and animals.

After living in the potential sacrifice zone for a whole season and counting, action had become not a choice but a compulsion. I could not stand by and watch its violent destruction.

Twenty-five people were arrested that day, September 23, 2014, for protesting tar sands mining on Utah’s East Tavaputs Plateau. On January 8, 2015, we accepted plea deals. Many of us risked felony charges. Despite our full knowledge of this risk, we’d continued, sent over the edge by the threat of climate collapse: disaster for the rivers, land and air. Tar sands mining means strip-mining the earth and crushing up asphalt-like rock to get a low-grade fuel out of it, making the land a veritable moonscape. We had to make personal sacrifices for the sake of a livable future.

Many people believe direct action is a choice. The company bulldozers are not coming for their home. But over the course of several seasons I had allowed this place to become my home and I came to realize that it’s only a matter of time before we’re all on the front lines.

For years, Utah Tar Sands Resis­tance, Peaceful Uprising and Canyon Country Rising Tide have been in the forefront of resistance against U.S. Oil Sands’ mine, staging rallies, guerilla theater and creative interruptions of industry conferences. Moab-based Living Rivers challenged U.S. Oil Sands’ permit to dump toxic wastewater. Last June, the Utah Supreme Court denied their appeal on a technicality. We have worked to show agencies with the power to halt the mine – the Utah Department of Environmental Quality (DEQ) and the School and Institutional Trust Lands Adminis­tra­tion (SITLA) – the dangers of tar sands mining. We have watched helplessly as the state built a taxpayer-funded, $3 million-a-mile highway out to the remote mining site. Nothing worked.

We maintained a regular presence with group campouts. And when the company began clear-cutting and grading a 23-acre area for its processing facility, we stepped up as well. Occasional visits weren’tenough. We began arranging for donations, food drop-offs, kitchen supplies, bear-safe food storage. On May 17, we moved in. Our ongoing vigil lasted the next five months.

The East Tavaputs Plateau is a land of paradoxes and compromises. It is a land of lush forests and cow-trampled streams. It’s a land of sparse sagebrush ridges and dense stands of pine. It’s a land where midsummer’s dryness gives way to August’s soul-shaking storms. And it is a land of resilience. An old homestead slowly decays, its timbers becoming nursery logs for new saplings. Nearby, a new cabin is being erected. The skeleton of a calf lies bleaching in the sun. Old tar sands mining equipment rusts slowly away at a site abandoned in the mid-’80s a quarter mile from the new test pit. Already earth is creeping up over its base. Nothing grows on the pulverized hills of the old mine. For the Tavaputs, a place capable of recovering from just about anything, tar sands is a different game. 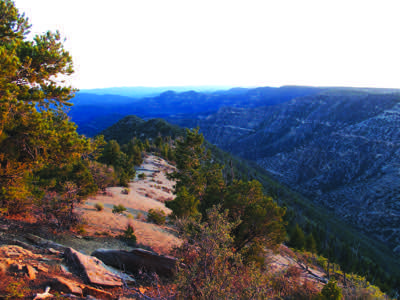 Our first wave of action came on June 16. A group of women marched with calm purpose onto the field and halted machinery by putting their bodies in its way, shutting down work for part of the morning. The second wave came on July 22 when 40 people pounded down the dirt road to the machinery yard in the rising dawn. Folks who’d taken on higher-risk roles hopped the fence and leapt onto the bulldozers and belly graders. In teams of two, they “locked down,” linking their arms together inside lengths of PVC pipe inserted through strategic points in the equipment. Another person U-locked his neck to the front gate. Indigenous people from around the region dropped a banner from atop a machine claiming the site as Ute land. On June 14 the EPA ordered U.S. Oil Sands to undergo additional permitting since the site lies on traditional Uintah and Ouray Ute land. The company has yet to comply.

The startled sheriff finally emerged from his nearby trailer, but he was far too late. Police spent the morning extracting people locked to machinery. By the end of the day, 21 people had been arrested. Work at the site did not resume for an entire week and for long after, smaller actions continued to halt work for hours at a time. Our message to corporate investors was clear: We are not going away.

At night, before bed, I often sat on the cliffs at the end of the earth. I could feel a power radiating here from her, infusing me with a calm strength. She sang all night. Her singing silenced the footsteps of nighttime visitors like the mountain lion mother with cub who traveled by my tent after dark, judging by their tracks. What happens to the soul of a place like this, when strip mining destroys it forever?

The indigenous people in the community of Fort Chipewyan, downstream from the tar sands mines of Athabasca in Alberta, Canada, are warned not to eat the fish from their rivers. They can’t eat the wild game they’ve always relied on. They’re getting rare cancers at alarming rates. If tar sands disaster happens to the East Tavaputs Plateau, it will happen to the rivers and their people, connected to this place by a continuous thread of water.

My challenge, to all those with the privilege to look away, is this: Put yourself in situations where choice becomes irrelevant. Allow yourself to get emotionally connected to the point where you can never turn away. Choice is an illusion.

That day in September, as the van bore us onward, I noticed we were not alone. A flock of turkeys walked alongside the road, pecking at insects. I wondered if these juveniles were the babies I’d been seeing around camp, almost grown up. A herd of elk stood at attention as we passed, herd after herd of wild horses and pronghorns met us as we went by. I’d never, in my years of travel out here, seen so many animals gathering by the road, as if reassuring us that we would return to them soon. I felt gratitude knowing my time away would be short. I was, despite the injustice of it all, in the right place.

The Utah Tar Sands Resistance was organized to stop the first tar sands mining project in the U.S. To learn more: