Life Is But a Dream

All human cultures have in common the urge to seek, understand, and utilize altered mental states. Our intellect and capacity for self-awareness provide our minds with the ability to wander into places beyond the realm of the material. We are pattern-seeking and problem-solving creatures, and bypassing the veil of the “normal” allows us to expand our understanding of the world around us in useful ways and to heal ourselves.

Over the past 30 years, CATALYST has tracked this drive and its effects. Meditation, physical ordeal, prayer, music, intentional breath techniques, dreams and, yes, drugs, have all played their part in the expression of our culture. Our species has developed all sorts of rituals and utilized substances from alcohol and exotic plant alkaloids to synthetic chemical compounds to invite a more receptive mindstate.

The Native American influence here in the Southwest has never faded, and CATALYST has covered many different modern-day takes on traditional vision-seeking ceremonies. In the September issue of our very first year, 1982, at the dawn of the “Just Say No” era, we ran an article by Dr. Andrew Weil about Sioux and Navajo sweat lodges, and the natural “high” achieved within them that can cure flu, alcoholism, and low self esteem. In “Never Go Back On Yourself” (June/July, 1989), A. Glenmore revisited the subject and gave a more detailed account of how these traditional ceremonies are being integrated into the wider Western culture: “Now the ceremonies are gradually being shared with other cultures in an effort to keep them from dying out and to offer the teachings of the old ways. Some Native elders believe the sweat lodges will be a protection for the people and that, as a nation, they re too small and no longer able to protect the earth alone. So other cultures are being allowed to participate and learn the rituals of the lodge.”

In 1987, August/September issue, Kevin Aagaard shared an account of his experience on a Native Ameri­can -style vision quest. The mental clarity and perspective he gained on his three-day solo rite of passage allowed him to understand and to have gratitude for the web of life around him on the planet. Jean Akens described a personal vision quest at an old Anasazi ruin for us in the August/September issue of 1989.

In the February/March issue of 1988, Greta deJong interviewed Sandra Ingerman about the resurgence of shamanic practice worldwide, and its slow infiltration of Western culture. The shaman’s drum, beating hypnotically, induces a different brainwave pattern and allows participants of a “shamanic journey” ceremony to explore psychic realms usually hidden to them. Drumming shamanism was covered once again in August 1998 by Lisa Yoder, who described the therapeutic overlap of traditional psycho­therapy and Native American spirituality.

From the traditional to the contemporary, psychotherapist Karen Kent wrote about Stan Grof’s Holotropic Breathwork technique in June/July, 1988. Grof began his career as a Freudian psychologist and staunch atheist but in the 1950s began performing sanctioned research using LSD as a psychotherapeutic tool. His experiences with his patients led him to an understanding of how useful these drug-induced altered states of consciousness were. When LSD research was banned in 1966, he developed a method of breath control that would allow people to access a similar mindstate without the use of psychedelics. Kent described her own experience with Holotropic Breathwork, saying that “most importantly, I feel that breathwork has cleared a path in my life for experiences that I would never have allowed before, which have positively changed the course of my life, forever.” Pretty compelling stuff. 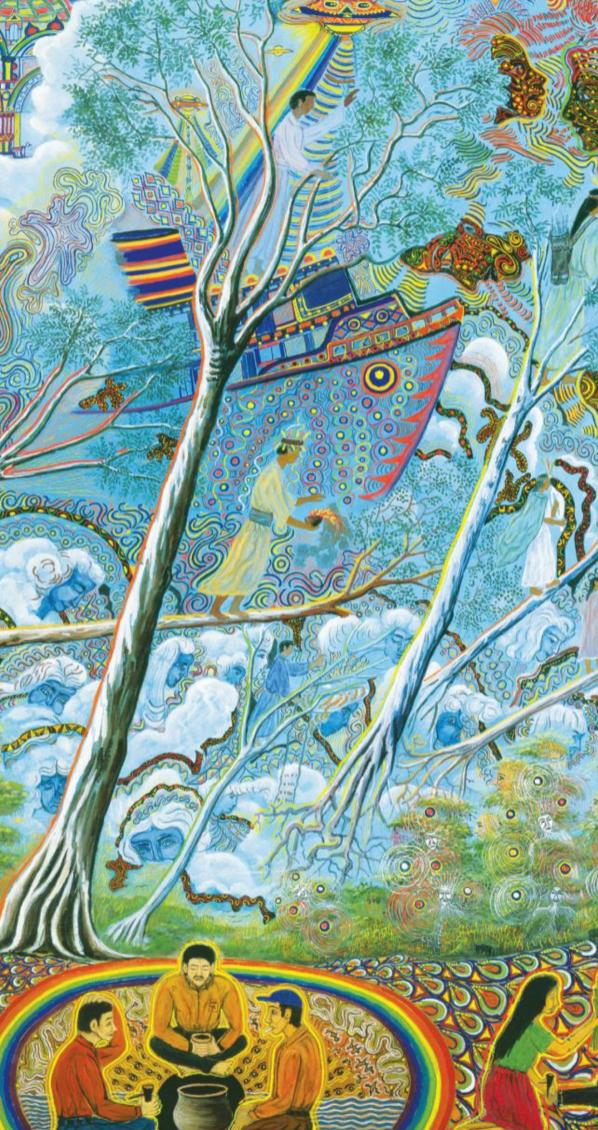 Rebirthing, a practice related to Holotropic Breathwork, developed in the U.S. in the mid-1970s, was covered in 1987 (April-May), by Eve Jones. This breath-based and drug-free technique allows participants to access and understand some of their very earliest experiences and memories, and to heal the trauma of their own birth. Anesthesia and forceps delivery were common childbirth procedures that were especially tough on newborns in the 20th century, and many people found that reliving this suffering allowed them to heal ailments, both mental and physical, that they were suffering currently as adults.

Holotropic Breathwork was covered again in October of 1995 by Eve Leonard, who wrote a detailed account of her personal experience: “I relive the time of my birth; I feel and express my mother’s emotions that I sense she has held inside. In contrast to those feelings of sorrow and anger, I immediately feel held, warm, and safe within her womb.” Many forms of breathwork are practiced today around the globe.

Intentional induction of an altered mindstate is a practice pursued by only a few, but we are all subject to unintentional altered states every night when we close our eyes. Dreams come whether we want them to or not (remembering them is another story), and the human species learned early on to pay attention to the often random-seeming wanderings of our minds at night. The Bible is full of prophetic dreams, and in February 1994 Mark Ian Barasch described his own experiences accessing useful information via the dream-state, when he suffered persistent nightmares about a growth in his neck before he was diagnosed with an extremely early stage of thyroid cancer (and subsequently cured). Amie Tullius wrote a lyrically beautiful piece in November 2010 on the occasion of the publication of Carl Jung’s infamous Red Book, a journal in which he kept all of his dreams and other mental wanderings for many years. Jung’s startling explorations into his own subconscious are both beautiful and menacing, just as our own dreams often are. His realization that there are things in the psyche that are not produced by human action and that appear to have their own lives neatly parallels the sha­manic experience of the universe.

Marilyn Brakensiek wrote about another drug-free and uncontrolled altered state, the Near-Death Experi­ence (NDE), in the Summer issue of 1984, noting that cancer patients who had experienced clinical LSD sessions before the drug was banned and who subsequently experienced an NDE found the two states “indistinguishable” from each other. Not many people know that LSD-assisted psychotherapy was performed in several countries during the 1950s and 1960s, and that the beginnings of a tantalizingly rich knowledge base was gained through this work during the years before prohibition. The Multidisci­plinary Association for Psychedelic Studies (MAPS) began carrying the torch for this research at its founding in 1986. The “psychedelic renaissance” fostered by this nonprofit came to flower at their first conference in April of 2010, which Trisha MacMil­lan covered in an article under the same title the May 2010 issue. MAPS has paved the way for and sponsored FDA-approved studies using psilocybin (the active ingredient in magic mushrooms) to treat end-of-life anxiety and MDMA (Ecstasy) to treat Post-Traumatic Stress Disorder in the US. CATALYST ran an extremely forward-looking article a decade prior to this in 2000, when Erin Geesaman reviewed known facts about MDMA (The Truth About Ecstasy) and found it to be not nearly as abominable as the media hype at the time would indicate. Several of the people she interviewed expressed that they had found some peace and psychological healing through ceremonialized use of the drug. These anecdotes have been validated by the much more recent research showing that clinical use of MDMA in directed therapeutic settings can dramatically reduce trauma.

MAPS-sponsored studies using MDMA, psilocybin, and LSD to treat a number of mental issues are also being performed in other countries worldwide, and the knowledge that we stand to gain from this research is invaluable. Greta deJong attended the December 2011 MAPS conference and wrote of her experiences there for her editorial column in the January 2012 issue.

Along with the resurgence in psychedelic research over the past half decade, American culture has also experienced an increased interest in psychedelic substances themselves. Garrett Alberico described the wonders and hazards of Salvia divinorum for us in “Rocketship to Somewhere” (December 2005), and Paul Gahlinger, a noted scientist, physician and author, wrote “Magic Mushrooms: A Short History” for us in November 2006. This measured but lively exploration of the impact that psilocybin mushrooms have had on cultures both recent and ancient pointed out that these altered states have been associated with religion since time immemorial. It included the famous “Good Friday” psilocybin experiment at Johns Hopkins Uni­ver­sity and the legitimization of the Native American peyote church. Gahlinger also mentioned the ceremonial use of ayahuasca, which was becoming much more popular at the time. In February of 2006, the U.S. Supreme Court had ruled unanimously that use of ayahuasca by the União do Vegetal (UDV) church was allowable under the Religious Freedom Restoration Act. Since then, the Santo Daime, a similar church, has also gained protection of their ceremonies.

Ayahuasca is credited with helping many people cure themselves of addictions to drugs such as heroin and alcohol, a trait shared by other psychedelics. In March 2011 Paige Guion wrote up a heart-wrenching account of her own daughter’s descent into heroin addiction, and the treatment with the West African herb iboga which allowed her respite from the addiction. Ayahuasca was covered in much more depth once again by Trisha MacMillan in May 2011. The use of this psychedelic tea by Amazonian tribes goes back thousands of years, and Western culture is beginning to pay attention to the healing potential of this ritual. Illustrated lushly with paintings by Pablo Ameringo, a noted ayahuasca artist, the article covered interviews with several people who have experienced ayahuasca, and explained the science behind the substance and how it induces a psychedelic state in the brain. Macmillan also met Graham Hancock at a local retreat and wrote an article on his life and work the year prior in the December 2010 issue. Hancock, previously a writer for The Economist magazine, came to wider public notice as the author of such books as The Sign and the Seal (exploring the mystery of the Biblical Ark of the Covenant) and Fingerprints of the Gods, which investigated evidence of lost civilizations much older than orthodox history will allow. Hancock has found much personal healing via the ceremonial use of ayahuasca tea, and credited it with increasing his personal happiness and allowing him to begin to explore his creativity in the realm of fiction writing.

CATALYST has interviewed quite a few famous psychonauts over the years. In January of 2007, Diane Wilde spoke with author Daniel Pinchbeck (Breaking Open the Head: A Psychedelic Journey into Modern-Day Shamanism and 2012: The Return of Quetzaquatl) while he was in Salt Lake City. She asked how people might mitigate the psychological risk of using psychedelics.

“The risk can be reduced by using proper containers, such as the Santo Daime or the Native American Church, something with a lineage,” he said. But, he added, “the alternative community is becoming more aware and more sophisticated about the use and misuse of psychedelics. We can create our own containers.”

Recently, Terra Cronshey spoke with inner space explorer Mitch Schultz, who created a documentary about Dr. Rick Strassman’s research into dimethyltryptamine (DMT), a hallucinogenic substance synthesized within the human brain and also found widely in nature. DMT is the active ingredient in ayahuasca. Schultz describes DMT as a tool for “reality hacking,” that is, to sense and influence the multi-dimensional matrix of life in purposeful ways to effect healing on both a personal and cultural level. “Through food and general sustainability practices, our physicality, thought, emotions and behaviors directly relate to how we recognize and care for the natural world,” he told CATALYST. By acknowledging our connection to everything around us, we can create a successful realignment with nature that begins with the individual, grows into local community, and blossoms into a well integrated whole.”

Trisha MacMillan lives and writes in Salt Lake City and has been contributing to CATALYST since 2010.

This article was originally published on August 31, 2012.