Learning in the Labyrinth

For students in the community: a labyrinth at the University of Utah. Here is the story of how it got there. Also: Sacred Geometry in Action, by Heather Williams, and "Find Your Labyrinth."
by Katherine Pioli 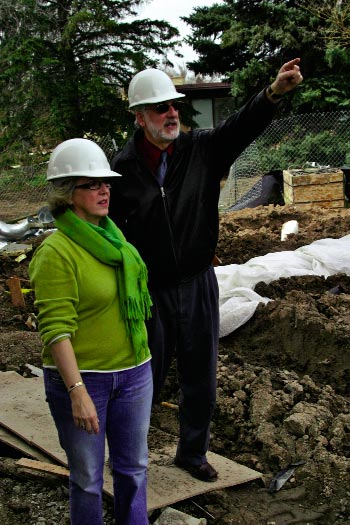 The nature of a labyrinth is to create a centering, meditative experience," explains Dean Robert Newman, contemplating the significance of the ancient design one recent afternoon in his well-organized administrative office. "It also embodies that renascence notion of the active and contemplative lives," he continues. "So, theoretically if you are in a dead end or off in your life somewhere or uncentered, the experience of walking can get you back in synch."

Such an experience occurred for Newman, Dean of the College of Humanities, five summers earlier. At the time he was considering the imminent construction of a new building for his college, but had yet to decide on what or how to make it unique. On an unrelated trip, Newman and his wife traveled that summer to the south of France, in the rural region of Provence. In this serene location he was soon to have an experience which he calls "one of those nice synergies that just sometimes happens in life."

On that very same week in early summer, Terri Holbrooke, a businesswoman from San Francisco and Utah native, also journeyed to France. She was to visit Chartres, a tiny medieval town only a few miles from where Newman and his wife had chosen to stay.

While Newman was deeply engaged in research, Holbrooke spent almost her entire vacation exploring the Chartres Cathedral. Most importantly, she sought through her journey an intimate familiarity with the circular, winding pattern on the floor of the sacred building, the famous labyrinth of Chartres. For Newman, a visit to the Cathedral and its famous stone floor were not on the agenda.

The history of the Chartres Cathedral, arguably one of the most famous in Europe, begins with the inception of its construction some time around the early 11th century. During the time of the Crusades the people of Chartres who did not go off to Jerusalem, and did not go to war in the name of religion, took on a project of pacifism and peace. This began the construction of the nave, and the dwelling room for the labyrinth. As Terry learned, this labyrinth, more than any other found in the world, has an extraordinary history. The people of Chartres, she explains, "built that portion of the Cathedral in complete silence. It was something like 14 years of work executed as a complete pacifist gesture. They did it with reverence; when you walk into the Cathedral, you immediately sense it."

The pure design of a labyrinth, not exclusively that which is found in Chartres, is an ageless design of beauty, meditation and transformation. Art from ancient, pluri-theistic Greek cultures exhibits its pattern. Mandalas from Asia, giant earthen formations from ancient America, hieroglyphs from Egypt, all of these are or contain examples of labyrinths. The designs vary but all hold one common element: a single circular path to a center.

It is also important to know what a labyrinth is not. Robert Newman point out that it is not, for example, a maze. "A maze is meant to be confusing. Often when I say that I have done a labyrinth people think of ‘The Shining.’"

In contrast, a labyrinth has no dead ends or wrong turns. It has one entrance which also becomes the one exit. Stepping onto the labyrinth begins a journey to the center, but one which is not straightforward. The path winds back on itself in folds and curves like the folds and curves of the brain. Once center has been achieved the walker turns and follows the exact same path out.

The pattern of the famous Chartres labyrinth, consisting of 11 elongated concentric loops, is imitated by other labyrinths all over the world. Holbrooke traveled with a group of enthusiasts expressly to spend seven days walking this stone design. The group was led by labyrinth authority Reverend Dr. Lauren Artress, who had been instrumental in installing two walking labyrinths in the Grace Cathedral in San Francisco.

Holbrooke and her group explored the Cathedral from top to bottom and walked the labyrinth twice daily. They had access to the labyrinth at night and to the lower areas used by the priests, and also walked the half-mile to the rarely visited, now-overgrown stone quarry from which the floor’s stones where hewn. "The place," recalls Holbrooke, "had the exact same feeling as the church."

All during this week, Newman was only a few miles down the road.

Holbrooke, aware that some old friends had a country cottage nearby, decided one day to pay a visit. When she arrived at their guesthouse, the paths and stories of these two strangers came together.

To anyone else, the fateful encounter may be inexplicable, but for Terri it was only another powerful working of the labyrinth. "Like everything with the labyrinth, it was effortless. Robert and I met the evening that I arrived, around 4 o’clock, and by about 5:15 we had decided there would be a labyrinth at the new Humanities building at the University of Utah. It was conceived in moments. Literally before we even had dinner, it was decided."

That labyrinth now lies outside the northeast corner of the Carolyn Tanner Irish Humanities building, named in honor of Reverend Irish of the Salt Lake Episcopal Church. The design, a smaller version of the Chartres labyrinth, is colored onto large, even slabs of cement. Simple yet elegant, it is the culmination of two different visions.

The path that led Dean Newman to construct the labyrinth in place today began with his desire to set the new Humanities building apart from all others on campus. "I wanted a beautiful, aesthetic, ecologically sound, light-filled building. It is spatially located in what will be the center of the campus once the five-year master plan is enacted. So it will eventually anchor the academic quad."

Newman sought the synergistic combination of the active and contemplative central to the humanities.The labyrinth sounded like an ideal extension and physical manifestation of this purpose.

The potential significance of the building as the new core of campus put added pressure to create something unique and meaningful. "I had to consider the fact that people would be passing through a lot, so it was extremely important that it say something special."

During this early phase, before meeting Terri Holbrooke, labyrinths were somewhat on Neman’s mind, but no one idea stood above the rest. Even though he had not yet walked the one at Chartres, he had walked numerous others in the world.

For Terri, on the other hand, the labyrinth had been a central guiding force in her life for some time, ever since her first walk through the labyrinth at Grace Cathedral. The first time was with her daughter. "I had never heard anything about it but she had come to visit me in San Francisco and had recently had an amazing experience walking one during a very difficult time in her life. The first time I walked, with her, I had an extremely powerful sense that our relationship was shifting. I was now going to be honored with the experience of watching my daughter walk her path instead of leading her."

From that moment of revelation Holbrooke found peace in walking the labyrinth and she sought its meditative energies often. Her location in relation to the labyrinths of Grace Cathedral was ideal. "I lived right across the street." So Holbrooke became well practiced in walking its path. She recalls quite seriously, "I walked it every morning for four years."

As Holbrooke continued her practice of walking, her emotional and spiritual connection with the labyrinth grew. When she finally felt the need to move back to Utah where her daughter lived, she felt only one obstacle holding her back. What would she do without a labyrinth to walk? "I had had the feeling for a couple of years that I couldn’t move back to Salt Lake until there was a labyrinth. I just couldn’t." The day that Terri and Robert met, that bubble of resistance was broken.

After their meeting, things started falling into place both for Robert Newman and for Terri Holbrooke. Terri’s first action was to introduce Robert to her group leader. Rev. Artress was deeply committed to promoting labyrinths in the United States.

Robert remembers first meeting Rev. Artress in San Francisco. They began to discuss designing a labyrinth for the building. The conversation continued and plans for the labyrinth developed, not only for the one at the University but also for one being built at Salt Lake’s IHC hospital, according to the last wishes of the brother of Terry Tempest Williams. To assist the process, Rev. Artress traveled occasionally to Utah. On one of her earlier visits Terri Holbrooke hosted Lauren, Robert and Terry Williams at her house. "I felt like a fly on the wall observing these three people who were coming at the world from three very different points of view but who really had so much common ground. I feel that the role Lauren played, especially that night, was to ground both Robert and Terry and to infuse them with a sense of what the labyrinth needed to be about. She built on the sense that it was not belonging to any single person or group, it was for everyone."

Two years after the fateful summer in Provence, construction began at the University for the Humanities building. Along with that construction began the formation of the labyrinth. This past fall the building was finally completed and dedicated. The labyrinth rests on the back patio just beyond the rear doors, a perfect place for someone seeking solitude and meditation.

Now, with the project behind them, Terri and Robert hope its presence reaches the community. After all, even for Terri who now can’t imagine living without a labyrinth, walking one for the first time took a little bit of encouragement and guidance from someone close to her. After that first step, however, the possibilities unfurled.

Many of Robert’s dreams for the labyrinth lie in its scholarly possibilities. He hopes to organize seminars and lectures revolving around various facets of the labyrinth. On a more personal level, Dean Newman also hopes that the metaphorical guidance offered by the design will reach the community. "[It is] the idea of focusing on process rather than destination which is extremely important _- not only in labyrinths but in life. The whole idea is that the labyrinth mirrors life’s pathways, life’s experience, and if you only focus on the goal and not the process of attaining that goal often there is something lost. That is when you get into the linear mindset more than the complexity, the possibility of finding an alternative path that is much more fruitful."

Terri, too, hopes the labyrinth can unlock desires, dreams and the confidence to pursue them for those who walk its path. "Go walk it," she encourages people, "there are no rules." With the wisdom of experience she adds, "don’t walk it because you should and don’t set a timetable. Just be open to the thought that maybe this would be a day it would give you some clarity. One thing _Lauren Artress always says is to be gentle with yourself in the labyrinth. Don’t have big expectations. Just be open and curious."

The labyrinth is heated and therefore available all year round. For a map to its exact location, google Carolyn Tanner Irish Humanities Building on the University of Utah campus.

Katherine_Pioli is CATALYST Magazine’s staff writer when she isn’t off fighting fires in national forests.