Leadership: Down on the “Who” Farm

Intelligent rabble-rousing works. Two sets of Return Peace Corps volunteers (RPCV) had made public campaigns calling on our new president to rip out part of the expansive White House lawn and plant an organic garden. Dan Simon and Casey Gustowarow championed the WHOFarm (White House Organic Farm) Project, while Amanda Fuller and Justin Mog (RPCV-Paraguay) created their campaign around Obama’s campaign slogan, referring to it as a “Hope Garden.” Author Michael Pollan (“The Omni­vore’s Dilem­ma: In Defense of Food”), often referred to as our nation’s “First Farmer,” advocated for the garden as well, as a “symbolically resonant step in building a new American food culture.”

It was not an unprecedented suggestion: Eleanor Roosevelt’s World War II Victory Garden is well known, and started millions of Americans gardening. Less well known is that Woodrow Wilson allowed sheep to graze and fertilize the White House lawn to save resources during WWI. 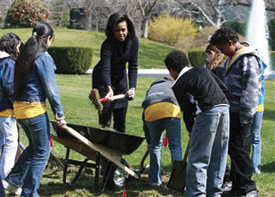 Any time is a good time for a garden, but why now? As Obama himself has said, America’s agricultural system is built on cheap oil. “As a consequence, our agriculture sector actually is contributing more greenhouse gases than our transportation sector. And in the meantime, it’s creating monocultures that are vulnerable to national security threats, [and] are now vulnerable to sky-high food prices….”

Obama gets it, and knows that a White House organic garden can be a terrific catalyst to inspire millions of Americans.

The garden idea also has an international precedent: Thailand’s Princess Maha Chakri Sirindhorn has an organic farm at her Thong Noi palace which covers 42 rai (a measure of space equal to 1,600 square meters). It is a model of sustainable food production, and the Princess herself gets her hands dirty in the garden as an example to her people and simply because she enjoys gardening.

The Obamas broke ground on their garden on March 20: a 1,100-square-foot garden with 55 types of veggies as well as berries, herbs and two beehives. (Can chickens be far behind?) The food will be used to feed the Obamas and also for state dinners and other official events. Elementary students from Washington-area Bancroft Elemen­tary will tend to the garden as part of their school curriculum.

The Obamas hesitate calling the garden organic or sustainable, likely to avoid the label of “elitism” from conservative naysayers. Nonethe­less, they are tempting that tired fate by growing arugula. During the campaign, John McCain and other Republicans labeled this vegetable “elite” and criticized Obama for eating it. (Go figure.)

Above and beyond the political fray, this symbolism and leadership from the White House could prove beneficial to the green economy in other ways. While not everyone with organic gardening skills can work on an estate such as the White House as a full-timer, many homeowners in the U.S. have space and desire for gardens, but not enough time or know-how. Setting up and maintaining organic gardens can be a fun and lucrative business. Two companies in San Francisco have begun doing just that: Freelance Farmers (www.FreelanceFarmers.com), and MyFarm (www.myfarmsf.com). Imagine millions of Americans organically gardening and millions more supporting eco-entrepreneur organic gardeners to do it for them. (A Salt Lake-based matchmaking database will be available in early 2010 linking would-be city gardeners with those who have the land. Watch CATALYST for more information.)

How much of an effect can this have on the economy and our agricultural system? Symbol­ism from our First Residence carries tremendous effect. John F. Kennedy is largely credited with killing the American hat. He refused to wear one (despite pressure from hat manufacturers, according to legend), and within a few years, wearing a hat was viewed as something your grandfather would do. Can we hope that within a few years, the large, chemically intensive lawn of ‘perfect’ green grass will be viewed as out of touch, ill-informed, and something only grumpy old people might do-replaced, instead, by lively, interesting and productive edible gardens?

Scott Cooney is the author of “Build a Green Small Business” (McGraw-Hill), and looks forward to the day when the green economy is simply referred to as…the economy.