As the traditional season of thanks and giving nears, we may consider approaching it with the same heart as was demonstrated for us by our brothers and sisters from the Sikh faith at the Parliament of World Religions, held last month in Salt Lake City. For the Parliament, 70 Sikhs from England along with 100 volunteers from Utah and California hosted and served Langar, a sacred institution of sharing food.

In Punjabi, a language originating in northern India and Pakistan, Langar (pron. lan-gar) is the name of the community kitchen or common kitchen at a Gurdwara, the Sikh place of worship. This is a space open to people of all faiths. At Langar, food is served unconditionally, regardless of caste or gender, from royalty to the homeless. People from all backgrounds become equals; they sit at the same level and share the same food. And, here, all meals are free. 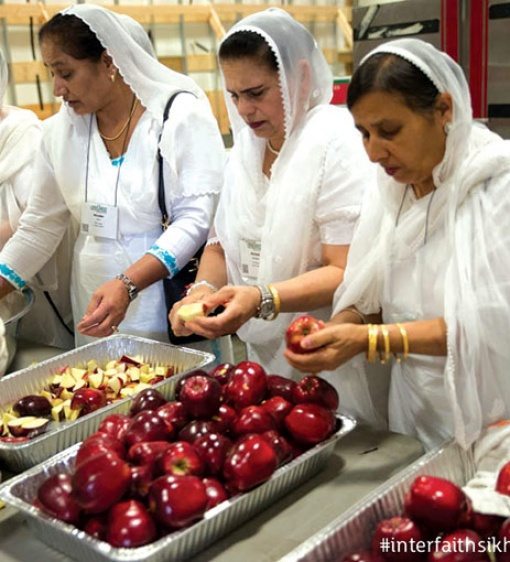 Langar was started by the first Sikh Guru, Guru Nanak (1469-1539). As the story is told, he was given 20 rupees by his father to do sacha sauda or “true business.” On his way to begin his business, young Nanak passed hungry sadhus, ascetic holy men, and instead spent his 20 rupees to feed them. When he returned home and told his father, his father was angry and scolded him. Nanak replied that he had done the “true business” by feeding the hungry holy men. Thus began the tradition of Langar, serving food for free. A message in compassion. To the Sikh community, there is no greater work than that of compassion.

Last month, during the Salt Lake meeting of the Parliament, the Sikhs and volunteers served 7,000 free meals each day of the gathering. Meals consisted of legumes, green salad, yogurt, chapatis, fresh fruit, chai and dessert.

The Sikh Temple of Utah in Taylorsville along with help from the Utah Food Bank, Catholic Community Services St. Vincent de Paul Soup Kitchen, Parliament of the World’s Religions, Salt Palace Convention Center Food Service and Thomas O’Donnell of Cabrini Col­lege (an expert on food waste recovery) distributed to area homeless shelters. Leftovers of Langar totaled nearly 4,000 pounds of food and fed 3,100 people. This is not an unusual act of giving for a faith in which its practitioners commonly give a 10th of their income to charitable causes.

For Sikhs, prayer and service go hand in hand and it is an honor, not an act of charity, to serve the Langar. Prayers and acts of purification are integral to the preparation of the meal.

Participants remove shoes to outwardly signify the entering of a sacred sanctuary. Hands are washed and heads covered, acts that symbolize humility and modesty and the purging of bad traits in preparation to receive spiritual blessings.

While preparing and serving the food, the Sikh workers recite prayers. Service makes us humble, prayer makes us wise, and everyone participating in Langar—preparing, serving and eating —is blessed.

My four days spent at the Parliament of the World’s Religions were made meaningful by the conversations I had with strangers and the new friends I made. I am grateful for the opportunity to tap into the field of infinite unconditional love and compassion created by the powerful intentions of 10,000 presenters and visitors.

May we carry on the work of doing the “true business” of giving and receiving with compassion, respect, modesty and devotion, knowing it’s a continuum. May this blessing, given and received, spill into our daily lives 365 days a year.

This article was originally published on October 30, 2015.