Couldn’t take the heat (or a/c bills) this summer? Consider a swamp cooler for next year!

The heatwaves of summer are, for the most part, over. As we enjoy the cooler temperatures, it’s easy to forget that in just another nine months, the Utah heat will be back—and according to an overwhelming consensus of scientists, likely to just get worse over the coming decades.

Luckily, staying cool in Salt Lake doesn’t have to break the bank. Yes, air conditioners are expensive to run. But here in our arid desert clime, we don’t have to rely on energy-intensive tech to keep our houses a reasonable temperature in the summer. We have a better option (and one that’s been used for millennia): the swamp cooler.

The evaporative cooler (aka swamp cooler) is an artifact of the desert. Mention the mechanism to someone from humid climes, and they will look at you with disbelief. How could blowing air through wet pads possibly cool your house? But it’s a time-tested principle.

Probably the best example is the Persian bâdgir, or windcatcher—a tower that catches wind, creates a pressure difference in the living structure and draws air from underground or a covered water reservoir, using both the geo­thermal differential as well as evaporation effect for cooling.

Evaporative cooling only works in dry climates. In the East (or in the South, or even in the Pacific Northwest), a swamp cooler would just make the humidity worse, without any noticeable lowering of the inside air temperature.

Here in the West, though, we’re lucky. We’re not limited to the relatively expensive and (in my opinion) claustrophobic method of blowing air across coils cooled by compressed-and-then-expanding greenhouse gases. Judging by cost or environmental impact, in the West the winner is clear: The swamp cooler. Whether your house is without cooling now, or your a/c is on the quits, consider a swamp cooler to keep cool next summer!

The costs of cooling

A swamp cooler is essentially a big fan that pulls air through moist pads, using the cooling effect of evaporating water to cool the air.

The a/c unit has the added cost of running a compressor, and that’s not cheap. Compressing the refrigerant is an energy-intensive process. Running an average a/c unit in Salt Lake City costs around $100 per month in electricity, whereas a swamp cooler should cost you around $4 per month.

Swamp coolers do use a lot of water. An average-sized swamp cooler will consume from three to 15 gallons per hour. Using 10 gallons per hour as a rough middle ground, this comes out to something around 72 gallons per day. This sounds like a lot, but keep in mind that the average American uses 80 to 100 gallons of water every day—so running a swamp cooler shouldn’t quite double the use for a single person. In a four-person household, this increase is even less pronounced.

Be aware, too, that producing electricity uses water—a lot of it. Most electricity in Utah is from coal plants. The most efficient plants will use an average of 15 gallons of water to produce one KWh. That’s 464 gallons of water per day to run that air conditioner. (This doesn’t take into account the water costs of extracting, preparing and transporting all that coal, either.) So the added cost of using extra water for your swamp cooler in Salt Lake is far, far less than the cost of using that much more electricity with an a/c unit.

Which type for you? 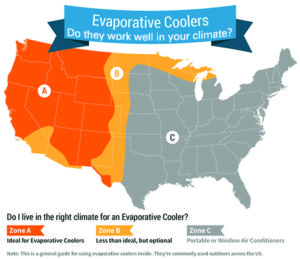 If you are considering installing some kind of cooling device in your house (or replacing the a/c) and I’ve sold you on swamp coolers, don’t just rush out and buy the first one you see. They come in a variety of configurations, and install a couple of different ways, too.

The most common type of swamp cooler is the big, boxy window-mounted type. Window mounting is a lot cheaper and easier—something most homeowners can do themselves, as long as they’ve got a couple of people to hold the cooler in place while it’s attached. If going the window-mount route, install the cooler on a north- or east-facing window, if possible. Keeping the cooler in the shade really helps.

High-efficiency single-inlet types (variation on a window type) are also available which use one very thick pad instead of multiple walls, and a much bigger blower. They’re also quite a bit more expensive.

Down-draft models are mounted on the roof. While roof installation is probably better, since it makes bringing the cool air to a central location easier, it requires a hole cut in the roof with ducting down through the attic to a vent in the ceiling. This takes it out of the DIY realm, as you’ll need a HVAC contractor.

If you have a forced-air heater, one of the best swamp cooler options is to connect the duct from the swamp cooler to the existing heating ducts in the house. This way, cool air is delivered to the entire house.

Unlike a/c units, swamp coolers do require a little bit of maintenance. They need to be decommissioned at the end of the season and cleaned up and prepped at the beginning of hotter weather. They also need to be periodically checked on and possibly cleaned during the summer.

If you’ve already got a swamp cooler, congratulations! At the end of the season, when you feel fairly certain you won’t need cooling any more, shut off the water and power to the cooler, then disconnect the water line from the water inlet float valve (this will prevent the valve from breaking when freezing). Unscrew the drain plug stem and set aside. Let the pan drain, then rinse it out well. Clean any deposits that have built up, then rinse again. Stow the drain plug and stem in the bottom of the tray where it’ll be safe for next year.

Depending on the type of installation, you’ll want to replace the duct damper (typically a flat piece of sheet metal that blocks off the duct right near the cooler outlet). Cover the unit with a canvas evaporative cooler cover (get one the right size for your cooler). Again, depending on your installation, putting a duct pillow in the duct where the air enters your house is also a good idea.

While swamp coolers are by an order of magnitude more efficient and environmentally friendly than air conditioning, there are some ways to help keep even the costs of running a swamp cooler down:

This article was originally published on September 2, 2017.