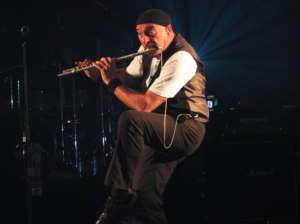 This will be the first time Tull has played in Red Butte Garden, which offers an idyllic outdoor setting. Utah has been a good market and audience for Tull over the decades, selling out concerts. One favorite venue was Deer Valley ski resort in 2000 – a pastoral setting of blankets on grassy hills sloping from mountain to stage under starry skies, as Tull played songs in the Utah wood.

Not bad, for some guys just trying to get a regular gig in the ’60s.

Very few bands have been as reliable as Jethro Tull, returning year after year, continuously without a break, since 1967. That alone is a major accomplishment. Only a handful of others like the Stones, Moody Blues, and ZZ Top are still playing.

Like Tull’s longevity, their music bridges generations and styles from the 1970s to 2017. Tull’s highly versatile repertoire ranges from folk ballads to heavy metal riffs, medieval poetry to pop hits, progressive rock to liturgical music. Few bands still energize Baby Boomers like they did in the ’70s, along with their Gen-X kids and Millennial grand-kids. Tull is a timeless experience, living in the past and present.

The one constant amid the band’s 50 years of changing members and music is Ian Anderson. Tull’s inimitable sound and legacy are embodied by their immortal front man – whose vision, voice, lyrics, flute, guitar, body, costumes and life force have driven the band since its beginnings. Anderson himself is a figure who transcends time and age – like an archetype or mythic image from the collective unconscious, Ian appears like a primal manifestation of masculine passion or psyche, the animus.

A world-class flautist, Ian Anderson taught himself to play flute. “Well, I’ve never taken a lesson, but I’ve listened to many good musicians and learned from them,” he notes. “More than a flautist, I consider myself a musician, I play several instruments. I’m a better on flute than guitar, but I worked hard to master them all.”

Ian seems more than a musician. He melds lyrics, voice, melody, instrument, body, and movement into one seamless expression.

I cross paths with Anderson every 20 years. I first saw Tull in concert in 1977, mesmerized by Ian’s stage presence, agility and antics. In 1997, I interviewed Ian in Salt Lake, asking him how it felt to perform for 30 years. He simply said, “It feels like doing a good job.”

I reconnected with Ian this month and asked what he thought about their 50th anniversary.

“I don’t pay attention to anniversaries. Record companies care about that sort of thing, and use it for promotions,” he admitted. “I just keep playing music, in an effort to create new material, and improve, do new things, evolve.”

A rather pragmatic view for a rock band in their Jubilee year.

“I’m just pleased to still be here and doing what we do, it’s very satisfying,” Ian says.

Yet longevity itself is extraordinary.

“Yeah I’m grateful,” he admits, “I could have picked a harder occupation, like trash collector or construction worker and gotten worn out sooner, had to retire. Music is energizing. I’m lucky to be doing what I love all this time, and to keep doing it.”

Lucky indeed, but that kind of success takes more than luck. Ian attributes the band’s success to the times in which they emerged.

“The ’60s-’70s were a very experimental time in music, it was wide open for exploring new styles and sounds,” he explains. “It was an amazing time to come alive and find one’s place in music.”

Truly. Yet the ’60s-’70s were also a time of tragic excess, taking many talented lives from the stage. Unlike many of his peers, Ian survived and thrived, vibrant from his 20s into his 70s. He attributes his longevity to healthy living.

“I’ve outlived many other musicians of my time, a number of guys I knew well or played with are now gone. I didn’t want to do pot or drugs, perhaps because others were doing it. I wanted to be different. I enjoyed a drink now and then, but not to excess, not like others who performed on a full tank.”

One would guess that his signature stage aerobics contributed to fitness as well. Over the years, Ian leaped, pranced, waved his arms and flute, jumped, danced, squatted, swayed, moved in ballet, and balanced on one leg as he played.

Yet the private Ian Anderson was not the wild man he presented on stage, but a disciplined professional. A highly focused, serious musician and performer, Ian was always 200% present on stage, fully alive in body and mind. He was prepared, organized, focused, conscientious, on time, and ready to play, to his maximum capacity. Ian wrote his own music and lyrics, and prepared the musical notation sheets for other performers and orchestras.

Never too old to rock and roll, still too young to die, Tull now moves into its sixth decade.

I asked Ian, looking back, what does it all mean? Was he guided by fate or destiny, to find Tull as his purpose in life?   Was he “looking for a sign that the universal mind has written you into the passion play”?

“Well, it’s tempting to think that fate or destiny had something to do with it, but I don’t really believe that, not really. I don’t look for any grand design or cosmic purpose in my life,” he relents. “Although I sometimes play in churches and cathedrals, I’m not Christian, I don’t believe in any particular god. I believe in doing good work.”

That may be as mystical as it gets. Like Jesus said, “split a piece of wood and you will find me.” Ian may not see a cosmic role in his career, yet his image and performances held a larger cultural meaning or symbolic power for millions of people. While he mainly cared about playing well, the persona emanating through him was larger than life, playing a role for other lives who lived through Tull in some way. Perhaps if Darth Vader evokes the archetypal male shadow, Jethro Tull evokes the archetypal male life force, animating body, the ecstasy of simply being alive.

This article was originally published on May 18, 2017.