Its all in the eyes: Monet to Picasso at Utah Museum of Fine Art 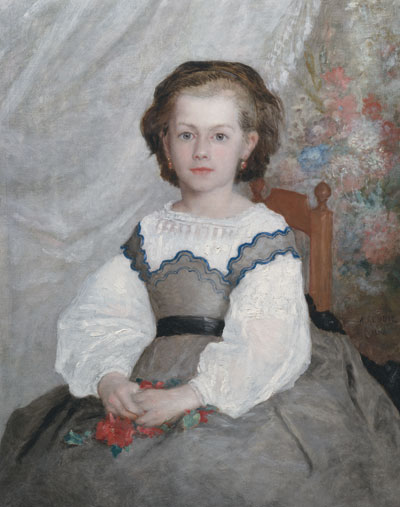 On June 23rd, the Utah Museum of Fine Arts welcomed what may be the most significant art exhibit Salt Lake City has ever seen, the Monet to Picasso exhibit. Having experienced museums all over the world, I was excited to view this exhibit considering that the collection was as significant as any great museums I had been to. The exhibit represents a 100-year span (1864-1964) as one wanders chronologically through rooms, from impressionism, to post-impressionism, early modernist sculptures and cubism, finishing in the avant-garde period. This touring exhibition (visiting only four North American cities) comes from the Cleveland Museum of Art, which shares this extraordinary show with the world as their facility is being renovated and enlarged.

I was prepared to be awed by some of my favorites. Van Gogh with his thick, swirling brush strokes, so integrated that it’s difficult to discern the foreground from the background. Rodin, and the Fall of the Angels: two figures (male and female), clinging together and swirling in the marble ‘wind’ reminiscent of Dante’s Paolo and Francesca, held in eternal embrace while buffeted in the inferno.

What I wasn’t prepared for was to be deeply moved by works that I had not seriously considered before. Picasso’s blue period is not one that resonated with me until I came across the incredible ‘La Vie’ (life). Standing before this large painting, I learned that the main figure was believed to be Carlos Casagemas, Picasso’s dear friend who committed suicide after being rejected by a lover.

He stands holding a woman in his arms, while looking at another, older woman holding a baby. Initially the figure’s expressions struck me; Carlos stares with exquisite suffering into his mother’s face; his lover looks down with resignation, perhaps regret, and his mother with an expression only a mother could display at the death of her child. But we see a mother’s anger as well; she understands that he is rejecting the life she gave to him. Carlos’ hand points to the mother in the same gesture as in Michelangelo’s ‘The Creation of Adam,’ and I wonder, is Carlos’ gesture acknowledging the life his mother gave to him, or is it symbolically returning this life to his creator?

This is all conjecture of course but as this (and any) visual story plays out through images of life and death, one notices details that expand one’s perception. We can never fully know the artists’ intentions, but we can catch a glimpse of their vision. We can choose to shrug our shoulders and walk away, the same as when we came. Or we can surrender to the image and fill ourselves with the poignant beauty of all that it implies.

Moving into the Surrealist (and final) room, I felt at first disconnected with the art (perhaps that is intentional) until I focused in on Dali’s ‘The Dream.’ As with ‘La Vie,’ I looked into this painting and allowed the images to slowly reveal themselves to me, as in a dream. Freud and his theory of psychoanalysis inspired surrealists to explore the inner depths of the mind through their art. One must look closely at the images Dali creates in ‘The Dream’ (some are tiny but significant) to fully grasp the disjointed story playing out in the dreamer’s mind. There is an obvious Oedipus theme: men reach inside large red pillars, clearly displaying Freud’s theories of dream images in the ‘Interpretation of Dreams.’ This painting portrays the complexities that lie in our subconscious. It takes some time to analyze… (that’s a joke).

I must say it was an amazing journey through these masters’ halls, beginning with the dreamy eyes of Renoir’s Romaine Lacaux (he was so good at eyes, wasn’t he?) and ending with the absent eyes of Dali’s dreamer. It occurred to me that this is an exhibit of shared vision: We view the looks of the painted subjects as they view something beyond anything we could ever know.  u

This article was originally published on July 8, 2008.