In the Neighborhood: Garden is Saved

Landscaped parking strip at historic residence gets to stay.
—by Katherine Pioli

The pioneer house on the southwest corner of 10th East and Third South, known as the George Baddley house after its first occupant, is the site of some encouraging cooperation between city and residents.

Last October, CATALYST reported the story of Timmi Cruz (“SLC’s ‘Other’ Community Garden”), at the time a tenant at the house, and his struggle to save the rock and vegetable garden he had constructed without the necessary permits in the park strip around the house. After nearly a year of negotiation between the homeowner, David Schutt, and the city’s Historic Landmark Commission, the garden is here to stay.

I recently toured the modified garden with Evan Schutt, the homeowner’s brother. Our first stop was at a 15-foot-long stonewall garden bed on the east side of the house filled to the brim with green plants—pepper, eggplant, tomatillo and basil. Evan Schutt, who, along with his brother and dozens of supportive community members and neighbors, attended a series of city meetings to find an amicable resolution to the issue, says that, even from the beginning, the members of the Historical Commission seemed to understand the value of the garden they had built. “I could tell they didn’t want to just say no to our project,” says Schutt, “but the fact was that construction had started without permission, and especially with this being a historic landmark, that was a huge issue.”

Timmi’s rock garden, it turns out, didn’t encircle just any old house. The Baddley house, a Salt Like City historic preservation landmark site, was constructed in 1871 for the family of pioneer George Baddley. Making alterations, even something as minor as changing the windows, in homes listed on historic registers, can be an ordeal as preservation committees weigh in on whether the changes will compromise the historic value of the house. But David Schutt was able to use the Baddley home’s past to his advantage.

Originally, the house stood alone on many acres of land that George and his two wives, Eliza and Charlotte, put to agricultural use by growing a fruit orchard and a vineyard. The property even held a wine press and a distillery. Schutt argued that the current rock garden—with its vegetable beds and rock benches made from stone such as oolite, green marble and river rock, all quarried in Utah—actually preserved the original character of the home and its agricultural past. In fact, some of the stone copies the color and species of the home’s foundation. In the end, the city agreed the garden could stay but with limitations.

Turning the corner onto 300 South, Evan Schutt and I continue our tour of the park strip rock garden. A row of tomato plants lines the sidewalk and rock benches snake along the parking curb. “We had to take some things down,” says Schutt. The fire pit, some of the stone patio and platforms and a hanging swing, Schutt points out, are no longer. The tallest walls, those that blocked visibility for passing drivers, are also missing. “We increased access from the street for pedestrians and utilities, access to the gas line, stuff like that,” says Schutt. 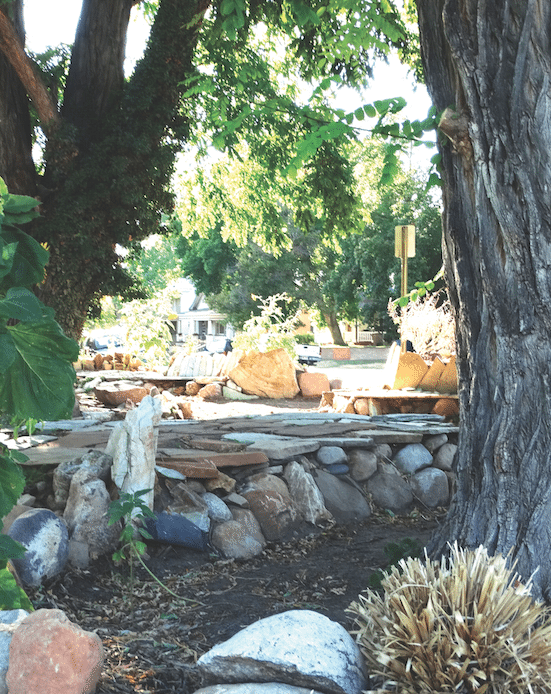 But, all in all, the feeling of the garden is little changed. The garden still offers a welcoming place for the community. Benches offer friends, neighbors and passers-by a place to rest in the shade. Vegetables—now tended with help from members of the group Artists For Local Agriculture—still spring from the earth, tempting those who walk by.

“There was a lot of public comment on this issue,” recalls Salt Lake City principal planner, Tracy Tran. From the city’s perspective, says Tran, “the park strip is public land and not the property of the adjacent landowner.” So the home­owner, David Schutt, had to take a step backwards with his project and submit plans for consideration and approval by city engineers, transportation and public utility. His plans were all approved. Then, he had to get the thumbs-up from the Historic Landmark Commission.

The homeowner now has a Certificate of Appropriateness, says Tran, authorizing the structures and gardens that are currently in place. From here out, it’s up to Schutt to adhere to the permit and city codes.

And, unless someone complains again, sending law enforcement to Schutt’s door, the city is happy to remain hands off and trust that David Schutt is the attentive, caring custodian the Baddley property really needs.

This article was originally published on August 1, 2015.