In the Details: Religious Meltdown

Watch out when this religious levee breaks: Our weekday names are pagan.
by Paul Gahlinger 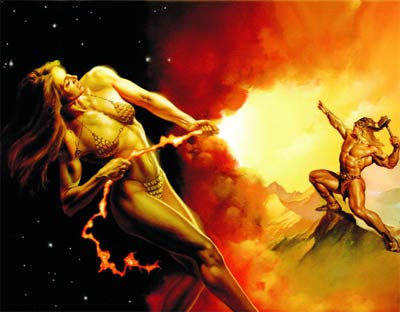 Our names for the days of the week don't make a whole lot of sense. Ask anyone, "What exactly does Tuesday mean?" You will probably get a puzzled shrug and a look that says, "Don't you have more important things to think about?" This has been bugging me since I was about seven years old, and I know it is not a big issue, but one thing I've learned in life is that if you take care of the little things, the big things take care of themselves.

And it is not such a little thing. Religious differences account a good deal of conflict in the world. Eighty-two percent of the American population is Christian. Essential issues such as whether "under God" should be in the pledge of allegiance regularly figure in our political discussion. How long before people realize that our weekdays are named after pagan gods? When this linguistic levee bursts, we are going to have a serious problem.

Sunday is named after the Sun and Monday after the moon. Reasonable enough.

The Romans named the following day after Mars, the god of war, which is still reflected in the French mardi, Spanish martes, and Italian martedi. The Germanic god of war, Tyr, was apparently not the smartest of the heavenly masters, since he had his hand bitten off by a wolf after being gullible enough to stick it in the wolf's mouth. (The Icelandic runes just refer to him as the one-handed god.) Nonetheless, the Germans, who later called him Tiw, were kind enough to award him a day of the week. Paganism among Germanic people went out of fashion in about the eighth century, and they changed the name the more work-oriented Dienstag, meaning "day to serve." We, however, stuck with Tiw's day, which became our Tuesday.

Wednesday also takes a circuitous route from the Roman god Mercury, giving us the French mercredi and Spanish miércoles. The Germans called him Woden, and we continue to do so as Woden's day, shortened to Wednesday. (After the eighth century, the Germans changed it to the rather uncreative Mittwoch, "mid-week").

Continuing the planetary order – well, not exactly in the proper order – the Romans named the next day after Jupiter (Jove, as in "By Jove!"), giving us the French jeudi and Spanish jueves. We, by now unsurprisingly, continued with the Germanic name for Jupiter, Thor, giving us Thor's day, or Thursday. Thor is also the god of thunder. He strikes lightning with his mighty war hammer, Mjolnir, which returns magically when he throws it. Germans were reluctant to get completely rid of such a cool god, and therefore changed his day to Donners- tag, "thunder day."

Now the Romans jump to Venus-the goddess of love, even though, as Carl Sagan pointed out, Venus is the planet that most resembles hell in its actual climate. The Roman Venus day (French vendredi, Spanish viernes), seems to have little connection with our Friday. Until you realize that Freya was the Germanic love goddess. (The Germans changed it slightly from Freya's day to Freitag, "free day").

Finally we have-OK, quick question, which of the ancient planets has been left out? You can guess it by our English name for the last day of the week, Saturn. The ringed planet was the most distant one for the Romans. (Uranus and Neptune were not discovered until 1781 and 1846, respectively, after telescopes became available. And Pluto, as we know now, is not really a planet.) The Romans named the final weekday Saturnii dies, Saturn's day. Saturday and Sunday are the only two days that we have continued to name after Roman gods.

How do other languages compare? The Russians were quick to replace pagan names with distinctly secular ones. Monday is ponedelnik, which translates as "after do-nothing day." Tuesday is "second day," Wednesday is "middle day," Thursday is "fourth day," and Friday is "fifth day." The Jews, who know a thing or two about problems stemming from religious differences, have gone even further to give just a number to each of the first six days of the week. (Saturday translates as "the rest").

I'm pleased to present a solution to this problem even before anyone realizes it's a problem, and respectfully propose the following:

Sunnyday: A day to bask in the light of family, friends, and for spiritual (and spirited) celebration.

Moneyday: Time to get to work.

Truesday: The reality of the situation sinks in.

Wetsday: A typically rainy day, in weather, mood, or the day you should have saved for. As we know, "The Wednesday child is full of woe." Although, with global warming a rainy day is not such a bad thing and the Wetsday's child may be a fortunate one. For most people, however, this is still the toughest day of the week.

Turdsday: Things only get worse.

Flyday: Flies follow turds. But for most, this is the day to consider flight.

Sleepinday: The day to sleep in, recuperate, tidy up, and prepare for Sunnyday!

Paul Gahlinger, MD, PhD, is adjunct professor of medicine at the University of Utah. You can find him doing yoga at Centered City, or email pgahlinger@gmail.com.