The idea for a light art and technology festival in downtown Salt Lake had been brewing for about 20 years, says Derek Dyer, director of the Utah Arts Alliance. His vision was actualized November 10-11 with Illuminate. The inaugural festival drew around 12,000-15,000 visitors to downtown Salt Lake’s Regent Street, UMOCA and the Gateway for visual art, musical performance and dance. The Gateway was the hub of most of the activity. A mobile app guided guests to each art installation. Attendees were a good mix of families, groups of friends, couples on dates, and Burners. 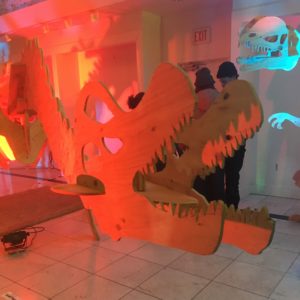 Vacant Gateway retail spaces housed many of the major installments One of the first rooms I stumbled upon featured huge wooden dinosaurs with different-colored well lights pointed on them. The dinosaurs look like giant replicas of old Fisher-Price toys; however, these ones were hand-carved. Being in this room brought me back to days spent watching Toy Story on my parents’ VCR, almost as if I had gotten too close to the TV and fallen in.

One of the more interesting interactive art pieces of the festival on the main strip of Rio Grande was an interactive projector screen that mimicked participants’ arm movements in various colors. I stood in front of the screen as directed bythe red tape on the ground. Then I could wave an arm about and the image on the screen moved with it. The images of abstract lines and moving shapes on the screen varied between slides that changed every minute. I was astounded by the amount of work and thought this artist had put into this project, because everything worked so precisely.

The main area of the festival was “The Lounge,” with a bar and several installations on the walls. With so many different types of art in this one room, every patron found something to enjoy. I was most drawn to one of the moving visuals on a wall just out of reach from the larger installments in the room.

The standalone installation was called “Flow,” made by Rick Walker, which looked like mist circled around a glowing orb in the middle of a giant rectangular screen. The colors constantly shifted, growing from warm tones to a bright rainbow. I probably stood in front of the piece for longer than was healthy for my eyes, but the effect was worth it. Afterward I felt as if I’d just witnessed the true goal if the Illuminate festival. 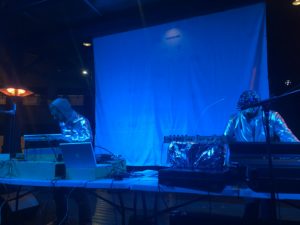 Back outside I was drawn to the Plaza stage. There, two men in metallic suits were setting up a table of synths. Right away, I knew this was going to be my kind of act. Not only are synthesizers my instrument of choice, but they really fit in with the futuristic vibe of Illuminate. After enough time for me to grab a cheese-filled hotdog from one of the food vendors, Conquer Monster started their set. The four different synths they were playing all converged together in a glorious wall of sound that inspired some audience members to get up and dance. Conquer Monster’s sound was perfect for me to exit the festival and head to the After-Glo Party in the Gateway’s Grand Hall.

One of the first things I noticed about the After-Glo party was how many performers there were, and how well UAA had set up this venue for a night of dancing and laughter. There were three pieces of art inside the party, a light-up floor for the aerialists, A.D.A.M. LED Art Wall by Tara Scape & Darren Gonzol (aka Skittish & Bus), and the ceiling projection mapping by David Giardinelli. Giadinelli’s map displayed images of a UFO right above the painting of pioneers in the Grand Hall of the old Depot Train Station, a humorous take on a serious piece of Utah’s history. The light projections created a great atmosphere, but as the night went on and more patrons and performers arrived, the sensory overload made me feel as though I needed to sit down and watch instead of participate. 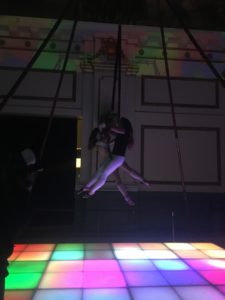 For the Illuminate Light Festival’s first year, I would say it was a success. There was accessible art, a space for children, good attendance, and a rocking after-party. For future Illuminate festivals, I would like to suggest utilizing the Gateway as the sole venue. My personal feeling was that it was too spread out among the three venues, and discouraged some from seeing the entire festival’s offerings because of the necessity to drive from venue to venue, especially in the colder month of November. I would have also liked to have seen more written description of the pieces where the artist wasn’t present, because I found myself wondering what inspired the artist, what materials were used and what the artist’s name was if I wanted to look at more of their work.

Regardless, I’m excited to see what the future is for this festival and how it grows into the atmosphere of Salt Lake’s culture.

This article was originally published on November 17, 2017.