Home is Where Your Human Is

If you go to the northwest corner of Pioneer Park at noon on any given Sunday, you’ll meet a small crew of extraordinary people performing an act of extraordinary kindness: They are handing out bags of pet food and treats and toys and leashes to homeless people who own dogs and cats. Welcome to the Legacy Initiative Pet Outreach.

The homeless are a very visible part of Salt Lake City. In recent years the summer Downtown Farmers Market and Twilight Concert schedule has disturbed the dubious peace of Pioneer Park. They’ve relocated to a block west for the season. Drive along 200 South between the Gateway and I-15 and turn south along 500 West, and you’ll find yourself in the middle of an encampment.

Along with their worldly belongings, they line both sides of the road and the grassy median. The Pet Outreach stakes out its corner of Pioneer Park at noon, but soon a small contingent walks out to the encampment with a wagon full of food bags.

“A lot of them don’t want to move from there,” says program director Margie Varela, “because they’ll lose their spot, or someone might steal their belongings.” 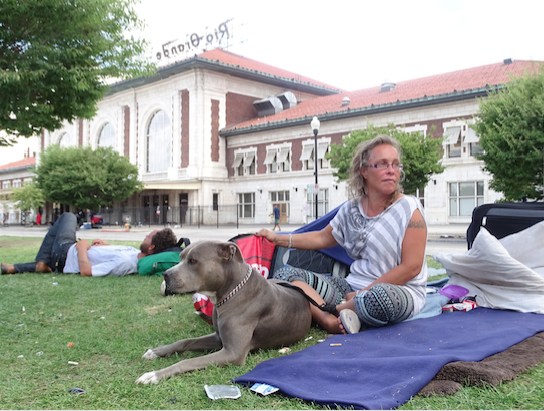 How can someone who doesn’t have a roof to sleep under keep a pet? Many of them do, and the life of a homeless person’s pet is not what you might think.

“The dogs are all very well socialized,” says Stan Stensrud, a volunteer with the Pet Outreach, as we walk through the 500 West encampment giving out bottles of water for the humans and bags full of provisions for the dogs. “They love the constant contact with people. They are outdoors all the time, running around and getting good exercise, there’s all these scents and smells—everything you could want as a dog! And their people just love them so much. It gives [their owners] responsibility, and someone that looks to them, and so much love. Having a pet can be a very important, very stabilizing thing for a homeless person.”

Rosie Handrahan, another regular volunteer, sometimes brings her kids with her to play fetch with some of the dogs. “They have so much energy!” she says, “the kids wear out before the dogs do!”

Secret Perkins organizes donations of pet food from a Walmart distribution center to the tune of one or two pallets a week, and is on point interacting with the homeless pet owners. Once she spots a person with a dog, she and her colleagues will walk over and introduce themselves, offering a bag of provisions for the animal and a little conversation for the owner, her half-sleeve tattoo of her own four dogs often providing a point of commonality.

Stan emphasizes how important it is for homeless people to connect on a human level: “There’s no judgment from us. Just a handshake or a friendly word, some sort of connection—that can be so key.” At the end, Secret will ask if the person minds having a picture taken with his or her pet, writing the person’s first name and the pet’s name on a small white board to be held in the photo. This visual record helps the Pet Outreach keep track of their clients, and they do have many repeat customers. One lady reports to Secret that her dog was confiscated and is now in a shelter. “We’ll make contact with the shelter and try to get her back,” Secret tells me.

Most of the pets are dogs, but there are a few cats, and odd outliers like the gentleman who stopped by at the park station and asked, “You got anything for a duck?” Program director Margie Varela doesn’t even blink. “If you come back next week, I’ll have something for your duck,” she promises.

Adventures of Lucky the Cat

A man named Michael and his orange tabby, Lucky, are what you might call local celebrities on the scene. “I’ve had Lucky six years, since he was a kitten,” Michael tells me. “There were these two construction workers taking bets on a pair of kittens that were in the road, which one was going to get killed first. I yelled at them, because they’re God’s creatures, you know? Then Lucky’s sister got squished, and Lucky got hit and I thought he was dead and I was walking away, but then I hear this ‘mew! mew!’ and I go back and he’s alive, but his eye got knocked out! He was so small he fit in my shirt pocket. But he stayed with me—his safe space is up on my shoulders.” 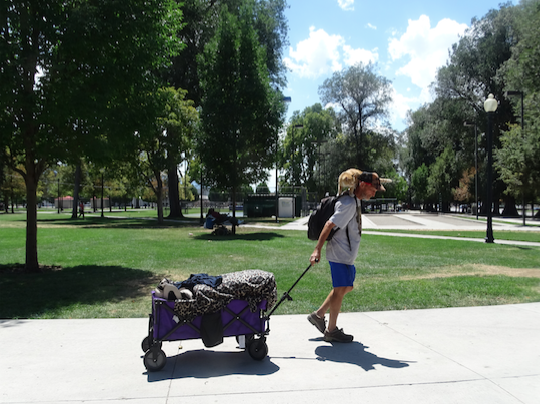 He’s frank about Lucky’s influence on his mental health. “He keeps me stable. He’s my service cat. Where he goes, I go, and he keeps me motivated.” Michael can’t go everywhere with Lucky, unfortunately—including the homeless shelters during the winter months. “They will sometimes let dogs, but they won’t let cats,” he tells me, “so we slept out all last winter.”

This is a big issue for the homeless who have pets. “The pets become a very important part of someone’s life, and that doesn’t change just because you don’t have a house,” says Kimo Pokini, the director of Legacy Initiative’s Development and Resource team. 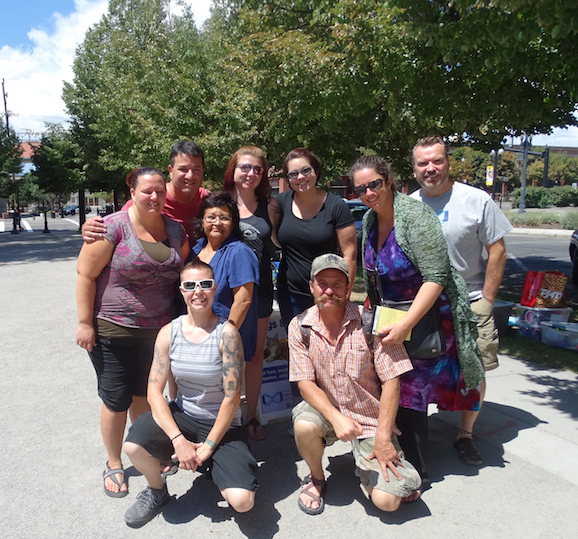 “The Pet Outreach really took off last winter—we stepped up our game in December and January. In general, homeless people with pets can’t go into shelters. There are some rooms available if you have a service animal, but the process of getting certified is expensive and difficult, and generally out of the reach of someone who’s homeless.” A service animal, distinct from a therapy pet or emotional support animal, costs $20,000 or more to train; there are applications, interviews, waiting lists and owner trainings. But even a certified Emotional Support Animal requires some money, a lot of coordination, and a permanent street address to register.

“If you have a pet, you’re basically deciding to live on the streets, even in January,” Kimo says. “We do what we can, and make sure we are loaded with pet coats and booties, and we’ll be stockpiling these all through the year so we have enough for winter.”

“We also found out there’s a problem with people staying in domestic abuse situations because they don’t want to leave their pets behind,” Stan tells me.

Is there any room for someone to create a combination homeless and pet shelter? “It will happen at some point,” he says. “We’re trying to investigate that some more. If we could get funding in that direction, that would be great.”

If you love animals and you’d really like to make an immediate positive difference in someone’s life, come volunteer with the Pet Outreach. If you can’t walk the encampment with them on a Sunday, the organization also provides provision bags for people to keep in their vehicles to distribute wherever they see a homeless person with a pet. It’s a small gesture that reaches across boundaries and brings us all, animal and human, closer together.

Alice Toler is a writer and artist. She lives in Sugar House with her husband Trent and their registered VSD (Very Silly Dog), Trinity.

Come by the Pioneer Park at noon next Sunday (northwest corner).

The Pet Outreach is organizing a team for October’s Strut Your Mutt event.

Join their “Street Dawg Crew” and raise money for the Legacy Initiative You can register as a network partner or donate: strutyourmutt. org/goto/TheLegacyInitiative2016

This article was originally published on September 1, 2016.