by Pax Rasmussen
Riding the bus could get cheaper
State legislation could offset fares with sales tax
UTA bus fares are already among the highest in the nation, and now with the recent fuel surcharges, they’ve gone up even higher. Fortunately for public transportation users, conversation is circulating about the possibility of state legislation in the upcoming session that would allow counties to slightly raise sales tax to reduce transit fares.
Rising fuel costs and decreased sales tax income due to the economic downturn has left UTA’s revenues smarting. In May, the UTA board voted unanimously to implement a surcharge, assessed on a quarterly basis, to offset rising fuel costs. Since July 1st, UTA has already added two fuel surcharges to the base fare. This has increased the basic fare by $.50, and another hike is scheduled for January 1st, bringing the cost of a one-way trip to $2.50. Most of UTA’s operating budget is covered by sales tax, so this legislation could significantly reduce fares.
Organizations initially interested in being a part of this effort include Post Carbon Salt Lake, Crossroads Urban Center, Salt Lake Bicycle Collective, and Physicians for a Healthy Environment.
For more information: Jean Arnold, 582-4148.
Get your commute on – waterproof Bike Bins make it easier 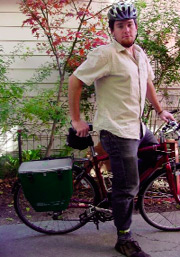 I first saw the Bike Bin at Wild Rose Mountain Sports, and immediately thought it was a pretty cool idea. I’ve been bike commuting all over town for about a year now, and by far the biggest challenges revolved around carrying stuff with me. The Bike Bin seemed like such a good idea because it promised to fix my two major concerns: 1) being able to leave things with the bike without worrying about them getting stolen and 2) the tendency for rain to seep through even the best bags, moistening my laptop, camera and books. I flinched at the $60 price tag, but after using it for a couple months now, I feel safe in saying it’s undoubtedly worth that price. The Bike Bin is sturdy, strong and waterproof, and has a nifty little lock on the lid (I use a 1/8 inch braided steel cable to lock the bin itself to my bike).

I’m in no way easy on my bike: I shred around, hopping curbs and periodically crashing (I still haven’t figured out how to keep my toe clips from interacting with my fenders), and the Bike Bin has withstood everything I’ve thrown at it. It’s well scratched and scuffed now, but hasn’t cracked and still seems, structurally, as good as new. Their website claims the plastic retains strength to -22 degrees, which I’ve yet to test. It’s good sized, too: To date, my biggest haul included six potatoes, two turnips, two onions, a pound of ground turkey, a head of cabbage, a two-liter bottle of ginger ale, a French baguette and a small jacket. The only drawback is also a benefit: It snaps on and off quickly and easily, and a couple of times the bin has come off the rack when I hit a particularly large bump. Just remember to make sure you push the clips all the way down when attaching it.
www.bikebins.com. Also available at Wild Rose Sports, 702 3rd Ave.
Idle Free Utah a success
Idle Free Utah successfully launched Phase 1 of its anti-idling campaign in September, with 64 elementary schools and a number of other organizations asking parents to turn off their engines while waiting for their children. So far, 20,000 drivers in Salt Lake Valley have agreed to reduce their idling, and have placed "Turn your key, be idle free" decals on their windshields to remind themselves and others of this pledge. Signs and decals are springing up throughout the valley, from UTA buses to the Airport waiting areas. If you wish to commit to saving gas and money, protecting your health, and preserving our blue sky by reducing your idling, you can pick up a windshield decal at any City or County library information desk. Idle Free Utah has a deficit of $540 for their next order of decals, and any help would be much appreciated.
www.idlefree.utah.gov, Renee.zollinger@slcgov.com, 535-7215
Green Building Center wins USEE_award
The Green Building Center, long a friend of CATALYST, has won the Utah Society for Environmental Education’s first Environmental Education Business Award. The Green Building Center (GBC) has an extensive product gallery that provides homeowners building materials that provide a safe, healthy, and environmentally sound home. GBC’s expert staff takes the time to educate themselves and the public on the benefits of green products, the installation of these products, and how these products will impact the health of your home and the environment. GBC also hosts informational workshops that educate the general public on the installation and use of the products they carry. They also work with contractors, architects, and engineers to move forward their agenda of creating sustainable communities along the Wasatch Front.
GBC:_www.greenbuildingcenter.net, 484-6278, 1952 E 2700 S.
USEE: www.usee.org, 328-1549

This article was originally published on November 3, 2008.