DIY Beer Tote for the Holidays.
—by Pax Rasmussen

Wondering what to get that special someone for Christmas this year—without resorting to a good suck on the ever-expanding, engorged teat of American consumerism? Also: are you broke?

My wife and I were facing just such a conundrum, and our solution not only saved us from a soul-sucking trip to the land of Chinese plastics, it also played on another of our (admittedly lackadaisical) pursuits: homebrewing.

We came across the idea of the wooden beer tote in one of those crap magazines that come unsolicited in the mail. Really cute idea: A couple of pieces of pine, a dowel and a few nails and you’ve got a charming, rustic way to bring along a six-pack of your Fat Tire clone to a party. But $29? Pshaw! We could make that for $5! Not only that, we could mass-produce them fairly easily, too. The perfect DIY xmas gift project!

I did a little Googling, and found someone had already whipped up some plans for these bad boys (http://thenewhobbyist.com, http://tinyurl.com/ woodbeertote for direct link to post). This dude was making them for his wedding, but hey, a good idea is a good idea. Adele and I ran down to the hardware store and grabbed a bunch of pine planks and got to work. 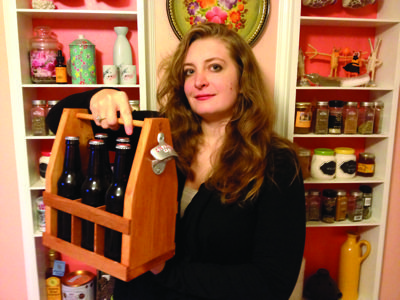 The prototype turned out really well, I think. If you’re into this idea, click here for a PDF with instructions and diagrams. My plans are very similar to the ones found on thenewhobbyist.com, but I’ve made some modifications. For example, I found I didn’t like how the side walls sat on top of the base—the tote would look better and be sturdier if the base fit between the side walls. I’ve modified the overall design accordingly.

The easiest (and least expensive) way to make these totes is to buy 1×6 pine planks. (They’re really ¾-inches thick by 5½ inches wide.)

The trickiest part is going to be cutting the slots halfway up the dividers (so they interlock). The best way to do this is with a router, but we used a ¼-inch dado on the table saw. We used a compound miter saw to make most of the other cuts, including the diagonals on the side walls, but this could be done as well with a steady hand and either a circular saw or a jigsaw.

We finished it off with a wall-mounted bottle opener from World Market—you can find a dozen different styles on Amazon (this one is $4: http://tinyurl.com/bottleopenerfortote).

Remember to wear safety glasses! (And drink your beer after completing your tote, not before!)