Green Beat: From Hives to Homebrew

The urban homestead of Jonathan and Julie Krausert. 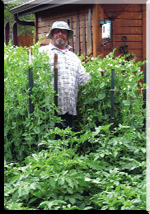 Jonathan and Julie Krausert’s house is hard to miss. Nestled deep inside Rose Park, surrounded by simple modern red brick homes with standard-issue lawns, the Krausert house is a gardener’s masterpiece. The front yard is a puzzle of garden plots fitted together with flagstone paths. Life vibrates from the ground up, even in these final days of winter when we visit. Seven medium-sized fruit trees call this yard their home, surrounded by a spread of tiny green leaves—three kinds of oregano, basil, mint and thyme. Onion greens join the push upward through the leaf litter mulch. Rosemary, currants and strawberries also make the list of edibles; and this is just the front yard.

The front yard is a puzzle of garden plots fitted together with flagstone paths. Life vibrates from the ground up, even in these final days of winter when we visit. Seven medium-sized fruit trees call this yard their home, surrounded by a spread of tiny green leaves—three kinds of oregano, basil, mint and thyme. Onion greens join the push upward through the leaf litter mulch. Rosemary, currants and strawberries also make the list of edibles; and this is just the front yard.

Jonathan approaches his work in the garden and at home with the attitude of an older generation whose values, once old-fashioned, are new again: Everything has a place and use; waste not, want not. For instance, an extensive water cachement system retrieves the rainwater that rolls off all of the roofs.

Raised in a family of farmers in Green Bay, Wisconsin, he learned by example. “My grandparents and great uncles and aunts lived through the Depression and World War II. They grew gardens and raised animals and were very conscious of their environment,” he says.

For Jonathan, providing for oneself through food production and other means is not just a hobby, it is a working-class way of life. In the days of his grandparents, he points out, it was the only way that it could be. But you can see in Jonathan that in addition to a dozen hobbies and a houseful of food, his urban homestead offers him the prospect of adventure in the microcosm of his own yard.

And as more people become interested in sustainability and connecting more intimately with a spot of Earth, people like Jonathan are becoming the elders, the bearers of hands-on wisdom.

Jonathan left his Wisconsin home 25 years ago on a hitchhiking trip that landed him in Salt Lake City, where he met and married his wife Julie. Jonathan held on to his working-class roots, finding work in construction. The job often provided materials for off-site projects and beautiful pieces of scrap wood became dining room tables, cabinets and bookcases in his own house. Now that Julie and Jonathan are both mostly retired (he still takes on some remodeling projects) the once part-time garden has become a more full-time operation. Most days, Julie prefers to direct her attention to projects in her new sewing and quilting room while out in the garden Jonathan makes the desert bloom.

Walking to his back yard (the gate and fence built entirely of recycled wood), we move into a space of preparation for spring. One garden bed along the garage shows healthy young garlic tops. “I planted those Labor Day weekend and I will harvest in June,” says Jonathan.

It is early March and still too early to plant. High-rise shelves of seedlings grow under lights indoors. More seedlings sprout from pots in the garage.

I notice the conical wire cages stacked along the west-facing fence. These contraptions are tomato cages on steroids. “We do bio-intensive gardening,” says Jonathan. “Everything goes up into the air.” Just like cities whose limited space requires the upward growth of skyscrapers, the modest size of Jonathan’s yard requires the same vertical movement. “Our tomatoes sometimes grow to 10 feet and I need a ladder to reach them,” he says. Besides maximizing production, this technique also grows a more beautiful product: “My vegetables ripen completely. This way, instead of having one yellow spot from the side that sits on the ground, the whole fruit ripens.”

Jonathan has other techniques for maximizing space. To begin with, he plants earlier than most people. It is only the first week of March and already the garden beds are turned and waiting. “In the next few weeks I will be planting peas, cabbage and onion,” he says. “We do two crops of everything except the slow growers like corn and tomatoes.” By July, when most people are just beginning to see the fruits of their labor, Jonathan will be moving on to phase two of planting. After the first crop, he says, “I will plant beets and new potatoes, probably some beans. I always plant every bed twice.”

{quotes}All this planting can start to sound tiring, and Jonathan admits that none of it is fail-proof even for him. But each mistake teaches something that can be done better next time. Jonathan quotes his grandfather: “If you are not learning, you might as well be dead.”{/quotes}

So far Jonathan’s tireless personality combined with his penchant for trying new things has turned this backyard garden into much more than just an urban grow box. Along the back fence, 11 hens chitter-chatter from their homemade coop. Proud of his handiwork, Jonathan gives a quick tour of their home. Connected to their open-air chicken run by a modified pet-door, the coop has a concrete floor for easy cleaning. The galvanized walls and door are foam-insulated and there is even a screen door to replace the solid one during the hot summer days. The coop, Jonathan brags, is better constructed for efficient heating, cooling and cleaning, than are most people’s houses.

The garage holds many more food-related projects. Stepping inside we are greeted by the chirping of this year’s chicks keeping warm in a brooder box on the table. Also on the table sits a two-foot-high green plastic box. The box is made of sections stacked on top of each other. Jonathan lifts the top cover. It is filled with kitchen vegetable scraps and worms. “These are our worm farms,” he announces. “By the time the worms are done you get a great soil amendment and,” he says, turning a spout at the bottom of the boxes, “worm tea.” A black, odorless liquid pours out into a jar. “This is a great nitrogen-rich fertilizer. But you have to be careful with it. I know people who have burned crops with this. You only need a quarter cup per gallon.”

Turning around we bump into a freezer filled with handmade sausages, frozen jams made by Julie and other frozen garden foods. In corners and on shelves around the freezer are drying racks, another method Jonathan uses for preservation of his garden harvest.

A tour of the solar drying racks, Jonathan’s own construction, leads us to the bee room. After years of serious gardening, Jonathan and Julie realized the valuable role of pollinators not only for gardening, but also for their seven fruit trees. They set up a hive and have been adding about one hive every year since then. They now have colonies around Salt Lake in the yards of neighbors and friends, with three more hives this year. Jonathan cares for each of these hives. “If the hives just sit in their yards I give them a couple of quarts of honey at the end of the year. If they actually help me harvest, I split the honey with them.”

While having bees isn’t necessarily difficult or time-consuming, the end of year honey harvest, he explains, is a lot of work. Each hive is normally composed of a stack of two or three boxes. Each box at the time of harvest can contain roughly four gallons of honey and weigh 80-90 pounds. Last year Jonathan harvested from his five hives 18 gallons of honey.

When the garden isn’t full, the cupboards, freezers and shelves are. Jonathan and Julie convert all of their food—from the trees to the hives—into preserved items. A look through their kitchen reveals homemade marinara sauce, barbeque sauce and ketchup. The bathroom shelves have soaps, lotions, balms and candles made over their stove with their own honey and bee’s wax. It is a reliable, independent cache that would make any Christian preparing for the Apocalypse green with envy (and we’d hope they’d even be thankful for the homebrew—made with homegrown hops, no less). It is also the epitome of what we now call a sustainable lifestyle. Jonathan remembers making soap with his grandmother and still makes his grandfather’s recipe for sauerkraut in the same crock his grandfather used. “Back then,” he reminds us, “it wasn’t sustainability; it was survival.”

Julie, however, wants to make sure that her husband’s passionate fervor for food-based self-reliance doesn’t scare other people away from home gardening. Even though Jonathan puts in hundreds of hours doesn’t mean that everyone has to do the same just to grow their own tomatoes. Even one potted plant, she suggests, is a healthy beginning.

Jonathan is frequently found on FaceBook (at least till planting season takes off), where his friends, photos, memberships and pages careen toward progressive politics and, of course, the broad topic of the garden. There, he describes himself as a teacher of self-sufficiency. It is a recent role that he has spent his life preparing for.

Though his Wisconsin farming roots make him at home in the garden, he admits that he never in a million years imagined himself as a teacher. But he became active in Wasatch Community Gardens (WCG), which hosts gardening classes for people of all ages. With five gardens in Salt Lake and Sandy, WCG provides urban dwellers space to grow their own food.

Together with Julie he teaches seasonal gardening classes for adults. This year they are offering a course on solar cooking and dehydrating, a container gardening class and a canning class to help people keep their garden glories long after the winter snows have begun to fall. He is also on WGC’s board of directors.

It’s curious to imagine what Jonathan’s grandfather would say if he saw his grandson today, exchanging the latest on bee diseases and cold-weather planting techniques with people contacted through a box on his desk and growing 10-foot-high tomatoes on his tiny city farm. It’s certain he would be happy to see that the skills of the farm live on and that Jonathan congenially shares his time-tested knowledge with others of all ages as they, too, explore a dozen hobbies, grow a houseful of food and discover the joy of adventuring in the microcosms of their own yards.

Katherine Pioli is a staff writer for CATALYST.