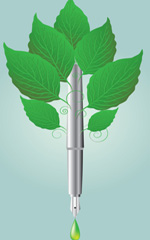 A collection of environmentally oriented tidbits: what works, what needs fixin’, how to cash in your clunker and a small essay about rail travel.

What Works: Getting around cheap and easy
SF Bay Area commuters beat the traffic and the tolls

It’s a revolutionary idea: casual carpooling. It’s unofficial, spontaneous, unregulated. And it’s highly effective. Each morning, thousands of people beat the notorious traffic of the San Francisco Bay Area, not to mention the tolls on the Bay Bridge, by hopping into cars with strangers and carpooling into the city. The drivers like it, too—they get into the city quicker as well. I’ve only been living in the Bay Area a couple months now, but that’s plenty long enough to say with confidence: Getting around during rush hour sucks. Except when you’re in the carpool lanes; they seldom even slow down.

Revolutionary, for sure, but not new. Casual carpooling has been popular in the Bay Area for over 30 years. The system is simple: Riders go to one of a couple dozen pickup locations around the greater Bay Area and just wait for a car to pull up. A couple passengers load into each car (three or more to use the carpool lane), and off they go. To keep things simple, all carpools terminate at Fremont and Mission in San Francisco, a block’s walk from BART or any other public transportation (getting around SF is easy without a car). The return trip is a little different—it’s hard to tell where any particular car is going, but people figure it out, or just use BART.

It’s safe, too. Over the years, an ad hoc set of etiquette guidelines has sprung up on the Casual Carpool website (www.ridenow.org/carpool), helping keep drivers and passengers civil. For example, riders are asked to let drivers initiate conversation, and female drivers are advised not to pick up two men if that makes them uncomfortable. The website also maintains a message board that participants use to let each other know about crazy drivers to avoid and hazardous conditions in general.

Would this work in Salt Lake? I know from experience that driving from the southern end of the valley, or from Davis/Weber counties, into Salt Lake in the morning can be taxing, at best. Salt Lakers know we have our fair share of traffic jams. It’s really a matter of critical mass. Do commuters hate the commute enough to get something like this going? Do Salt Lake Valley carpool lanes move people that much faster? As I remember, often traffic in the carpool lane crept along at only 5 MPH faster than surrounding vehicles. This may have something to do with the fact only two people per car are needed to use HOV (high occupancy vehicle) lanes in Utah.

Maybe casual carpooling is the next big thing, maybe not. But we know it works.

What Needs Fixin: Slow & Steady
Riding the rails from Oakland to SLC

Last year, GOOD magazine writer Ben Jervey rode an Amtrak train across the country to answer the question, Why is the American rail system still so unspeakably awful? In the article (www.good.is/post/ train-in-vain), published in their June 2008 issue, Jervey comes to a couple conclusions: the train is slow, unreliable and expensive.

Near the end of July, I hopped onboard an Amtrak train in Emeryville, Calif. (just five miles from where I’ve been living this summer in Oakland), bound for Salt Lake. Jervey’s article made the Amtrak experience sound like something of a transportation nightmare—so why did I decide to ride the rails to SLC?

Why not? I’ve yet to find a job in the Bay Area, so I’m really not very busy, and had no set time to be in Salt Lake, or to return. And I like a decent adventure, from time to time. Although Amtrak is often more expensive than flying, in my case, it wasn’t: just $68 one-way. And it was fun, in its way. Unlike on an airplane, Amtrak passengers can get out of their seats and mill about. There’s a dining car, a lounge and an observation deck. People hang out, chat, play cards.

Scenic, too: Crossing the Sierra Nevadas on a train was amazing. We crept slowly up steep grades high into the mountains, through tunnels and past lakes. From the foothills of the Sierras until Reno, a historical society volunteer made periodic announcements, detailing to passengers the sights out the window, putting them into context, weaving a story along the route.

Overall, I enjoyed the trip, but if I’d had somewhere to be or limited time in my schedule, it wouldn’t have been worth the $50 I saved by not flying.

Luckily, my trip didn’t go as badly as Jervey’s. His train was over eight hours late—mine a mere 56 minutes. It could have been much worse. In his article, Jervey retells stories of trains even days behind schedule. Amtrak shares the rails with freight companies, and often waits while long, slow trains do their thing. The trains are bulky, old and slow.

So why do people continue to ride? According to Jervey, nostalgia is a big motivator. People like the romance of a cross-country rail trip. Some folks are afraid to fly. I’m sure there are other reasons, but convenience isn’t one of them.

Perhaps the most interesting reason not to give up on train travel is energy economy. An Amtrak train uses half the energy of an airplane per passenger mile, and can carry twice as many people. The reason Amtrak tickets are so expensive is the lack of ridership—if the trains aren’t full, the price per person goes up. From a purely economic point of view, Amtrak should be a quarter the cost of an airline.

So, how does Amtrak build a ridership? It would help, for sure, if the trains got where they were going on time, and took less time to get there. Seventeen hours from the Bay Area to Salt Lake it tough to swallow for most people. Amtrak’s approach, until recently, has been to try to increase ridership through capitalizing on the mystique of train travel, and then to use that revenue to improve the system. This won’t work. Americans don’t tolerate much inconvenience.

Luckily, the Obama administration has plans to revamp the rail system as part of the economic stimulus act. The idea is to throw $8 billion at creating a network of 10 high-speed corridors across the country. With the rising cost of fuel, I can’t think of a better way to improve our transportation system than investing in an option that uses a quarter of the energy as air travel.

Building green is all well and good, but what about everything out there that’s already up and running—and wasting energy every day? Easy: Retrofit! Last month, Obama administration officials from the Departments of Transportation, Housing and Urban Development, Veterans Affairs and other offices announced various weatherization and retrofitting projects around the nation. By retrofitting and improving American buildings to waste less energy, we can save Americans billions of dollars in energy costs. At the same time, we can create jobs and reduce the strain on our nation’s power grid. Reducing the load on our coal-fired power plants would, in turn, cut air pollution—letting our kids and seniors breathe a little easier,? said Van Jones, Special Advisor for Green Jobs at the White House Council on Environmental Quality (CEQ). The money is coming from the American Recovery and Reinvestment Act and, according to Jones, will both save money through greater efficiency as well as create jobs, stimulating local economies.

Double Your Rebate
Utah to receive up to $2.62M for rebate program encouraging energy efficient appliances

CATALYST readers probably already know that the next thing to do after buying an Energy Star certified appliance (refrigerators, water heaters, furnaces, etc.) is to send out the rebate application to Questar or Rocky Mountain Power (if you don’t know about these rebates, check out: www.thermwise.com and www.homeenergysavings.net/utah/home). Now, the feds are giving Utah a couple million dollars, as part of the American Reinvestment and Recovery Act, to make it even more worth the effort. The program isn’t up and running yet, but according to William Chatwin, energy efficiency coordinator for the state energy program, the gears are in motion and soon Utahns will be able to get two rebates for energy efficient appliances. The federal rebate applies to the cost of the appliance after the utility rebate has been deducted.

Ditch your clunker—get a hybrid
U.S. Department of Transportation kicks off CARS program

Last month, Transportation Secretary Ray LaHood announced the Car Allowance Rebate System (CARS), commonly called Cash for Clunkers. The buyer incentive is to help people buy new fuel-efficient vehicles and to boost the economy. The rebate works as a trade-in at the dealership, and applies to vehicles less than 25 years old that get less than 18 miles per gallon. Rebates are for $3,500-4,500.

Few people now doubt the reality of global warming, but few have a good sense of what it means, or how much trouble we’re actually in. NASA climatologist James Hansen claims that if we let the amount of carbon in the atmosphere rise above 350 parts per million, Earth will be unlike anything ‘similar to the one on which civilization developed and to which life on earth adapted.? According to 350.org, we’re already past that number—we’re at 390 parts per million, which is why the Arctic is melting, why drought is spreading across the planet, why people are already dying from diseases like dengue fever and malaria occurring in places where they’ve never been seen before.

In response, 350.org is organizing an international day of climate action, to take place this October 24. The goal is to spark local grassroots organized events on that day, to raise awareness of the important 350 parts per million goal. 350.org is an international campaign dedicated to building a movement to unite the world around solutions to the climate crisis—the solutions that justice demand.? Keep an eye in upcoming issues of CATALYST for more details on local participation.

www.350.org/invitation. Check out their language-independent video explaining the concept of the organization: www.youtube.com/watch?v=s5kg1oOq9tY.

Pax Rasmussen writes and edits for CATALYST from his desk in chilly Oakland, Calif.