One white woman’s experience with gospel music. Come for the concert, but be forewarned: You may come back for rehersals.
by Beth Wolfer 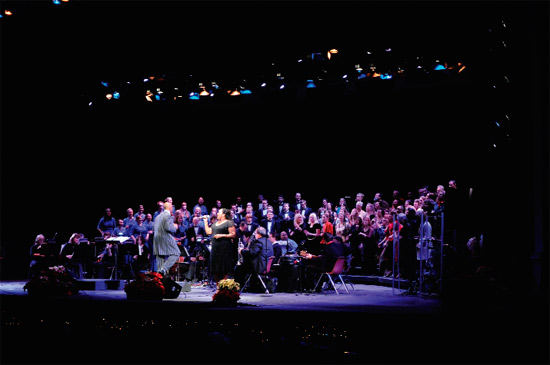 Man, if I could do something like this, I’d start singing again," I shouted over the crowd toward my friend Becky, tears streaming down my face. My hands stung from clapping, the hair at the back of my neck stood up. The crowd roared, stomped, clapped, laughed, heaved a heavy collective, happy sigh as the choir made its way from the theater’s aisles back up onto the stage.

In a year of extreme loss, a year of when-it-rains-it-pours, I’d felt little joy, let alone two continuous hours of sheer, unabashed elation. I’d lost my mother to Alzheimer’s, my house to fire, my temporary mobility to back injury, and my sense of professional worth to an untenable work situation, and my friend had taken me out two weeks before Christmas to "cheer me up." The music had replenished me, in spite of a lackadaisical, flabby spiritual life I’d fallen into. Apathy ruled, more than deep conviction or pious disregard, but I hadn’t realized just how empty I had become.

Nine months later, taking me at my word, Becky called to tell me we’d be joining the Community Gospel Choir for rehearsals to prepare Messiah: A Community Celebration.

This is not a piece of music, not merely a nice holiday pastime. Messiah: A Community Celebration is a phenomenon, a force of nature, an amalgamation of song, spirit, out-of-the-box, refreshing unconventionalism mixed with traditional, classical Handel.

It starts with rehearsals. Most Monday nights, from October through early December, 75 very unique people gather in the choir room at Salt Lake Community College to begin the process of building this experience. Under the direction of eminent local, regional and nationally-renowned choir master (and former Platters member) B. Murphy, we sing, we sway, we smile, we connect. There is no written music; B. doesn’t believe in it, partly because, despite having directed choirs for over 40 years, held a professional singing career and traveled the world, musically, he can’t read a note. People learn by listening, by being there, by participating, he says; and it works.

Usually, when we think of gospel music, we think of African American religious congregations, like the venerable local Calvary Baptist Choir or the internationally-renowned Blind Boys of Alabama. The overriding impression is that this is Black Music.

Whether as a choir member or someone sitting in the audience of this particular production, I am struck by the unspoken meaning, the depth – regardless of one’s religious affiliation or motivation for being there.

There is a sense of awe, of inexplicable possibility.

Who would have guessed that in mostly homogenous, Caucasian, middle class, LDS Utah there would be a gospel choir so diverse, so heterogeneous?

Our singing skills vary, too, including some professionals. B. says that as long as people are able to sing, committed to the process and moved by the message, they are welcome to sign on.

Under B.’s influence, what we have in common is the immense exuberance we feel both during and after each rehearsal and performance. At the end of every rehearsal, we find ourselves standing, clasping hands, singing the theme song of the entire three-month process: "Reach out and touch…somebody’s hand… make this world a better place…if you can." Words my singing companions have used to describe this experience: "magical," "connected," "grateful," "blessed." The director’s favorite part is the process and the joy of creating beautiful music full of the Spirit together – and the hope that audience members leave uplifted.

Salt Lake Community College’s group, which sings the traditional choral pieces, is made up of the school’s combined choruses. Dressed in classic choral garb, tuxedos and gowns, they present a sharp, unified, professional appearance and a crisp, uplifting sound.

Weaving the gospel and classical threads together are narrations by leaders from various faith traditions, the college, local dignitaries and politicians. Producers and artistic directors make a few changes each year, to keep the production fresh, alive and compelling to those who return year after year.

Handel’s Messiah has been sung at both Christmas and Easter for centuries. Written, it is said, in a 24-day period in 1741, the story describes the birth, life, death and resurrection of Jesus. Neither sleeping nor eating, George Frederic Handel is said to have seen "the face of God" while composing his masterpiece. He was supposedly depressed, in debt, and recovering from a stroke, making his efforts all the more miraculous.

Divided into three parts which address specific events in the life of Christ, the work was subjected to centuries of classical adaptation, church involvement and productions ranging from the blustery to the quaint.

Enter, in 1992, Messiah: A Soulful Celebration, a production by the legendary Quincy Jones. Al Jarreau, Patty Austin, Stevie Wonder and others put a fresh and exciting twist on Messiah. The story was the same, the presentation was decidedly not, and a new generation of listeners began to appreciate the ancient story in a new way. The gospel selections from Messiah: A Community Celebration are derived from this production.

Sticklers for historical accuracy might not enjoy the liberties taken by this interpretation, not the least of which is that the show ends with Hallelujah (often mistakenly called the "Hallelujah Chorus"). Those who know Handel’s work well realize that the Messiah’s most famous chorus actually takes place about two-thirds of the way through. But for Messiah: A Community Celebration to end with anything but Hallelujah would be a gigantic letdown to those who walk out of the theater humming those famous strains.

Some say gospel music began as a form of communication between slaves in Africa. That theorgy gained strength and popularity in early 20th century America. But others say gospel’s roots hail from Europe in pre-American days and morphed into the music sung by predominantly white Southern Gospel artists, including a young Elvis Presley. Who knows? Perhaps gospel was more instrumental than we know in the early roots of segregation. But as far as this country has come in the civil rights movement, "the most segregated time period of the week in this country remains 11 a.m. to 1 p.m on Sundays," someone said to me recently. In large part, whites and blacks continue to celebrate their faith traditions "amongst their own."

In Utah, gospel music is most prevalent in African American congregations such as Calvary Baptist and First Baptist. In the mid-1990s, however, a gospel choir formed in Park City. This tight-knit group broke the choral-singing mold, excelled vocally and created moving spiritual music together for several years, even taking their message on the road. "They were a breath of fresh air," said B., who helped organize the group. "People need to be given permission to participate and to express themselves, and this group led the way in broadening gospel music both to singers and to audiences in this state."

In 2002, Grand Theatre executive and artistic director Richard Scott sought something different for the holiday season at the Grand. He approached B. Murphy and Deron Hutchinson, who gathered many of their Park City gospel faithful, members of the Golden Voices Gospel Ensemble, as well as several local church choir members to form the Community Gospel Choir.

Messiah: A Community Celebration is a far cry from the Utah Symphony’s Sing-It-Yourself Messiah at Abravenal Hall, which I participated in for several years. The Community Celebration comes with permission (if you choose) to move, clap, sway, stomp and yes, toward the end, to sing along. Whatever your religious affiliation or motivation – or lack thereof – whatever you’re going through in your life, good, bad or indifferent – this production will move you.