One of our geese — the youngest; we called her “Goose” — had an untimely and yet strangely timely date with her maker yesterday.

Allow me to explain.

We planned all along to harvest two of our geese to serve as the centerpieces of our holiday feasts. And anyway, four goose mouths are too many and too loud.

As we mentioned in one of our first blogs, we were inspired to get geese by Sir Arthur Conan Doyle’s story, “The Adventure of the Blue Carbuncle.” It’s basically the Sherlock Holmes Christmas story. In it, the world’s first and most famous consulting detective unravels the mystery surrounding a goose that carried an unusual holiday gift in its crop: an especially rare and valuable gemstone.

We were delighted by the idea of growing and harvesting our own holiday goose, in the fine English tradition, despite the fact that neither of our family trees have — as far as we know — any English branches.

During the day, I masquerade as a producer of KUER’s RadioWest program, and last week we put on a live radio drama performance of “The Blue Carbuncle,” with Doug Fabrizio starring as Sherlock. So it seemed somehow timely that we harvest our geese as that story came around again.

Little Goose’s demise was also untimely. Months late, in fact. I was flipping through a book on raising backyard livestock and poultry recently and read that geese are often harvested in the fall, October or November. By then, spring geese are full grown and their adult feathers have come in, meaning they’re not covered in hard-to-pluck pin feathers.

We were surprised to find that these American Buff geese dress out very cleanly, leaving a soft, palely-colored carcass that meets the visual standards Americans typically expect of table poultry.

We fretted a bit about which goose would be the first to go. To the best of our knowledge, we have (or had) three geese and one gander. We’re certain that the Protestor is a gander. We’ve followed his maturation since he had his gender-identifying band on as a gosling. He’s clearly the largest bird, and the others always follow his lead. Then there’s the Hisser, the second largest bird and the only one who hisses, who we assume is a goose. She’s followed in size by another goose we’ve never named. Goose was the smallest of the flock.

We read somewhere that geese mate monogamously for life, so once we had a good idea of the birds’ genders, the plan, as I said above, was to kill two geese and keep a breeding pair. It was a hard decision, but we chose the Hisser to mate with the Protestor, based largely on her size. We’re always hoping that her rather aggressive nature means she’ll be a protective mother. And but so yeah, I just read on a poultry forum, that a gander can mate with multiple geese, which would give us more goslings to spread around come spring.

It looks like we might have to name the lucky goose whose life has been spontaneously spared this year. It’s a Christmas miracle she’ll never be able to appreciate.

In other news, the ducks are laying eggs with impressive regularity. The hens took to nesting beneath a pile of dried out Christmas trees Katherine and our old roommates collected from around the neighborhood last year. They seemed to like how sheltered and dry it was under there, but it was difficult to root through the dry needles and branches to collect their eggs. To make our task easier, I built them a laybox by taking an old milk crate, covering it in pine branches and laying down some nesting material for them to settle onto.

The ducks were intrigued by the new addition to their pen. I watched them gather to inspect it after I backed off. They quacked in low, short tones to each other in what sounded to me like approval, but they didn’t take to it initially.

My grandfather used to put decoy eggs made of wood in his chicken coop to encourage his hens to lay. I’m not half the woodworker my grandfather was. To encourage the quackers to use their new lay box I marked an old duck egg with a Sharpie so we can distinguish it from newer eggs and and I laid that egg in the box. Now we’re pulling one to two eggs from the nest a day!

We have a couple steady egg customers now. One lady we sell to says her kids think the duck eggs have a slightly weird taste, so she uses them in her baking, with great results. We’ve never met her children, but our guess is that their aversion is mostly psychosomatic. Yesterday I gave a half-dozen duck eggs to a prominent local chef to experiment with. If all goes as planned, we’ll be providing his restaurant duck, chicken and perhaps quail eggs in the future! 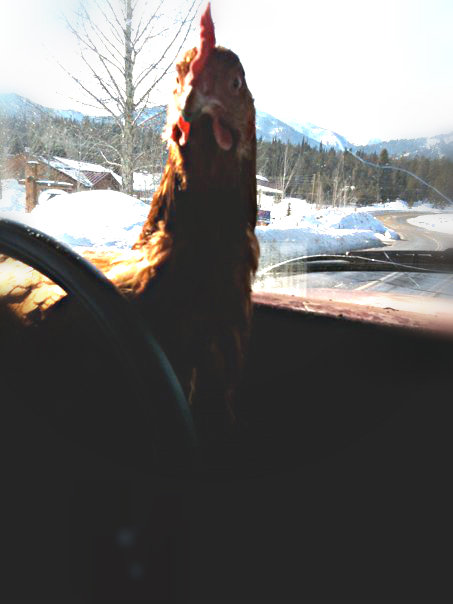 In more and other news, one of our first hens, my favorite of all our poultry, passed away last week. Little Red was the spunkiest, friendliest, lovable gal and the most reliable layer we’ve ever had. She also held her own at the helm of a 1975 Ford F150.

This article was originally published on December 24, 2012.