Good Grief: After 20 years, OR show moves to Denver

No I don’t mean, good grief, they’re gone! I want to talk about the type of grief for good. Because the kind of grief that you don’t make something good out of is just a drag.

As I walked home from the Public Lands March last Thursday, I would like to say I was filled with determination and pride for the outdoor industry’s commitment to public lands, or that I felt the love from the march that was supposed to be a show of OR’s gratitude to Salt Lake City for hosting the trade show for 22 years. I would also like to say that I really felt like I was making a difference with all 3,000 others who showed up that day, July 27, weeks after OR had already signed a 5 year contract with Denver, and Herbert hadn’t budged on his stance on Bears Ears, but I was distracted by a nagging feeling, a feeling I didn’t really want to deal with or make time for, the emotion of grief.

Grief over why the outdoor industry couldn’t stay and fight just a bit longer when we needed them most: Bears Ears and Escalante are still in jeopardy. Grief that a $45 million bargaining chip for Utah’s fight against the sale of public lands to energy development, was just taken off the table. Grief that Utah’s service and hospitality businesses won’t be seeing OR’s boost every January and July for as many years as it takes for either Herbert or whomever else comes after him to get their heads out of their oil and coal money-pampered asses.

In reading “The River of Grief and the Healing of Our World” that Erin Geesemen Rabke recently shared in her blog, she reminds us that grief is a necessary part of healing our world. Yet nobody, not even her, nor do I, want to start a conversation about it. Nonetheless, it’s important.

Rabke cites a part of Wendell Berry’s poem, “Their eyes having grieved all grief were clear.” Really though, this story will make a lot more sense if you read Rabke’s post.

The message I got from her post: Grief can be turned into something positive. But you first need to give it its moment, and acknowledge it for what it is. Grief, as much as others don’t want to talk about it, is essential in honoring aspects of our lives, and letting them flow.

Rabke also quotes Francis Weller, “The task of a mature human being is to hold grief in one hand and gratitude in the other and allow yourself to be stretched large by them.”

Although I’m deeply grateful for OR, I was also deeply saddened by the mutual decision with Outdoor Retailer, OIA, and several other leading brands in the industry to pull the show out of Utah after an unsuccessful attempt to negotiate on a conference call with Governor Herbert in February.

Blake Spalding, the owner of Hell’s Backbone Grill, a restaurant in Boulder Utah, who’s business was made possible by the national monument designation of Grand Staircase Escalante, spoke on the hillside of the Capitol building at the march. “I don’t blame you for leaving,” she said to the OR crowd, “Utah needs a dose of some strong medicine.” The strong medicine she was referring to is the economic void that the $45 million show each year brought to the state. But the problem that I fear is, that those millions won’t hurt Herbert one bit, all he cares about is the money that is funding his campaigns. Cough, cough: companies tied up in nonrenewable energy investments who want our public lands for a quick buck.

I feel grief for those Utahns, myself included, who continue to suffer on behalf of selfish decisions by Herbert. It’s been one thing after another: air quality, our public lands, now the outdoor gear industry-fueled spike in revenues. 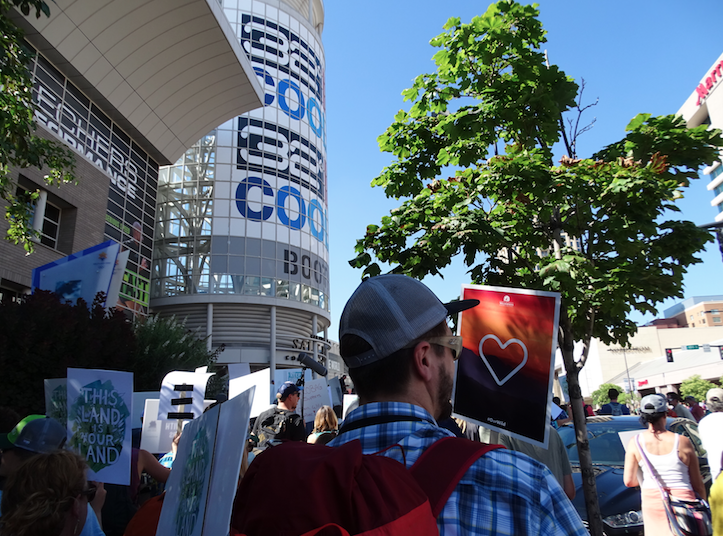 “This is kind of sad,” whispered one of my friends to me on the steps of the capitol on Thursday. She was talking about the grief too, but was also kind of laughing at the spectacle in a bittersweet way: a mostly white crowd, segregated by groups of employees from various outdoor apparel companies, holding signs about public lands in the most top notch, hip outdoor gear you could dream of. My outdoor gear wish list grew more that day than it has all year long.

I even felt grief over my ever-lacking gear pile and fancy moisture wicking, dri fit, stretchy, expensive outdoor apparel. I wanted that spiffy Patagonia backpack that was marching in front of me all the way to capitol hill. And I began to resent this group of people whose lives wouldn’t change in response to the handling of Utah’s public lands, who planned to pack up and just head for easier days in Colorado. I began to resent Colorado: Colorado doesn’t need OR, Utah, does.

But I can’t get mad them for doing what was best for them as the result of a frustrating battle with Utah’s representatives. I can’t get mad at them for being better outfitted than myself either. I also can’t get mad at a neighboring state whose government officials care more about public lands. And most of all I can’t let Herbert and all of Utah’s conservative representatives decisions cause me to turn against my own people, who potentially have the power in numbers to make change happen. But I can call out to them to hold them to their support of public lands. I can create a forum for grief and what good we’re going to do with it in response to these complex feelings in complex times. As Rabke reminds in her story about grief, grief is part sadness, part celebration. So I celebrate the years of excitement that OR brought to SLC’s downtown scene.

I celebrate the activists that arise out of this grief. I celebrate those who will continue fighting harder after this march.

A friend, Katie Boué, is one of them. She is a climber, activist, social media strategist, ambassador for Cotopaxi, and the face of many other brands doing good. She also used to work for OIA, and moved to Utah partially because of OR about a year ago. “Utah may have gotten rid of OR, but it didn’t get rid of me,” she says.

We may have lost OR, but we gained a savvy young person who can amass great amounts of social media influence by her passion and enthusiasm for the outdoors. She was one of the many climbers who went to Washington D.C. in May to lobby the hill on environmental issues. Her big win of the trip was getting a historically conservative Senator to join an environmental caucus after meeting him. “The outdoors is a bipartisan issue,” she reminds me.

I want to believe the GOP representatives don’t want to be disliked, especially the ones who tune into social media. Sometimes public attention on social media speaks louder than money or career goals. Look at Jason Chaffetz: earlier this year he rescinded a bill he passed that pissed off hunters and anglers, which brought on an onslaught of Instagram jabs and pleas. And now he has resigned, he stated due to wanting to spend more time with his family.

In this I find the good: we are all still human, and respond to public outcry (if it can be louder than money). Not to mention how the public lands issue has united two very different groups in the outdoor industry: extreme sports enthusiasts and sportsmen (hunters and anglers) over their shared desire: to keep public lands in public hands.

I believe that in any part of grief, there is some good to find. If we can accept and welcome our grief, and sow it into something good together, I think we’ll make some progress.

This is not the complete story. I only have so much to share. I’m not here to be the storyteller. This is where you come in.

I hope this grief can fuel our collective voices. I hope this grief can do some good. I invite you to join me on a new series: Good Grief. This is a new forum, a river, if you will, for your grief related to the environment and politics. Write to me (sophie[at]catalystmagazine.net) about your grief about environmental issues. I invite you into this weekly sounding board. Let’s find a way to yell about what we need to yell about (respectfully), cry about what we need to cry about, and find the silver lining where we can, and galvanize that.

Because otherwise it would just be a drag.

Sophie is the daughter of John deJong, Associate Publisher of CATALYST. He also used to author a column called “Don’t Get Me Started” for over a decade. Since the Trump administration, he retired his column. I guess there was too much to get started about. Now he writes about books and his long walks in “Walking and talking with John.” Sophie finds herself getting started about a whole lot too these days, and thought about a “Don’t Get Me Started Jr.” column. In that effort, Good Grief emerged. For now we’ll talk about grief, and discover the good that can come from it.

This article was originally published on August 3, 2017.