Glimpse of an Awakening New World

On September 15, I welcomed my new grandchild into the world. As I gazed into his eyes, which seemed to focus on some other mysterious plane, the last vestiges of my denial about the future of our world, the world he had just entered, shattered. In spite of the noble efforts of many wonderful caring individuals, humanity is not coming close to making the fundamental changes necessary to save Earth from rising temperatures, melting glaciers, dying forests, rampaging wildfires, extreme weather events and the extinction of countless species.

We have been insane enough to ignore the increasing number of scientists who publicly acknowledge the approaching irreversible threshold of climate change. We have lost our deep sense of being part of a sacred living cosmos. Looking at my grandson, I felt all of these realities no longer separate and outside of me but acutely within my heart.

The necessity of breaking out of denial as the beginning step toward healing addictive patterns is universally acknowledged in countless stories of recovery. How, then, can we break out of climate change denial and begin a global healing and transformative journey?

I believe some critical components to the answer to this question can be found in Naomi Klein’s critically acclaimed new book, This Changes Everything. Klein writes, “…the thing about a crisis this big, this all-encompassing, is that it changes everything…. One of the reasons climate change is so deeply frightening [is] because to confront this crisis truthfully is to confront ourselves—to reckon…with our vulnerability to the elements.” 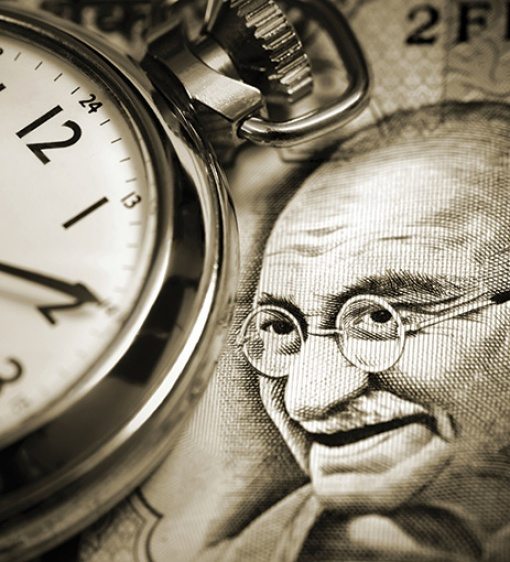 Only mass social movements, she argues, like the civil rights movements of the past, which changed for entire societies the sense of what was possible, can save us now. While we should acknowledge that the visions of social movements —led by people like Mahatma Gandhi, Martin Luther King Jr., and Nelson Mandela—have not been completely fulfilled, they certainly changed the course of history for the better. Are we capable of similar change now?

In 1983, I had a chance to visit with Dr. Paul Ehrlich just after his book Extinct­ion: The Cause and Consequences of the Disappearance of Species had been released. I asked him if he thought there was any hope of preventing a mass catastrophe. I have never forgotten what he told me. “We need a quasi-spiritual revolution, similar to what Gandhi accomplished in India in order to save this planet.”

How did Gandhi start a nonviolent revolution that not only liberated India from the most powerful nation on Earth but inspired the likes of Martin Luther King Jr., Cesar Chavez, Joanna Macy, the Dalai Lama, Thich Nhat Hanh, Desmond Tutu and so many other social activists? I think Thomas Merton, whom Pope Francis expressed his admiration for in his recent address to the Joint Session of the U.S. Congress, gave an illuminating answer in his book, Gandhi On Non-Violence. Gandhi, wrote Merton, “realized that the people of India were awakening in him. The masses who had been totally silent for thousands of years now found voice in him….But the message [was] not for India alone. It was for the entire world. Hence Gandhi’s message [represented] the awakening of a new world.”

When our hearts break open deeply enough, as mine did upon the birth of my grandson, the world with all of its joys and sorrows enters and becomes part of our very being. We realize we are capable of awakening a new world and we discover as Gandhi did that “there is a force in the universe, which, if we permit it, will flow through us and produce miraculous results.”

Gandhi demonstrated the power of these teachings to transform the world as no one else has in modern history. Gandhi demonstrated that this love is not passive; it stands courageously to protect the humblest and most downtrodden of beings. At this time those beings are our children, grandchildren and future generations of countless other species. When we allow our hearts to break open, we can discover the love and courage necessary to liberate ourselves from collective denial.

This awakening is already in its early birthing stage. The emerging global climate justice movement 350.org is a leader of this awakening. Of the United Nations Climate Change Conference in Paris, France November 30 through December 11, 360.org writes, “We want to have the last word as the climate talks conclude and we’ll get it by speaking in the language of movements: by putting tens of thousands of people into the streets of Paris and making sure business as usual cannot proceed as long as world governments fail to do what’s needed. If enough people agree that it’s time for the world to move in a new direction, and push together, the world will begin to move.”

Tuesday, November 10
Award-winning journalist and author Naomi Klein will be the feature Tanner Lecture speaker at Salt Lake Community College. Klein’s works such as The Shock Doctrine and This Changes Everything, along with her long career as a journalist and columnist, will fuel the kind of Tanner Lecture experience that has made the series a sought-after event for the community.
7-8:30pm. SLCC Grand Theatre, 1575 S. State St. Free.
Tuesday, November 17
On Tuesday, November 17, the Federal Bureau of Land Manage­ment (BLM) is putting on auction nearly 74,000 acres of Utah public lands for more exploratory oil and gas drilling. According to 350.org, we already have five times more known fossil fuel reserves than can safely be burned if we wish to avoid global average temperatures rising above two degrees centigrade.
Gather in front of the BLM offices, 3 Gateway Bldg, 440 West 200 South, at 8:30 a.m. People are encouraged to bring pictures of their children or grandchildren.

Vaughn Lovejoy was project coordinator of TreeUtah for 20 years. He is now retired and lives at Wasatch Commons Cohousing Community.

This article was originally published on October 31, 2015.