Getting to Zero Carbon

Thinking of solar panels and an e-car? First, work on reducing the amount of electricity you use.

There’s one campaign promise Donald Trump may end up keeping. But it’s not his promise, and it will probably infruriate his biggest climate change-denying backers. It’s Hillary Clinton’s promise to install half a billion (500,000,000) solar panels in America by 2020, at the end of what, technically speakng, should be her first term.

The scary part about Clinton’s promise, if you are in the fossil fuel business, is that half a billion solar panels could produce a third of America’s electricity production. That means that the sunken capital invested in coal mines, oil wells and fossil fuel power plants will go up in smoke, so to speak.

That promise might be one of the biggest reasons she lost. That promise, among others, prompted an outpouring of campaign contributions from the Koch brothers and their co-conspirators to the tune of $800 million in the 2016 election cycle.

Half a billion solar panels may seem like a lot, but when you consider that there are nearly a third of a billion people in the United States, that’s only one and a half solar panels per person. If only one in five houses installs their own solar system, we’ll get half way to Clinton’s goal. Another 25,000 utility-scale photo-voltaic solar systems of 50 megawatts could provide the other half.

In 2014 the United States consumed three trillion, nine hundred and thirteen billion kilowatt hours of electricity. For you zero freaks that’s 3,913,000,000,000 kilowatt hours, or about 12,077 kWh for every man, woman and child. That’s like each of us running a 1,500-watt hairdryer 24/365 (see accompanying chart). If that electricity is produced from coal, the carbon footprint is 24,154 pounds of carbon dioxide for each person. The footprint is about half that if it’s produced with natural gas. Still, that’s six tons a year. The upside of all the fracking going on is a glut of natural gas that has reduced its price. This has done more to sink the coal industry than pollution regulations or renewable energy sources. Natural gas may be the quickest way to finish off the coal-fired electricity sector. From a global warming point of view, that’s a very good thing.

But we can’t stop there. We don’t have much time. The latest news reports from Greenland and the Antarctic aren’t good, presaging apocalyptic reductions in the icecaps. New studies firm up the already solid evidence of global warming and have begun to tease out possible features of the future.

Deniers have done science a service by making sure that every possible explanation for global warming has been explored. The bad news is that the cause is still anthropogenic and too many Americans are in the anthro-denial stage.

The scariest new global warming science deals with the tipping points of various oceanic systems. A major concern is the possible shutdown or slowdown of the Atlantic Meridional Overturning Circulation (AMOC). One effect of a slowing AMOC is an increase in average wind speeds of 10-20%. This can increase the severity of storms by 1.4-2 times. Texas, are you listening?

Another possibility is the accelerated release of vast amounts of frozen methane at the bottom of the oceans. Methane is 84 times as powerful as carbon dioxide as a greenhouse gas. Quaintly known as the clathrate gun hypothesis, the mechanism may have been the precipitating event for the Permian-Triassic Extinction Event, 251 million years ago, the great dying, when 95% of all species became extinct. Aquatic species repopulated quickly, but it took 30 million years for life on land to recover. A sobering thought. 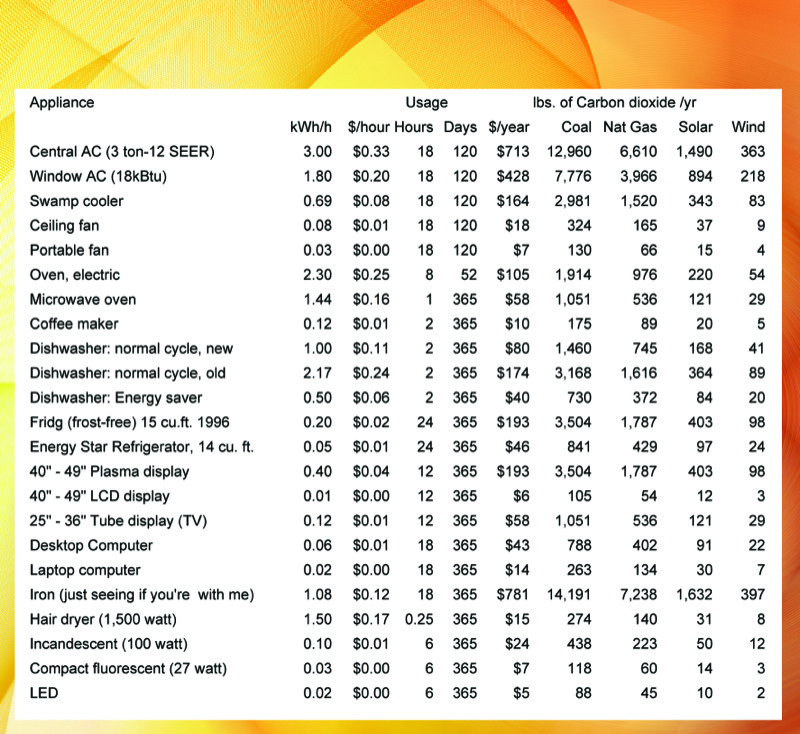 Those numbers are changing by the minute. In the late 1980s, coal accounted for about 57% of our electricity. In 2008 it was down to 48% and declined precipitously to 30.4% in 2016. In 2016 the installed cost of solar electric fell below that of coal-fired power plants.

The conversion to natural gas and solar for electricity generation is proceeding so quickly that it’s possible the last coal-fired power plant in the United States has already been built. But we are still using a lot of fossil fuel for electricity.

What are we doing with all that electricity? Half of it goes to heating and cooling. Straight reduction of heat and cool used is unlikely, given our addiction to comfort. Higher efficiencies by way of insulation will have to be built in or retrofitted.

Solar-powered cooling presents the biggest opportunity to replace dirty electricity with renewable electricity, since peak sun corresponds to peak coolth. Heating is another matter, since the peak demand is counter-cyclic to solar electricity, though it does correspond to peak wind.

Residential electricity accounts for a third of the average American’s carbon footprint. If you own your home, you have the most vital ingredient to replacing all that dirty electricity with solar, a place in the sun. Most Utah houses have enough space on their roofs to provide all the electricity they need and then some.

The first step to a solar system of your own is to reduce the amount of electricity you use. Every dollar spent reducing your electric bill will save you five dollars in the cost of that solar system.

Electrical consumption for lighting and entertainment is decreasing as LEDs replace compact fluorescent and incandescent lights and really compact fluorescents replace energy hog cathode ray tubes for displays. New generations of household appliances such as refrigerators, freezers, clothes dryers and dishwashers are three to four times as efficient as older appliances. This will probably be your most lucrative opportunity. (How old is “older”? This varies from appliance to appliance. Check out http://lifehacker.com/5873658/what-appliances-are-worth-upgrading).

Solar electricity for domestic heating and cooling may have to wait a couple of years until efficiencies and system costs continue to fall. In the not too distant future it will be possible to have an all-electric house without emitting an ounce of carbon dioxide.

The accompanying chart shows where you can reduce your electricity usage as well as how much carbon dioxide each use emits per year. You math whizzes can earn extra credit and incentive by calculating your lifetime carbon burden.

As they say, “Mileage may vary.” This discussion and table are based on national averages, but they give a good idea of how much electricity you use and how you use it. A better guide is to round up the latest year’s worth of power bills. An average user’s annual electricity costs about $1,344. Imagine reducing that to zero!

The immediate goal is to never build another fossil fuel power plant—coal, natural gas or anything else. That means that as fossil fuel plants age, they will be replaced with renewable energy sources. Electricity consumption in the United States has plateaued even as our population increases. It should be relatively easy. We also have the unavoidable/inexorable mechanism of capitalism on our side. The return on investment for a solar project is now greater than for a fossil-fueled power plant. If there’s one thing a capitalist hates, it’s shoveling good money after bad.

The longterm plan should be to eliminate your carbon footprint. It’s entirely possible within a five or 10-year timeframe. The cost of rooftop solar is steadily going down and will continue to do so for the foreseeable future. Economies of scale, competition and innovation are the main reasons for my optimism.

Now, before investing in solar panels, focus on reducing your electricity consumption. Next month we’ll talk about how easy it is to put a solar system on your roof.

P.S. I was going to write something about the Grand Staircase Escalante and the Bears Ears National Monuments and the Trump administration’s futile efforts to revive the coal industry, but reducing your fossil fuel-generated electricity demand is, apart from supporting legal efforts to overturn Trump’s decision, the best thing you can do to make sure those public lands are never mined.

This article was originally published on September 2, 2017.