This morning, when I went out to tend to and mingle with the flock, I happened to see one of our old hens, Groucho, a lovable black sex-link, hanging out in the Big House, a wing of the bird coop that once served as Katherine and her sister’s childhood playhouse. All the other chickens were milling around the peeper pen, and Groucho and the older hens — Mama Cass, Li’l Red and Mary Poppins — typically stick to the other end of the coop, an enclosed and elevated hen house, so she seemed out of place.

“Wha’cha doin’ in there, Groucho?” I asked her as I entered the coop. Groucho gave a couple clucks and hunched down into her submissive position — tucked close to the ground, her wings kind of hunched up, head poking out — and then I noticed two of the ducks were in there as well. I’d never known them to go in the Big House. My immediate thought was that they looked slightly guilty. They didn’t seem as anxious or wigged out as they usually do whenever I get near them, especially because they were basically cornered in there.

Earlier this week, I bought a couple new light bulbs for the coop because with daylight down to 12 hours a day, we need to begin adding supplemental lighting if we want eggs. Even Mary Poppins, our most reliable layer, hasn’t laid recently.

So I was understandably surprised to see them there, tucked in a corner of the coop among a fluff of feathers and straw and earth: a gorgeous clutch of eggs, nine in all, most of them a sooty white, two of them the pallid orange indicative of a Rhode Island Red pullet.

I should have immediately grabbed the camera, but I was just too excited. As the birds shuffled out of the coop, I gathered the eggs in a fold of my fleece jacket and brought them inside for inspection.

From what we’ve read, Cayuga ducks lay black eggs near the beginning of the season, and as the year progresses, their eggs gradually lighten. I had taken the dirty appearance of many of the eggs as just that — dirt. But as I set about washing and cleaning them in the kitchen sink, little of the grime washed off, leading to a really exciting Friday-morning surprise: OUR DUCKS ARE LAYING! (It also led to an admittedly odd and verbally cumbersome blog title — “egg” + “surprise” = “eggsurprise”! Yeah, I know… Just go with it.) 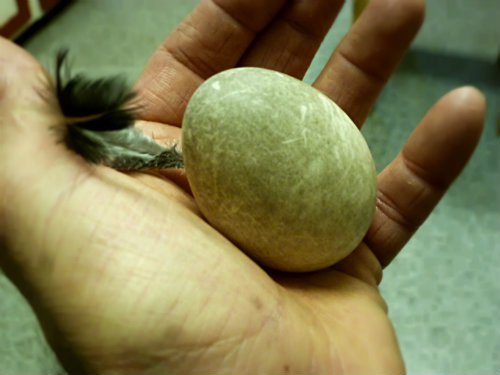 The eggs are deceptively heavy in hand, about the size of a large chicken egg, and their shells, which feel quite durable, have a kind of soft, matte finish. I find their disheveled appearance rather beautiful. I’ll have to photograph some duck and chicken eggs side-by-side for comparison.

I assume the duck hen(s) responsible for the eggs had been setting on the eggs, and do have plans to buy an egg incubator, but I think we’ll hold off on letting the eggs develop for the time being. Winter is (hopefully) right around the corner, and duck incubation takes about a month, so if we allowed them to hatch we’d have to rear the chicks during the year’s coldest months. As far as I see it, the best plan is to wait to spring and then let some eggs develop in the incubator, then we’ll offer the hatchling peepers free to kindly homes and beautiful people.

If you’re interested in providing a home to either Cayuga ducklings or American buff goslings next year, please send me an email. First come, first serve.

In the meantime, I can’t wait to cook up some duck eggs and use them in my baking! Any suggestions?

I’m going to candle the eggs later today to check for embryo development, so more pics and updates to come shortly.

Also, I just found a thread posting on the backyardchickens.com forum by a gal in Kildare, Wisc., with the handle Sweetfolly who candled her duck eggs throughout their development. Pretty cool!