The man behind the movement toward organic and biodynamic wines in Utah. Also: ORGANIC AND BIODYNAMIC WINE CAMP: Utah restaurateurs learn the ropes, by SCOTT EVANS. 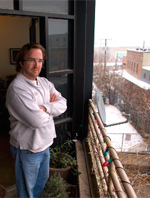 Taking the evening’s first sip of deep red wine, Francis Fecteau reflects on its quality. “Any other winemaker would take the Grenache grapes from Old Hill winery and make a big, heavy, porty, nasty, jammy thing that people would go crazy about and would earn big scores in the wine press. But it would be a soulless, flabby, sugary wine.”

Taking the evening’s first sip of deep red wine, Francis Fecteau reflects on its quality. “Any other winemaker would take the Grenache grapes from Old Hill winery and make a big, heavy, porty, nasty, jammy thing that people would go crazy about and would earn big scores in the wine press. But it would be a soulless, flabby, sugary wine.” He says this with an authority typically absent from men wearing New York Yankees t-shirts. “Instead, Old Hill creates an expressive and aromatic wine. Its scent is one of the most intoxicating things I have ever smelled in my life and I will remember it until I die.”

Such passion for the sensory pleasures of life and the skill to translate them into words is the born talent of poets. In this case, such gifts also belong to wine broker Francis Fecteau.

Affectionately called ‘Franco’ as a child by his family’s Italian maid and a neighboring music professor, Fec­teau spent the first seven years of his life in Italy. Born in the fiery, mafia-ridden city of Napoli (Naples) to American parents, he learned early on to appreciate the finer, and Italian, things.

When his family relocated to the United States Francis moved right into a second- and third-generation Italian-American neighborhood in upstate New York. Spending the next few years of his life among these Soprano-style Italians solidified his feeling of place and comfort in the culture. “When I walk into Italian delis there is a strong sense of familiarity. It is the same comfort I feel around people with lots of vowels in their last names, it reminds me of where I came from and who I am.”

In 1983 Fecteau arrived in Salt Lake City, a uniquely affordable place that allowed him to “eat and go to school at the same time.” He earned his undergraduate degree in English Literature, and nearly a Masters in public administration. But life led Fecteau back to his roots.

“I received an offer to be a chef and left school just as I was to begin work on my thesis. After a few years one of the local wine brokers offered me a position.”

Utah, as many know, is a unique place especially when it comes to the liquor laws. In technical terms it is a “control state” meaning that one body controls the sale, purchase and distribution of a product. This strict government oversight of alcohol entering and being sold within state borders actually makes Utah an ideal place for wine brokers. “Wineries have a terrible time approaching the State by themselves and not getting lost in the bureaucratic shuffle,” explains Fecteau. Wine brokers step in to assist the transaction between producer and buyer. Then they must reach the consumers. “If they do get past that point, their wines often sit ignored on a shelf because no one knows who they are or what they taste like.” That’s where education comes in.

In 2005, after a few years of working for wine broker companies large and small, Francis Fecteau began Libation, Inc. Beyond brokering, he goes the extra mile to help us all cultivate our “inner wine geek,” as he puts it.

Read his newsletter and you will see this is a perfect career for an English lit and business administration major. His prose reveals finely honed sensory skills. And it accomplishes the task of making a life without good wine seem somehow shallow, or unneccessarily ascetic. Which is not to say he will be a broker forever.

“The wine business snuck up on me. Originally, I thought that I would do it for a while and move onto some­thing else, and I still think that. But there is nothing wrong with enjoying what you are doing and being good at it. And if you can have that all happen at once, you are very lucky.”

Utahns are also very lucky that Francis Fecteau followed his calling here. When Fecteau finds a wine that strikes his fancy he stops at almost nothing to get it. As he puts it, “I put on my tap dancing shoes, give the State of Utah my sales pitch and they agree to distribute it.” Fecteau’s fine promotion of such wines following their approval and purchase by the state assures their appearance on local restaurant wine lists including Mazza, Metropolitan and the Wild Grape. His wine promotion also extends through e-Libation, his electronic newsletter, and occasional wine classes at Caputo’s Market. “I educate consumers,” says Fecteau, “to maximize a wine’s distribution.”

Thanks to Fecteau’s tap dancing and marketing skills, Utah is actually becoming a good place to buy wine. Not only is it good, it is exclusive. Marveling, once again, over the flavors of the wine before us, Fecteau recalls how one winemaker’s grenache made its way to Utah. “I tasted a grenache at Jerico Vineyard and I was bowled over by its quality. After cajoling him for days he finally gave me a pallet. Now Utah is the only other place in the country that this wine is available other than at the Jerico tasting room.”

When not promoting or imbibing wine, Francis Fecteau lives the life of a healthy, modern man. A practitioner of yoga and four-time participant in the Lotoja bike race, he maintains an active lifestyle. In the summer months, his urban balcony overflows with the fruits of hand-tended florals and edible greens. It is such personal affection for a healthy and earth-centered life that has led Fecteau to concentrate his wine business on the promotion of organic and biodynamic wines.

“Two years ago I couldn’t sell organic or biodynamic wines with a gun. The public perceived it as hippie, touchy-feely nonsense.” Fecteau, watching products like USDA-certified organic eggs fly off grocery store shelves, wondered why organic wines languished, dusty and neglected, on the racks. “No one understood that it was simple, clean, responsible farming.”

But with a little work and persistence, Francis Fecteau and Libation have been changing that trend.

Fecteau is visibly pleased with the maturation of wine tastes in Utah, and still can’t sing enough praises for those choices. “Organic and biodynamic producers,” he says, “actually bring their vineyard sensitivity to the barrel and the fermentation rooms. They pay close attention to the physical indicators of ripeness. Ultimately their work makes for a more nu­anced and varietally correct product.” Just as Francis Fecteau’s close attention to the detail and nuance in the finished product is helping Utahns choose better wines.

Subscribe:
For a free subscription to the e-Libation Wine News, email Francis Fecteau at francis.fecteau@gmail.com. Or visit libation.typepad.com/